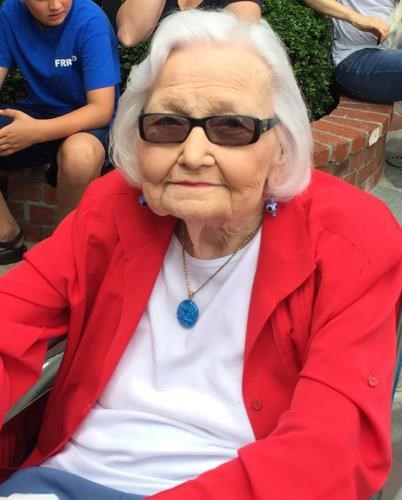 Ann WrightAnn Wright died peacefully on Jan. 30 at Seashore Point Wellness Center in Provincetown, Mass., from complications of pneumonia with her daughter at her side. She was 93.
Ann was born Martha Ann Barrow in San Antonio, Texas, graduated from Taft High School and went on to get a degree in journalism from Southern Methodist University. Soon after, she met the love of her life, Cliff Wright, and in 1949, they married in California and put down roots in the Bay Area. Although she was to pursue a number of passions, it was in her role as the consummate kindergarten teacher that she truly achieved excellence, touching the lives of hundreds of Sunnyvale 5-year-olds in ways they still talk about. When she retired in 1985, she was a charter member of the Sunnyvale School District Hall of Fame.
During the years just prior to retirement, Ann and Cliff built a round house in the middle of a redwood forest in Boulder Creek and spent the first years of retirement enjoying the house and playing golf. During her golfing days, Ann managed to get three holes-in-one.
Eventually, however, the demands for maintenance at the Boulder Creek house became too much and the couple moved to Portland, Ore., where they lived their last years together, marked by frequent trips to Hawaii, the East Coast, Canada, Europe and many local golf excursions. They lived well and enjoyed the Northwest lifestyle for four years until Cliff started showing signs of dementia, which turned into full-fledged Alzheimer's disease by 1994. When he passed away in 1996, Ann returned to the Bay Area and took up residence in Rossmoor, the retirement community between Walnut Creek and Lafayette.
In 2014, she moved to Cape Cod, where she spent her last years in the comfort, safety and camaraderie of Seashore Point, and loved nothing better than wheelchair trips into town for ice cream, fish and chips or just to people-watch. Ann Wright was, at her core, a seeker, born of curiosity and imbued with a relentless desire to both create and improve.
She is survived by her daughter, Robin, and her wife, Jan Graham, of Provincetown; her son, Mark, and his wife, Karen Petterson, of Redwood City; grandsons Joshua Richardson of Chicago and Benjamin Richardson of Carmel, Ind.; her granddaughter-in-law, Sandi, and her great-grandchildren, Helena and Otis. Services will be held at a later date.
Published by San Francisco Chronicle from Feb. 2 to Feb. 3, 2019.
To plant trees in memory, please visit the Sympathy Store.
MEMORIAL EVENTS
To offer your sympathy during this difficult time, you can now have memorial trees planted in a National Forest in memory of your loved one.
MAKE A DONATION
MEMORIES & CONDOLENCES
2 Entries
Sending my condolences to the family. May God give you peace and strength during this difficult time. (Ps. 29:11)
February 9, 2019
May the God of all comfort sustain your family during the days ahead Psalms 119:76
February 5, 2019
Showing 1 - 2 of 2 results