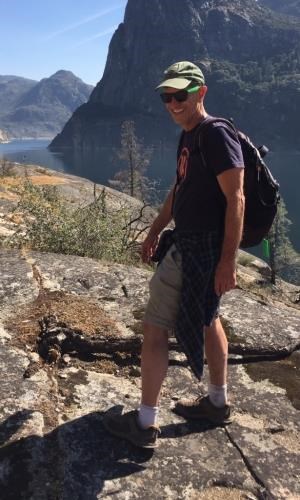 Son of Carol Terry and Jeanne Louise Guthrie Owen, Barry was born in San Antonio, TX on October 21, 1952. At six months he moved with his family to the San Joaquin Valley town of Atwater where he grew up and became a Californian through and through.

Barry was a hiker, a forest fire fighter, an editor and voluble raconteur, mentor and friend to many, and partner and husband. He was devoted to sharing his beloved San Francisco and the natural wonders of California. His gospel was the outdoors and he served as the high priest of high spring. Hikes with Barry were threaded with Latinate liturgies of botanica and spiked with cries of rapture. His writing could crackle with ecstasy, swoop and curl then alight on a playful phrase, yet always remain clear.

He was predeceased by his parents, and brother Kip.

A memorial celebration will be held Monday, May 24, on the lawn at the National Aids Memorial Grove in Golden Gate Park at 1pm. Bring your own chair, lunch, champagne glass, bottle, toasts and memories. We'll raise a glass or two.

Memorials are suggested to The Save the Redwoods League, South Yuba River Citizens League, or the National Aids Memorial Grove.

Published by San Francisco Chronicle from May 19 to May 21, 2021.
To plant trees in memory, please visit the Sympathy Store.
MEMORIAL EVENTS
May
24
Memorial Gathering
1:00p.m.
on the lawn at the National Aids Memorial Grove
Golden Gate Park, San Francisco, CA
MAKE A DONATION
MEMORIES & CONDOLENCES
1 Entry
I knew you not, but those who did held you in their hearts so close, and so by holding them in my heart, I knew only a bit about you!!
Gretchen Esping
Acquaintance
May 24, 2021
Showing 1 - 1 of 1 results