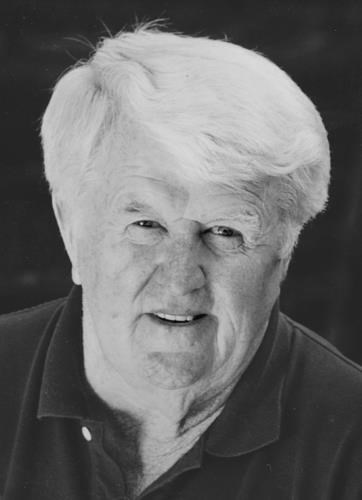 BORN
1933
DIED
2017
FUNERAL HOME
Duggan's Serra Mortuary
500 Westlake Avenue
Daly City, CA
Bernard Patrick KellyPassed away peacefully on December 6, 2017 at the age of 84. Bernard was born on August 2, 1933, the second of seven children of Irish immigrants Bernard and Mary Kelly. He is survived by his son John Kelly, his step-daughters Marsha Heckman, Cathy Obiedo, and Claudia Allin, his 13 Grand and Great- Grandchildren and his siblings Dolores Ernser, Walter Kelly, Kathleen Carouba and Thomas Kelly. He was preceded in death by his wife Diane Kelly and his sisters Susan Kennedy and Mary Hudson.

Born and raised in the Mission District of San Francisco, Bernard attended St. Paul's Grammar School and graduated from Sacred Heart High School, class of 1951 – where he was a stand-out athlete. After high school, he spent two years in the U.S. Army before going to the University of California Berkeley on a baseball scholarship. As a star center fielder, Bernard was integral in helping the Bears win the 1957 College World Series, and was later signed by the St. Louis Cardinals. Bernard quickly rose through the Cardinals' Minor League system – on his way to the Major Leagues when an injury prematurely ended his career.

At the conclusion of his baseball career, Bernard returned home to San Francisco to begin a career in Real Estate development. In 1960 he met and fell in love with a beautiful cocktail waitress - one of the famed "Gold Street Girls", named Diane Simpson, and in 1963 they were married. Not long after, he started Bernie Kelly Realty and subsequently, Diamond Properties – with partners Tom Hayes and Dan Brosnan. Bernard later returned to Law School and in 1984 passed the California State Bar Exam.

For the past 50 plus years, Bernard managed a successful real estate and development business from his office in the Glen Park District of San Francisco. The "Mayor of Glen Park" as many called him, Bernard was well loved in his community and known throughout the city. He was a founding member of the San Francisco Irish Cultural Center, is enshrined in both the Sacred Heart Cathedral Sports Hall of Fame and the San Francisco Prep Hall of Fame for baseball, basketball and football - and was inducted into the University of California Berkeley Hall of Fame for Baseball.

Bernard was a strong, smart, good natured man, who believed everyone deserved a "fair shot" in life and rooted for all to succeed. He loved and looked after his family, loved the Giants, 49ers and Cal Bears, and was himself a San Francisco legend. He will be sorely missed by all that had the pleasure of knowing him.

All are invited to attend a memorial mass in Bernard's honor at St. Paul's Church (Church and Valley Sts.) in San Francisco – Wednesday December 20th at 10:30am. In lieu of flowers the family requests donations be made to St. Paul's Preservation Fund, 221 Valley Street, San Francisco, CA 94131.

ed more like him now more than ever.
December 18, 2017
A terrific Person and San Francisco legend. God Bless Him.
Tony Hall
December 18, 2017
Bernie was my landlord for over 40 years. He and Tom Hayes both loved Glen Park and had deep ties to the community.Both of these men will be missed.
Teresa Camajani
December 16, 2017
He was instrumental in stopping freeway, up Bosworth St. next to his office.I Talked with him many times as he was patrolling DIAMOND ST.
December 16, 2017
Showing 1 - 4 of 4 results