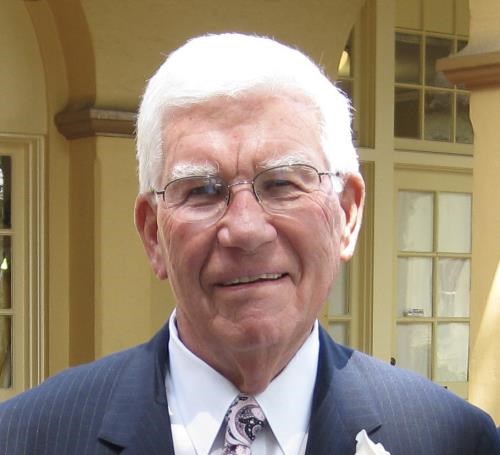 After graduation, Chuck served as a U.S. Army second lieutenant and married high school sweetheart Joan Frederickson. The couple had two children, Craig (Eleanor) and Kathy (Tony) Gallo, and lived in Ohio, Kansas, and New Jersey, before settling in San Mateo in 1972, where Chuck transitioned from a sales career with the Wall Street Journal to his true passion: hotel management. The textbook definition of a "people person," Chuck's affability toward staff and guests defined his time as general manager at Hyatt branches in Burlingame and San Jose, and at San Francisco's Sir Francis Drake Hotel.

In retirement, Chuck doubled down on his role as family patriarch, caring deeply for his wife, children, grandchildren Eric and Emma Brown, siblings, and nieces, not to mention many dear friends. He also enjoyed golf (as a Palo Alto Hills member) and 49ers football (as a season ticketholder), and he participated in SIRs and the Congregational Church of San Mateo.

As his health declined, Chuck was cared for by his dedicated wife, Joan; they would have celebrated 68 years of marriage on March 22. Chuck lit up any room he was in and will be dearly missed by all who knew him.
Published by San Francisco Chronicle from Mar. 4 to Mar. 7, 2021.
To plant trees in memory, please visit the Sympathy Store.
MEMORIAL EVENTS
To offer your sympathy during this difficult time, you can now have memorial trees planted in a National Forest in memory of your loved one.
MAKE A DONATION
MEMORIES & CONDOLENCES
0 Entries
Be the first to post a memory or condolences.