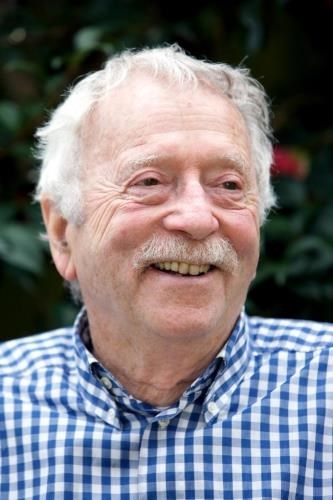 On May 3, 2019, Darril Hudson died peacefully at his home in San Francisco, surrounded physically and in spirit by the many people who loved him dearly throughout his life. He was eighty-seven years old.

Darril was born in a small town in Oklahoma and moved to the Bay Area as a young child. As a junior in high school, Darril boarded a freighter as a ship hand and set sail to the Far East, demonstrating a passion for travel which remained with him throughout his lifetime.

After returning home, Darril enrolled at the University of California Berkeley where he graduated Phi Beta Kappa with a degree in International Relations. After serving as an officer with US Army Counter Intelligence, Darril moved to England and earned his master's degree and doctorate from the London School of Economics. It was there that he met the love of his life, and his partner for thirty-three years, Peter Boesch.
Darril and Peter returned to San Francisco in the mid-1960s, where Darril assumed the post of Professor of Political Science at Cal State East Bay. He served his students and faculty well during the course of his long and distinguished career, including his time as a Fulbright Professor at the University of Heidelberg. He retired as Professor Emeritus with Cal State East Bay in the early 1990s.
As might be expected by the efforts of two exceptionally clever and industrious people, Darril and Peter prospered. This prosperity allowed them to travel to faraway places and spend leisurely summers at their 11th century mill in the Loire. They cherished their time together until Peter's untimely passing in 1995, a passing which Darril grieved to his last breath.

Darril was a great lover of music and the arts. He donated generously to the Conservatory of Music and the San Francisco Opera, and sponsored public art at the London School of Economics. He was also a generous supporter of educational and humanitarian organizations, including Doe Library and International House at UC Berkeley and the San Francisco-Marin Food Bank.

Darril was among the most thoughtful, kind and generous men any one could ever hope to meet. He amassed friends easily and kept these friendships throughout his life; and all of his many friends throughout the world now deeply mourn his passing. His death leaves a chasm in the lives of all who loved him.

Our thanks are extended for the fine care that Darril received with Alegre, Geriatric Care Solutions, and Pathways, and to Michael Garde, whose attentiveness over the past three years was exemplary. But beyond all others we must acknowledge and thank Richard Neveu, who was Darril's constant companion and caregiver for the past seven years. Richard's extraordinary care, compassion and attentiveness toward Darril vastly enriched Darril's life in his final years.

A funeral service will be held at Holy Innocents' Episcopal Church, 455 Fair Oaks Street in San Francisco on Friday, June 14, 2019 at 5 pm. Friends are invited to a reception following the service. For location details, please call 510 559 3534. In lieu of flowers, please kindly donate to the Alzheimer's Foundation of America.

Deep Peace of the flowing air
to you

Deep Peace of the quiet earth
to you

Deep Peace of the shining stars
to you

Deep Peace of the gentle night
to you

Moon and stars pour their healing light
on you

Deep Peace to you.