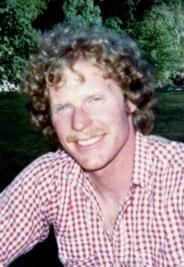 Devoted Son, Cherished Husband, Much-Loved Father, Treasured Brother, Dear Uncle and Friend
A native San Franciscan and lifelong resident of Bernal Heights, David lived his whole life on Prentiss Street. He attended Immaculate Conception Elementary, Sacred Heart High School and City College of San Francisco. For almost forty years, David was a proud member of Local 6, Boilermakers/Shipfitters. A skilled craftsman with an infinite talent for invention, he was a handy man to have around both at work and home. His mischievous sense of adventure inspired fantastic solutions to all sorts of problems.
David was strong and resilient. The same courage that made him love riding his Harley allowed him to open up spiritually and emotionally. He was an active parishioner of St. Kevin Church, a lector, catechist, member of the Family RENEW Prayer Group for more than a quarter-century. He was honored to share his faith with his godchildren, Keith Lackey, Rachel Cattaneo, Lauren Hayes and the late Daniel Arroyo, and served as a role model to neighborhood children, especially Cindy and Carol Umanzor and the children of the RENEW group. A gifted volunteer, he could always be counted on to help with anything from tending bar to delivering Thanksgiving food baskets to the needy. He was an incredible friend to many people.
David had an enormous love of the good things in life, be they small or large. He loved a great party and was an enthusiastic dancer. Running around Bernal Heights Hill, walking his dog Tre on Cortland Avenue, supporting Jenna and Kevin at their sporting events, traveling with Gail, relaxing at the Cabin at Fallen Leaf Lake, he always found beauty and joy.
He was generous in all ways, but especially enjoyed sharing the hospitality of the home he built with Gail. With plentiful food accompanied by flowing beer, good wine and fine spirits, each party was a veritable feast. Almost anything could justify a celebration, but he was in his glory as the host for viewing important sporting events, rooting for the SF Giants, 49ers and Navy football.
During the last three years, David took advantage of experimental treatments, willing to take risks to prolong his life, to stay with his family, the people he loved so much. He never saw his cancer as a battle, but as part of the journey of life, with God walking with him, leading him along.
He looked with pride and joy at his legacy: the woman and man his children have become and life he shared for thirty-four years with Gail, another lifelong resident of Prentiss Street. Theirs was the love story of the boy down block and the girl up the street, a love he would not leave except to go to God.
Now in the loving arms of God's embrace, David joins his grandparents, beloved parents, Vivian and Jean De Ceoursty, his in-laws, Beatrice and Carlo Nocito, Rachel and Bill Spingola and Joe Nocito, and nephew Daniel Arroyo with his fiancée Christina and Baby.
In this world, he is greatly missed by his loving wife, Gail Nocito De Ceoursty; daughter, Jenna Rose De Ceoursty, and her fiancé, Jeffery Mortensen; son, LT Kevin De Ceoursty, USN; sisters Vivian Arroyo and Elaine (Wayne) Lackey; brother-in-law Vince (Darlene) Nocito and Dorothy Nocito; nephews and nieces Nicholas (Jenn) and Marc (Nancy) Arroyo; Erin (Lucia) and Keith Lackey; Dina (Paul) Achiro; Elaina (Ron) Bland; Dorice and Joseph Nocito; Vincent (Julia) Nocito; and all of their children and grandchildren; cousins and dear friends.
David's family thanks his caregivers: the staff of Kaiser Medical Center's Oncology Infusion Center, especially Pilar, "Saint" Anna Dowling, RN, and Raymond Liu, MD; the nurses and staff of Pathways Hospice; and the family and friends who lovingly gave their time and attention to insure he was treated with love, dignity and respect.
Friends may visit from 10AM to 4PM on Tuesday, September 23 at the chapels of Valente Marini Perata and Co., 4840 Mission Street, SF and after 5PM on Tuesday at St. Kevin Church, 704 Cortland Ave, SF, followed by a Vigil Service at 7PM also at church. A Funeral Mass will be celebrated on Wednesday, September 24 at 11:30AM at St. Kevin Church. Committal to follow at Holy Cross Catholic Cemetery.
In lieu of flowers, donations in David's name may be made to the American Cancer Society, the American Lung Association, or the St. Vincent de Paul Society-St. Kevin's Conference, 704 Cortland Ave., San Francisco 94110

From your union brothers and sisters at the Bethlehem Shipyard Museum.
William Perez
September 24, 2014
I am deeply saddened to hear about David's passing. He was a lovely and kind neighbor, always smiling and always willing to help. The light on Prentiss street will shine a little darker without his presence.
Vanessa Spang
September 23, 2014
It's good to know some things never change. David was that kind of man when I first knew him at Sacred Heart. Always positive, always helpful and a pleasure to be around. I'm very sorry for your loss, it is a great one.