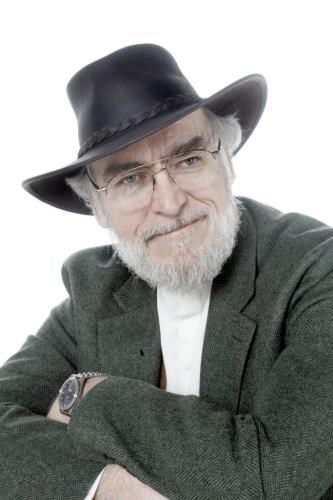 David C. McGaffey, Ph.D., professor, diplomat, actor, and storyteller, died in his home in Alameda, CA, on April 14 after a long battle with cancer. He is survived by his wife of 56 years, Elizabeth; three daughters, Jennifer, Margaret (Colin) and Deirdre (Chad); and two grandsons, Sean and Jacob.

David, son of Donald and Rosalee, was born in Michigan in 1941, one of 6 brothers. After completing primary school in 5 years, he attended high school at Assumption in Ontario. At 15, he entered the University of Detroit, and after a two-year sabbatical, returned to complete his education with majors in theater, folklore, psychology, and math. His Catholic faith has always been a key part of his life from serving as an assistant to Fr. Panigati, Bishop of Kabul, Afghanistan, to serving as a lector, Eucharistic minister, and RCIA teacher at St. Joseph Basilica in Alameda.

While at U of D, he met his future wife. One month after their June wedding, the two of them entered the Peace Corps and went to teach in Afghanistan beginning a lifelong journey together. Next David joined the State Department and their travels took them to every continent except Antarctica. David's negotiations ranged from adjudicating a murder case in the Philippines to participating in the formation of Bangladesh. After he successfully managed the safe evacuation of 2,500 Americans from Iran during the 1979 revolution, he was posted to the State Department's Foreign Service Institute to share his negotiating skills. He then served as Deputy Chief of Mission in Guyana during a year-long absence of the Ambassador, was the U.S. representative to the United Nations Food and Agriculture Organization, and was part of a team that evaluated the operations of several U.S. embassies. During this time, he published four non-fiction books about diplomacy and was working on a children's book about a dragon.

While in the diplomatic service, he received his Master of Systems Analysis at Harvard University's Kennedy School. Then after his retirement, completed a Ph.D. in International Relations at Johns Hopkins University's School of Advanced International Studies.

He returned to teaching in Portugal at European University and in Sierra Leone guided the establishment of an MBA program for the national university. When his wife retired, they settled in Alameda, and he began teaching at Holy Names and St. Mary's Universities. In 2010, he taught negotiations, international trade, and cross-cultural management to students from over 40 countries on the Scholar Ship as they traveled around the Cape of Good Hope from Hong Kong to Amsterdam. The following year he went to Macedonia as a Fulbright Senior Specialist to assist the American University of Skopje in gaining U.S. accreditation.

David was a teacher first and foremost. He was also a powerful and awarded negotiator, a talented actor, a generous storyteller, an enthusiastic singer, a voracious reader, a consummate host, and an incurable punster. Those who knew him, whether as family, friend, or student, speak of the impact he made in their lives--how he was an extraordinary man and larger than life. He will be missed.

His service was held at Greer Mortuary, Blanding Avenue, Alameda, CA, and is available for streaming on their site. In lieu of flowers, please donate to Nothing But Nets (nothingbutnets.net).

To plant trees in memory, please visit our Sympathy Store.
Published by San Francisco Chronicle from Apr. 26 to May 2, 2021.
MEMORIAL EVENTS
No memorial events are currently scheduled.
To offer your sympathy during this difficult time, you can now have memorial trees planted in a National Forest in memory of your loved one.
MAKE A DONATION
MEMORIES & CONDOLENCES
2 Entries
With deep heart-felt condolences, we pray for you and your family to receive faith and strength for this very difficult time.
Ricardo & Marli Gray
June 28, 2021
My father, my professor, my mentor, and my muse. You will be missed
Deirdre Schwein
Daughter
May 16, 2021
Showing 1 - 2 of 2 results