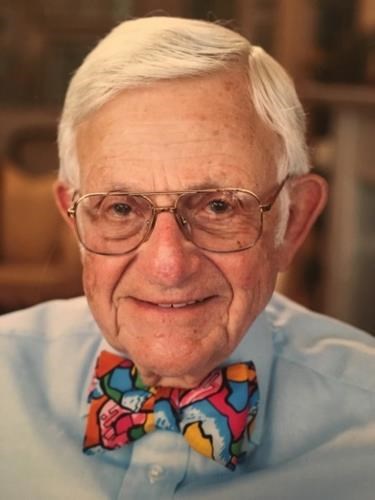 Edgar Schoen, M.D., passed away peacefully in his sleep on August 23, at his home and surrounded by family. Ed was ninety-one years old and lived a long and fulfilling life. He considered himself lucky with love, career, family, and friends. Ed was born in Brooklyn, New York in 1925, and grew up during the Great Depression. His early life was shaken by the loss of his mother, Mathilda, who died of breast cancer when Ed was ten years old, and his sister Ruth was six. Ed's mother was a highly intelligent, caring, and stimulating individual who guided his future life even in her absence, having provided him with a special start. His father, Irving, was a warm and affectionate man who played the role of both caregiver and provider, often working two jobs to ensure that Ed and his sister had a good education, and the love and attention that they needed. Ed was an excellent student, attending Tilden High School in Brooklyn, and entering the University of Illinois at age sixteen. Two years later, he enlisted in the U.S. Navy's V-12 training program. In 1944, Ed completed his undergraduate pre-med degree, and was sent by the Navy to New York University's School of Medicine. In 1948, Ed received his M.D. at the age of twenty-two. Following his internship, he began pediatric training at Massachusetts General Hospital in Boston. In 1950, at the start of the Korean War, Ed was called up by the Navy and served two years as a Flight Surgeon on aircraft carriers. Following the Korean War, Ed returned to Mass General where he completed his pediatric training with a focus on Pediatric Endocrinology. Ed's professor at the time suggested that Ed look into joining an organization in the San Francisco Bay Area that he described as "the future or American medicine." In 1954, Ed joined the Kaiser Permanente Healthcare Program in Oakland, California, where he practiced Pediatrics and Pediatric Endocrinology for forty-nine years, before retiring in 2003. At Kaiser, Ed served as Chief of Pediatrics for twenty-four years, and later joined the Department of Genetics as a Senior Consultant. He loved the practice of medicine and the care of children. Ed was a founding member of the Pediatric Endocrine Society, and the author of over 100 articles in the leading medical journals. He was elected to the Society of Pediatric Research and the American Pediatric Society, and was a Clinical Professor of Pediatrics, Emeritus, at the University of California San Francisco. In 1960, Ed married the love of his life, Fritzi Puhringer from Vienna, and they remained happily married for the last fifty-six years, raising two children, Melissa and Eric. Ed is survived by Melissa and her husband Andy Huntington, Eric and his wife Stephanie, and four grandchildren, Gabe Loza, Benjamin Huntington, Sarah Schoen, and Allison Schoen. The family spent much time together and had wonderful friends. Ed had many interests including jogging, tennis, skiing, music, theater, and writing. He could not have asked for a more fulfilling life! Ed's family would like to thank all of his wonderful caretakers and Kaiser Oakland Hospice. There is a memorial service at Temple Sinai in Oakland on Tuesday, August 30th at 11:00am. In lieu of flowers, Ed's family requests that any donations be made to either the charity of your choice or to Temple Sinai's Camp Newman Fund.

Published by San Francisco Chronicle from Aug. 25 to Aug. 28, 2016.
To plant trees in memory, please visit the Sympathy Store.
MEMORIAL EVENTS
Aug
30
Memorial service
11:00a.m.
Temple Sinai
Oakland, CA
Funeral services provided by:
Sinai Memorial Chapel
MAKE A DONATION
Please consider a donation as requested by the family.
MEMORIES & CONDOLENCES
Sponsored by Sinai Memorial Chapel Lafayette.
5 Entries
MAY HIS MEMORY BE FOR A BLESSING
Monique Bibel
June 5, 2017
I just heard of Ed's passing, and am truly saddened. Ed hired me at Kaiser Oakland and was always a wonderful mentor. I miss his poems for every significant work occasion. He truly loved his family, and never seemed happier than when I would run into him at a Little League game, or visited Fritzi and him in Point Richmond. I'm sorry for your loss.
-Arlene Fischhoff
Arlene Fischhoff
October 3, 2016
It was an honor to be able to work with Ed. He always brought joy to everything he engaged in. I learned so much from him and will always cherish the memories of working together with him on various projects and research publications.
Deepest sympathies to his family.
David Walton
August 29, 2016
A wonderful man. He did so much for humanity, well beyond his sterling role as a top paediatrician. Fond memories of visiting Ed and his family with my family in 1996. May he be remembered forever!
Brian Morris
August 29, 2016
It was a pleasure knowing him. Our sympathy and best wishes go to Fritzi,Melissa, and Eric.
Anita,Jim and Jon Cebulski
August 26, 2016
Showing 1 - 5 of 5 results