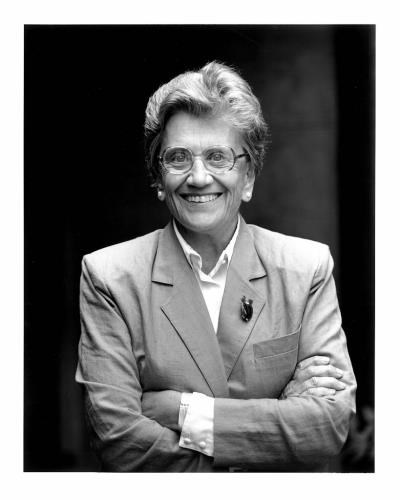 Betsey Warrick, an influential resident of Berkeley for 60 years, died at Kaiser Hospital in Oakland on June 26, of complications from surgery for colon cancer. She was 95.
With her husband Sherry (W. Sheridan) Warrick, former director of International House at UC Berkeley, Betsey helped make her home city a welcoming place for students, visitors, and immigrants from around the world. She was a born humanitarian, a lover of people, and a gifted listener who could instantly put new acquaintances at ease, capturing—then remembering—their stories in a few minutes' conversation.
Among her many accomplishments, she raised a family of three successful children, learned to paint, studied French in France, got her master's degree, taught English, served on a YWCA board, and helped launch a cultural outpost for Laotian refugees. She joined her husband at countless I-House functions greeting students and visiting scholars, most of whom thereafter counted her as a lifelong friend. She did all these things and still managed to fix delicious home meals every morning, noon, and night for the 74 years that she and Sherry were married.
Betsey was born in Norwood, Mass., to Herbert and Rebecca Fowler. Her fondest childhood memories were of spending eight weeks of each of 11 summers, swimming, canoeing, and joining in hymns and group songs at Camp Wahtonah on Cape Cod. "I was never homesick," she later wrote. As a teenager, she attended Abbott Academy, a boarding school in Andover, Mass., where she sang in the glee club and at a tea dance met Poppy Bush, a student at the adjacent Phillips Academy. Bush mentions her in the 2015 book Destiny and Power: The American Odyssey of George Herbert Walker Bush, by Jon Meacham. She said later in life that she didn't like him much.
In 1942, Betsey entered Smith College, majored in sociology and, at a fraternity dance in her freshman year, met and fell in love with a handsome junior at Amherst College who had just enlisted in the Army Air Corps. Expecting to be pulled apart by the war, she and Sherry married in 1945 near her parents' home in Norwood. The bride wore white, the groom a crisp brown military uniform.
In 1947, after his discharge and completion of his studies at Amherst, Sherry entered a Ph.D. program in history at the University of Chicago. There, in Chicago, Betsey gave birth to two of their three children: Becky (1948) and Dan (1950). They all moved in 1951 to Davis, Calif., where Sherry had signed on to teach history at the young UC campus. Son Doug was born in 1954. They lived on a quiet street with their cat Minnie Pearl and dog Casey Stengel, went on vacations in a green Chevrolet wagon, and spent lazy weekends with their good friends the Cramers at a cabin on Lake Tahoe's west shore. In her ninth year in Davis Betsey took a course from Bay Area figurative painter Roland Petersen, a contemporary of Diebenkorn's and Thibaud's. "A life-changing experience," she later said of his class on the principles of composition, and she would often say that a good painting must include a strong diagonal gesture.
In 1959, with a nod from UC president Clark Kerr, Sherry was tapped for the job of foreign student adviser at UC Berkeley, and so he and Betsey packed up the family, never to move again from their home in a wooded Berkeley neighborhood. Within two years Sherry was appointed executive director of International House, a residence hall and cultural center for foreign and domestic students.
"Berkeley was made for the Warricks," he later wrote. Betsey joined the board of directors of the University YWCA, serving for 26 years. She began teaching English at the Y, got a master's degree in education from the University of San Francisco, and for 13 years taught English as a second language at Berkeley Adult School. In 1982 she and three local women founded the Laotian Handcraft Center, on Solano Avenue, to help Laotian women acquire language and business skills while doing traditional needlework to earn money for their families. Her work with the women lasted for 18 years.
Betsey was an inspiration to every person she befriended. She was sharp and engaged, curious about peoples' lives, and devoted to the music, art, and cultures of the world to the very end. She was a lifer at the Metropolitan Opera simulcasts and last year was thrilled to attend Yo-Yo Ma's bravura performance of Bach's six cello suites at Berkeley's Greek Theater. Her eyesight dimmed and her hearing faded but she still wanted to know why tariffs were being imposed on India, of all nations. She learned the life story of every nurse who aided her in her final days.
Betsey is survived by her husband Sherry, older brother David, daughter Becky and her husband Ron, son Dan and his wife Karen, son Doug and his daughter Ali, as well as by grandsons Morgan and Tom, their wives Christina and Jeanetta, and great-granddaughter Maya. She is deeply missed by all. Betsey herself suggested memorial contributions be made to the Sheridan and Betsey Warrick Scholarship Endowment, International House, 2299 Piedmont Ave., Berkeley CA 94720. A celebration of her life is being planned for the fall.

Published by San Francisco Chronicle from Jul. 2 to Jul. 7, 2019.
To plant trees in memory, please visit the Sympathy Store.
MEMORIAL EVENTS
To offer your sympathy during this difficult time, you can now have memorial trees planted in a National Forest in memory of your loved one.
MAKE A DONATION
MEMORIES & CONDOLENCES
6 Entries
So so sorry to learn this sad news...she and Sherry leave a lasting legacy of good will and good memories to all who knew them. I first met them as an I-House resident 1976-1979. Both special people who always made us feel so welcome, whether it be from across the street or across the globe.I'm so glad to hear that they reached such an unusual milestone to be married 70 years...a match made in heaven for sure...
Kathryn Anthony
July 9, 2019
I treasure the wonderful memories I have of getting to know Betsy and Sherry. I was introduced to them by my friend Bill Seelye, a relative; our conversations always were stimulating and enjoyable. They welcomed me with open arms and we shared some unforgettable meals together. I will always remember the Warrick Christmas Eve party many years ago where Sherry insisted that each guest read aloud a section from an appropriate classic literary book. Great fun. Later we would see each other at the University Section Club Drama Group. I will miss Betsy's counsel and friendship.
Ann Duncan
July 9, 2019
She's one of the most beautiful person I know, inside and out. Although we only saw each other at special events at International House such as the Sunday Suppers, she made me feel special in all our encounters. When she learned about my husband's sudden death in 2014 at the USPS, she would checked on me how I was doing and made me felt so loved. After I have named my donation on their 80th birthday and the recent Big Give under the Warricks, she sent me Thank you cards of appreciation and full of wisdom. I was reading her cards before I learned she passed away. I admire and respect her so much. I was thinking about her and what she said on those cards about her husband who she cared so much. I will surely miss her. Larnie
July 9, 2019
I am so sorry to hear this. I remember being invited for dinner at the Warrick's lovely home years ago. What a couple! So kind and generous and open to the world. She leaves quite a legacy. The world is literally a better place because of her. May she rest in peace. -Firoozeh Dumas
July 3, 2019
My heartfelt condolences to the family for their loss. During this difficult time may you find comfort in each other and in prayer. James 5:13
July 2, 2019
Losing a loved one is never easy, but our loving God promises to give the strength and courage you'll need to endure, and to cope with the pain of your loss. He also promises to hold your hand every step of the way. (Isaiah 40:29, 41:10, 13) May loving memories also sustain your family during this difficult time. Ann Smith
July 2, 2019
Showing 1 - 6 of 6 results