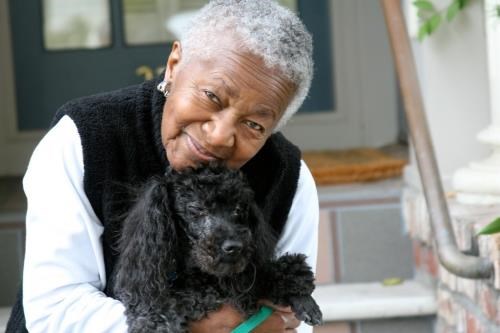 BORN
1918
DIED
2019
FUNERAL HOME
Chapel of the Chimes Oakland & Memorial Park
4499 Piedmont Avenue
Oakland, CA
Dr. Ellamae SimmonsOn Friday, May 10, 2019, Ellamae Simmons, M.D. passed away at the age of 101. Born on March 26, 1918 in Mount Vernon, Ohio, the fourth and youngest child of Augustus "Gus" Simmons and Ella Sophia Cooper Simmons, young Ellamae always dreamed of entering the field of medicine. She earned her bachelor's in nursing from Hampton University in Virginia in 1940 before serving her country as an U.S. Army nurse. After the war, she enrolled at Ohio State University as a pre-med major on the G.I. Bill, and graduated from Howard University with her medical degree in 1959.
In between her pre-med program and medical school, she married Dr. John Williams, a psychiatrist she met while they were both students at Ohio State. The two divorced in February of 1958, and four years later, she married Tuskegee Airman Lieutenant Colonel Price D. Rice, whom she met through a mutual friend. In1964 the couple moved to the Bay Area, where Dr. Simmons would live for the rest of her life, working for Kaiser Permanente until her retirement in 1989. She enjoyed being the stepmother of Lt. Col. Price's four daughters, Delabian, Diana, Daphne, and Debra. Their warm relationship outlasted the marriage, which ended in 1977.
At every turn, Dr. Simmons blazed a trail of excellence for others to follow. The first black woman physician to specialize in asthma, allergy, and immunology in the country, she also posted a raft of other firsts, including being one of eight army nurses chosen to integrate the US armed forces during World War II. She subsequently became the first black woman to live in the dorms at Ohio State, and the first black woman to join Kaiser Foundation Hospital's medical staff, where she would also help found the Kaiser African American Professional Association, or KAAPA.
In 1967, she purchased a home in San Francisco's exclusive Presidio Heights, effectively integrating the neighborhood. Soon after, she became a leader in the Bay Area's Mutual Real Estate Investment Trust, or M-REIT, helping to secure investors to buy and resell properties in neighborhoods where home ownership by people of color was previously blocked. This was the beginning of Dr. Simmons' second act as a real estate investor and activist.
Throughout her life, Dr. Simmons remained committed to creating opportunities for others. After her retirement at the age of 71, she became involved with the Osher Lifelong Learning Institute (OLLI), taking classes at the University of San Francisco. Recognizing that adult learning programs were the key to an intellectually rich post-retirement life, she brought the curriculum to her alma mater, Hampton University, in 2005. The Osher Foundation now permanently endows the award-winning OLLI program she established there. In 2008, five days after the inauguration of the nation's first African-American president, Dr. Simmons was awarded an Honorary Doctorate of Humane Letters by Hampton University, the historically black institution that had opened the first door to her dreams. She later told the story of her extraordinary life in her book Overcome: My Life In Pursuit of A Dream, which was published in 2016.
Dr. Ellamae Simmons was preceded in death by her parents, Gus and Ella, and her siblings Georgeanna, Lawrence, and Rowena. She is survived by numerous beloved family members and godchildren including niece Varian Wilson, grandnieces and grandnephews Shawna Wilson, Penni DeJarnett, Russell Jackson, Jeff Jackson, Kenneth Jackson and Chanda Terrell, several great-grand nieces and nephews, and four daughters by marriage. A funeral for Dr. Simmons's is scheduled for May 23, 2019 at Chapel of the Chimes in Oakland. The viewing will be held at 10:00 a.m. with the Celebration of Life starting at 11:30 a.m.

Shelia
May 18, 2019
She was my mother's doctor and a mentor to me in my pursuit of a career as a medical doctor. I would later learn she was a mentor to many other future physicians. She was a great woman, mentor,trailblazer and role model. She will be missed.
M Ross
May 17, 2019
Showing 1 - 4 of 4 results