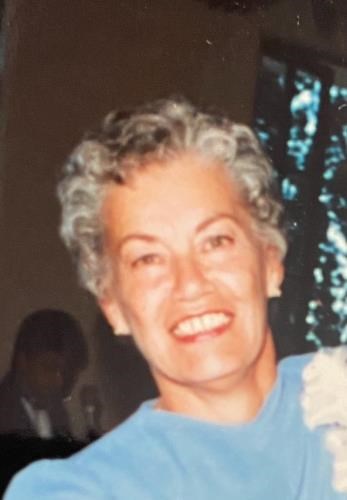 BORN
1929
DIED
2021
Esther Pezzola
June 15, 1929 – March 22, 2021
Esther (née Galindo) Pezzola, 91 passed away peacefully while residing at the Carlton Senior Living Community in Pleasant Hill, California with her family by her side.
Esther was born in San Francisco, California to Jerry Sr. and Manuela Galindo. She grew up in "The Mission", before the growing family relocated to Daly City in 1941. She attended Jefferson High School in Daly City, and graduated in 1947.

Esther met the love of her life Neil Pezzola in Daly City and the two were married on May 21, 1951. They were married for 61 years and called the Vista Grande area of Daly City home. Esther is predeceased by her parents Manuela and Jerry Sr., her husband Neil, brothers Jerry Jr., Edward, and James.

Esther spent the last 5 years at The Carlton with her beloved Dachshund sidekick Marco (RIP) and reveled in the social activities, friendships made, the proverbial gossip circles and loved all of the staff and amenities. She was an active member of the community and served two years as President of the Residents Council and was part of the Welcoming Committee. The family would like to extend their gratitude to the staff of The Carlton for their caring attentiveness during her final days.

Due to current restrictions, a private service will be held for the family before Esther is laid to rest at The Italian Cemetery in Colma, California.

In lieu of flowers donations in her name can be made to your favorite charity.
Published by San Francisco Chronicle from Apr. 2 to Apr. 4, 2021.
To plant trees in memory, please visit the Sympathy Store.
MEMORIAL EVENTS
To offer your sympathy during this difficult time, you can now have memorial trees planted in a National Forest in memory of your loved one.
MAKE A DONATION
Please consider a donation as requested by the family.
MEMORIES & CONDOLENCES
4 Entries
Louie, I am so sorry to learn of this. We have all been talking about our good times as classmates. May you know im thinking of you all. Tari Hall
Tari Hall
Classmate
April 10, 2021
I’m so sorry for the loss of your mom, Ann. She was a lovely lady. I’ll always remember her gracious hospitality and always making me feel so welcome and like part of the family. May she Rest In Peace ❤
Karen (Evanoff) Blevins
Friend
April 9, 2021
Our most heart-felt condolences and sympathies to the Pezzola and Galindo families on the passing of Esther Pezzola. My brothers and I have nothing but warm and positive memories of the time spent in the Pezzola home and the gracious hospitality that always welcomed us there. My brother Jim is especially impacted by this news as he respected, admired and loved Neil and Esther. Esther was so welcoming, friendly, strong, and a great cook - Jim loved to spend time with both of them and will forever value those memories. Esther was always so accommodating to hosting all of us at her home, whether it was after a touch football game at Jefferson, a chipping contest with Neil in the backyard or to watch the college bowl games on New Year’s Day. She was always happy to see everyone. We will treasure those times and memories in our hearts as we remember Esther.