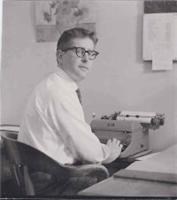 Frank Charles Kaiser, age 86, passed away peacefully on Friday, November 7, 2014 after a long illness. His family was present with him during his final hours.

Frank was born in San Francisco on April 28, 1928 to Charles Mathias and Antonia Gleisinger Kaiser, immigrants from Austria and Bohemia. He attended Mission High School where he met his future wife, Nectar Zailian. Frank loved the Cliff House, where his father worked as a waiter. In high school, Frank worked there as a busboy and later in the gift shop. During the war years when the Cal band was short on members, Frank, along with other high school students, got to perform with the band, where he played trombone. He went on to attend U.C. Berkeley where he received his B.A. in journalism in 1950.

In high school, Frank wrote an award-winning radio play, "You Can't Print That," which was broadcast nationally with Jack Webb in the leading role. He served in the Korean War as a writer in the First Radio Broadcasting and Leaflet Battalion. After service in Korea, Frank combined his love of sports and journalism to work as a sportswriter for the San Francisco Call-Bulletin. He was involved with early sports radio broadcasting for University of San Francisco basketball during the Bill Russell era. In 1958, he was elected president of the Northern California Basketball Writers and Broadcasters Association.

In the 1960s, Frank left sports journalism to become one of San Francisco's "Mad Men," working at the Lennen and Newell advertising agency. Next he worked for many years at Wells Fargo Bank in sales promotion, where, among other awards, he won two national Addy awards from the American Advertising Federation in 1975 and 1977 for his direct mail advertising campaigns. One of Frank's major contributions to the field of direct mail advertising was his use of computerized mailing list management systems.

Frank was an avid hiker in his youth, serving as a fire-fighting volunteer in the Sierra Nevada mountains. He was an accomplished amateur photographer, gourmet cook, and woodworker. He was a member of the San Francisco Bonsai Society for several years.