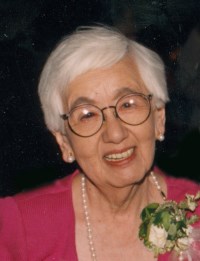 Fusako was born in San Francisco, the fourth of nine siblings and attended Girls High School in the Western Addition. The Great Depression denied her higher education and she joined her sister, Shizu to support the growing immigrant family. As a housekeeper she learned the culinary arts and needle work, in both of which she excelled. World War II and her ancestry brought incarceration, but subsequent years were much brighter. She was employed at the Misses Cox, an haute couture shop making custom-made dresses that was subsequently acquired by the I. Magnin flagship Union Square store. She frequently and fondly recalled of her employment at I.Magnin's and the generosity of Grover Magnin when he handsomely rewarded his "Magnin Girls"upon the closing of his store. She then joined the family's import store, Uoki, and continued work there tirelessly into her 80's. A devout sports fan, Fusako held season tickets for both The Giants and The 49'ers. She traveled frequently with friends and family and was able to follow her beloved 49er's to four Superbowls. She leaves sisters Asako Yamashita (Rev.John, deceased), Iku Hopes (Ted), brother, Dr. Hisaji Q Sakai, and a wealth of nephews and nieces. She was predeceased by sister, Shizu, brothers, Tamotsu, Eiji, Yozo, and Katsu. We are grateful for the extraordinary support of the saintly Dr. Catherine Madison, personal caretaker Tenzin Takhang, and the staff at The Avenues. At Fusako's request, no formal service will be held.

To plant trees in memory, please visit our Sympathy Store.
Published by San Francisco Chronicle from Apr. 23 to Apr. 29, 2013.
MEMORIAL EVENTS
No memorial events are currently scheduled.
To offer your sympathy during this difficult time, you can now have memorial trees planted in a National Forest in memory of your loved one.
MEMORIES & CONDOLENCES
0 Entries
Be the first to post a memory or condolences.