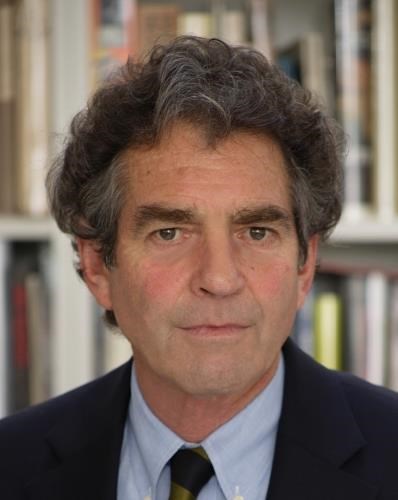 Gary Carson died peacefully at home, surrounded by family, on July 29, 2021. Born and raised in Montana, he graduated from the University of California at Berkeley in the History of Art program, studying under Peter Selz. Gary had a long career as an art advisor and appraiser in the San Francisco Bay Area. In the 1980s he was the agent for artists Bruce Conner and Stephen De Staebler, and later became the representative of the Wally Hedrick estate. He was also a chronicler of the San Francisco Punk scene, contributing to such underground publications as Search and Destroy and Damage.

Two decades ago, he began dividing his time between California and Montana. He built a home overlooking the Missouri River near Townsend, Montana, where he continued his life-long passion for bird hunting. He was equally at ease with hunting as he was in discussing Surrealism, Situationism, Bay Area figurative painting, contemporary pulp writers or Montana literature. He had an innate sense of culture and life fully lived. Gary had what some might call "the touch of the marvelous."

He was honored to have served on the Montana Arts Council. G.B. is survived by his mother P.M. Dagenais of Helena, daughter Miranda Carson of Berkeley, his wife Catherine Courtenaye of Bozeman and Emeryville, and his French Brittany pup Jasper.

Gifts in his memory may be given to the Montana Historical Society, Planned Parenthood of Montana or the ACLU of Montana.

Published by San Francisco Chronicle from Aug. 2 to Aug. 8, 2021.
To plant trees in memory, please visit our Sympathy Store.
MEMORIAL EVENTS
To offer your sympathy during this difficult time, you can now have memorial trees planted in a National Forest in memory of your loved one.
MAKE A DONATION
MEMORIES & CONDOLENCES
11 Entries
Nearly 40 years ago Gary approached me while on a fishing trip in the Queen Charlotte islands. He introduced himself and that was the beginning of our long friendship. As a result of that introduction I also met Mark Radley and Marino Bandelli who are now lifelong friends. Carson was an amazing man. So well read, so incredibly witty, a connoisseur, bon vivant, hunter, outdoorsman, father, son, husband and of course an amazing friend. I will cherish my memories and his friendship that will live on in the friends that were a result of his outgoing personality. All my love and best wishes to his family.
Rick Stokes
August 13, 2021
I used to love talking art world gossip with Gary. He had a great perspective on the contemporary art market due to his numerous contacts within the auction houses and the mega-galleries. He was a voracious reader and would often send me books that he thought would expand my knowledge of art and the wider world. I have great memories of our times together and will miss him dearly.
peter stremmel
August 7, 2021
G. B. Carson was a force to be rendered....his legacy will be honored within the art world and beyond.
Katherine
August 6, 2021
Gary was one of the most popular and colorful, and one of the most accomplished, of the HHS Class of 1968. He will be missed.
Lynn Phillips
School
August 6, 2021
My condolences to you all especially Miranda; Your Dad was very special and I was so happy to know him both personally and professionally.
Lillie Braudy
Friend
August 5, 2021
I was so sorry to hear of Gary´s passing. He was an amazing friend and we had a lot of wonderful memories throughout the years. Praying for his family.
John and Betty Brewer
Friend
August 5, 2021
I knew Gary from grade school on. He always had the class in stitches, much to the teacher's chagrin. I'm sure he has everyone laughing in heaven. God bless and prayers to his family.
David DeWolf
Friend
August 4, 2021
My deepest sympathy to Gary's family. He was a friend of many years. He will be missed. A most interesting man - I always learned a bit of knowledge from our visits.
Carol Muir
Friend
August 4, 2021
I went to elementary school with Gary in Helena. We reconnected about 20 years ago in California, and I subsequently visited his Townsend home. He was an engaging, creative, and generous soul. Godspeed, old friend.
Kennon Baird
Friend
August 4, 2021
Gary was a fine community member as an advocate for many just causes. We will miss his energy in Townsend. Always an interesting conversation to be had with Gary!
Sharon Rains Potenza
August 3, 2021
Gary was one of my best friends we went grouse hunting together he was a great person
Bob Barrett
School
August 3, 2021
Showing 1 - 11 of 11 results