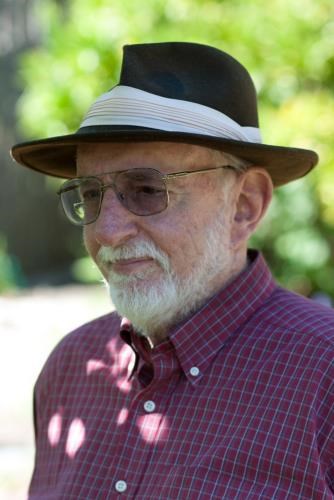 George Edward Goldman, born on March 22, 1935 in Brooklyn, New York, to the late Matilda Schacker Goldman and the late Harry M Goldman, died at age 83 on June 11, 2018 at his home in Berkeley, California, following a four-year struggle with chronic lymphocytic leukemia.
George graduated from New York University and got a master's degree at the Massachusetts Institute of Technology. He worked for 40 years as a Cooperative Extension Specialist in the Department of Agricultural and Resource Economics at UC Berkeley until retiring in 2002. During his career George contributed to research on agricultural and natural resource topics across the state and nation and published on topics as broad-ranging as the California prison industries, the wetlands of Calfornia's Central Valley, regional economic development, drip irrigation, the forestry industry, and nutrition education (contributing to the first cost benefit analysis on this topic in California). He did not let his own self-interest interfere with his work towards a more equitable society; for example, he publically fought the passage of Proposition 13 in a televised debate with the initiative's author, regardless of the fact that he would personally benefit from passage of the property tax legislation.
George took pride in his ability to conduct unbiased, fact-based analyses, and his strong background in statistics served him well in his development of widely respected economic models. His work was practical and rational, and the analyses he did were a valuable contribution to public discussion of policy issues. Following one of his publications, he was inspired to make a bumper sticker that read "Free the Type 2 Multiplier," a reference that none of his survivors understands to this day; however, our lack of comprehension did not lessen his enthusiasm one bit. His early co-authored publication on the Westlands Water District, documenting the degree to which government water subsidies were benefiting large-scale corporate farmers and not the intended small family farmers, was not well received by the Central Valley agricultural establishment, and earned him a mention in a Wallace Stegner book, of which he was very proud.
George had a wide-ranging, curious mind. He was a member of the Giannini Foundation of Agricultural Economics and enjoyed meeting with his colleagues and discussing current topics in his field. He also enjoyed folk dancing, lawn bowling, playing softball and chess, collecting books, and making obscure jokes, and he made a lifelong project of trying to get his children to acknowledge the superiority of classical music (although he did have a soft spot for Irish, klezmer, and folk music as well). He was an avid runner in earlier years, going on daily lunchtime runs in Strawberry Canyon and running marathons as well as the Dipsea and double-Dipsea races in Marin. He was a devoted father, taking his family on multiple backpacking, camping, and cabin-by-the-lake trips; tolerating a life full of cats, chickens, guinea pigs, parakeets, homing pigeons, rabbits, convalescing wild animals, and sometimes even sheep; and instilling principles of economics and statistics in his children from a young age. As his children grew up, he actively supported and encouraged them in their lives and careers. He held fiercely liberal beliefs, but always encouraged his children to develop and justify their own viewpoints, and had friends of all political persuasions. His loyalty to old friends, and his enjoyment of activities irrespective of his particular skill at them, are two traits of his that we would all do well to emulate. His personal and professional accomplishments were all the more impressive in light of his lifelong struggle with depression and anxiety.
George was preceded in death by his son, Martin Goldman, and his sister, Florence Schwartz. George is survived by his wife of 57 years, Ann Yarwood Goldman; his daughters, Sara Goldman, Polly Goldman, and Susannah Goldman; sons Steven Goldman and Gideon Goldman; children-in-law James Leap, Kelly Goldman, and Lauren Aczon; grandchildren Ben Goldman, Myla Goldman, Rico Martinez, and Otis Goldman; and many nieces, nephews, step-grandchildren and great-grandchildren.
A celebration of George's life will be held on July 7th from 2-5 pm at the Northbrae Community Church in Berkeley. The family encourages all who read this to enjoy a root beer float in George's memory.

Published by San Francisco Chronicle from Jun. 20 to Jun. 24, 2018.
To plant trees in memory, please visit our Sympathy Store.
MEMORIAL EVENTS
Jul
7
Celebration of Life
2:00p.m. - 5:00p.m.
Northbrae Community Church
Berkeley, CA
MAKE A DONATION
MEMORIES & CONDOLENCES
2 Entries
We are so sad at this loss, but so grateful for the many great years of folkdancing, camping together, running races together, raising our kids together with yours, and so much more.
Dick & Barbara Emmons
June 21, 2018
Dear Ann,

I'm so sad to hear that George is no longer with us. He was a great support when I was in grad school. I loved hanging out with him and Howard talking about regional economics. I learned so much from him. He also had a wicked sense of humor, which made life richer. I miss him. My condolences for your loss, I can't imagine. Warm regards, Sandy Hoffmann, Washington, DC
Sandy Hoffmann
June 20, 2018
Showing 1 - 2 of 2 results