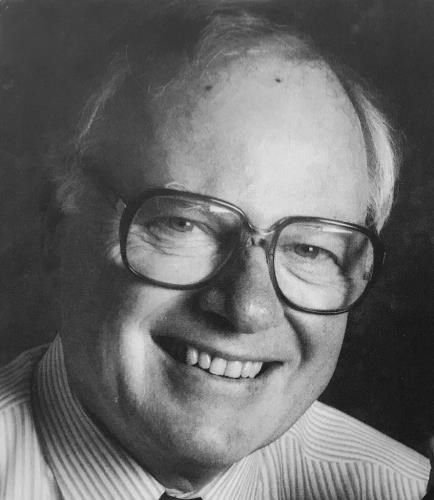 George is survived by his wife of 60 years, Georgianna, his son Andrew (Sharan Ikeda) and daughter Samantha (Ed Acosta), and his grandchildren Juzo, Kazu, Frieda and Enzo, along with several nieces and nephews. George was preceded in death by his brother, Philips Greenwood, and sister, Elizabeth (Lisa) Speake.

Born November 10, 1927, in Merced Falls, CA, he was the eldest of three siblings born to Ralph Greenwood and Mary Merle "Dame" (Elledge) Greenwood. He was raised in Klamath Falls, Oregon, where his father worked as a lumber grader, and his mother was a schoolteacher. George joined the United States Navy in 1945. After he was honorably discharged following the end of the war, he attended the University of California at Berkeley, where he ultimately graduated in 1954 with a Bachelor of Science in Civil Engineering. He was an "old Blue" for life.

George began his career as an Assistant Bridge Engineer working on the San Francisco Bay Bridge, followed by a decade with Wildman and Morris, working on buildings of all types. In 1967, George joined H.J. Degenkolb and Associates, the structural engineering firm where he happily worked for thirty years. George felt fortunate to work for Henry Degenkolb, whom he regarded as a visionary leader in his field. In 1978, he was elevated to Associate, and ultimately to a Principal in the firm. Among his career's work were additions and renovations to Bay Area landmarks including the Claremont Hotel, the UCSF Medical Center, and the Stanford Court Hotel.

George was whole heartedly dedicated to his family. In 1960, he met Georgianna Mulbarger while skiing at Alpine Meadows, and they were married several months later in 1961. While raising their family, he supported Georgianna in her career as a calligrapher, graphic designer, painter, and teacher. George and Georgianna were unfailingly supportive of their children Andrew and Samantha in their educations and careers, with the Berkeley Police Department and as a professional chef, respectively.

George is remembered for his kindness, generosity and abiding interest in people. In addition to his devotion to family and work, and enjoyment of movies, George was an accomplished carpenter and cabinetmaker, with projects ranging from building the Vorlage Ski Lodge in the mid-1960's to building his own (and later his daughter's) kitchens, as well as a wide variety of woodworking projects. He was resourceful and productive, using his "go-to" Craftsman radial arm saw and his trusty circular saw for decades until expanding his shop in the 90s with a table saw… As a younger man George was a model airplane enthusiast, and for most of his life was a car enthusiast, maintaining and repairing his own his cars until emerging technologies made it no longer a possibility.

The family wishes to express their gratitude to the Asian Network Pacific Home Care & Hospice, who provided outstanding home health and hospice care, and to the longtime private caregivers who took good and kind care of George over the last years of his life.

George gave blood often at the American Red Cross; please consider doing so in his honor or making a financial donation in his memory to the American Red Cross, at RedCross.org/donate/donation.html.
Published by San Francisco Chronicle from Jul. 29 to Aug. 1, 2021.
To plant trees in memory, please visit the Sympathy Store.
MEMORIAL EVENTS
To offer your sympathy during this difficult time, you can now have memorial trees planted in a National Forest in memory of your loved one.
MAKE A DONATION
MEMORIES & CONDOLENCES
1 Entry
Hugs and love dear George.
Robbie
Family
August 9, 2021
Showing 1 - 1 of 1 results