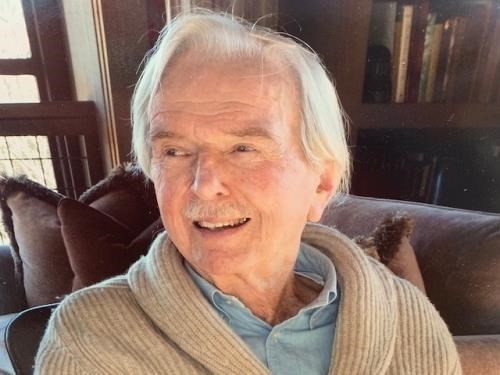 George Warren Hellyer, Jr., 99 years old, of Calistoga California, passed away peacefully on June 17, 2021 at his home in Calistoga, California. World War II vet, lawyer, accomplished oil painter/artist, author, actor, filmmaker, farmer, and world traveler. Hellyer lived a storied life that spanned nearly a century of adventures and achievements making him a rare and true modern-day renaissance man. Hellyer had been in declining health in the months leading up to his death.

George Hellyer was born March 22, 1922, and raised in San Bernardino, as one of four children. He spent most of his early years in Northern California and attended Stanford University. After graduating in 1943, Hellyer joined the U.S. Navy and spent three years in the South Pacific theater, Solomon Islands, and the Philippines.

After the war - and his service - ended, Hellyer enrolled in Stanford Law School, graduating in 1949. He clerked for a judge in the Ninth Circuit Court of Appeals for two years and then went to work for a prestigious San Francisco admiralty law firm where he would go on to make partner.

In the late sixties, approaching fifty years of age and already living a life enviable to many, he embarked on a journey of self-discovery. He relinquished the reins of his firm and in 1970 flew to Europe, eventually making his way from Paris to the Greek Island of Corfu, which would become his home for the next ten years. There he bought his second piece of property, an 1850s villa where he took up his own artistic pursuits, learning pottery. He eventually published a book about his experiences, "In Calypso's Thrall: An American Decade in a Greek Village." He studied ceramics and became an active ceramicist, using raku firing methods.


It was during this journey of self- liberation that Hellyer met a man that was to become THE most important person of his life—IRA YEAGER--- the extraordinary artist -- the love of his life. Their chance meeting at a party in San Francisco resulted in a commitment to spend their life together.

Hellyer and Yeager were eventually drawn back full time to the San Francisco area, and to the town of Calistoga where George bought 50 acres of farmland and grew fruits and vegetables as well as prized Zinfandel grapes that fueled the start of a new career as a vintner.

During this next extraordinary phase of his life, George and Ira developed friendships with people all over the world and kept a full social calendar of activities- with George's regal style and confidence and Ira's dramatic flair and adventurous spirit, they moved among powerbrokers, celebrities, and ordinary folks—---making lasting lifetime friends—as helpmates and soulmates, they drew people to their home in the Calistoga area, and in 2018 George married his beloved partner of 50 years.

Hellyer, with the help and encouragement of Ira, also spent his time further refining his skills as an artist - turning to acrylic and oil painting of local scenes and still lifes, a collection of which were seen in several art exhibitions and published in an art catalogue.

In 1987, he also co-authored, with Ira Yeager senior, "Recollections of a Sportsman, A Life of Hunting and Fishing in the Pacific Northwest."

In between painting sessions, Hellyer found joy maintaining the farm, fixing up the house, and driving his tractor around the grounds while still finding time to travel visiting friends in Acapulco, Europe -Italian castles—Santa Fe and beyond!

Hellyer was well-loved, much admired, and an inspiration to all who know him.

A celebration of life and exhibit of his paintings is planned for George's 100th birthday, March 22, 2022 at Yager Galerie, Calistoga, CA.
Published by San Francisco Chronicle from Jun. 21 to Jun. 27, 2021.
To plant trees in memory, please visit the Sympathy Store.
MEMORIAL EVENTS
Mar
22
Celebration of Life
Yager Galerie
Calistoga, CA
MAKE A DONATION
MEMORIES & CONDOLENCES
5 Entries
When I was introduced to George in the 1980s, I found him then and for the rest of his life to be the most genteel and empathic Man, a real and diversely talented Edwardian reincarnation in Northern California. Always kind and a good listener, people were consistently and genuinely glad to see him. A rare find in today´s world, George became a treasure as are our memories of him.
Joseph Goldyne
Friend
June 30, 2021
We're so sorry to hear of the loss of an amazing man. Ira, you and all of your loved ones are in our thoughts and prayers. Please let us know if you need anything.
HEWN
Work
June 30, 2021
Dear Ira and Family, I´m so sorry for the loss of this wonderful man ( light ). Much love, Katie
Katie Pence
June 29, 2021
Few could match George´s extraordinary intuitive intelligence, integrity and empathy. He got it! What a life well lived . I will miss him greatly. All love to Ira. Thinking of you. Xxx Jan
Jan Niemi
Friend
June 27, 2021
George was an extraordinary gentleman and fine artist. I especially enjoyed reading his book about his experience in the Greek village and talking about it with him many years ago. My condolences to Ira and his extended family.
Katherine Caron
Friend
June 27, 2021
Showing 1 - 5 of 5 results