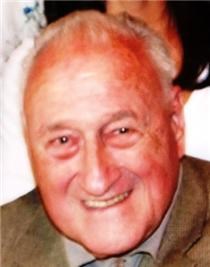 Gordon Cyrus Cuneo Passed away peacefully at home in San Rafael Thursday, January 14, 2010. Born January 15, 1924 in Pearl River, New York Gordon moved with his family to San Francisco in 1930. He has lived the last 50 years in Marin County. In his youth he attended Garfield, Francisco and Galileo High Schools and played basketball with the Salesian Boys Club in North Beach. After serving with the US Army Air Corps as a navigator of B-24's during WWII, he returned to UC Berkeley as a sophomore. While at Cal he was a star basketball player for three years during which time they won a State Championship. Later, while working, he played basketball for the Stewart Chevrolet Team, forerunner of a professional league which eventually led to formation of the current NBA. In 1949, after graduating from UC Berkeley, he married his college sweetheart Ann Curtis, a Gold Medalist in swimming at the 1948 Olympics. Together they acquired land and built the Ann Curtis School of Swimming in San Rafael, now in its 51st year of successful operation. During the years of swim club operation Gordon worked as a Sales Executive with GMAC and thereafter as the General Manager of European Motors, now Mercedes Benz of San Francisco In retirement Gordon enjoyed playing golf and tennis, traveling, and spending time at his Lake Tahoe vacation home. He will be remembered as a humble man of honor and integrity and an incredible family man. Gordon was preceded in death by his son, William, and is survived by his wife Ann Curtis Cuneo, his children Carol "Carrie" Cuneo of San Rafael, Susan Cuneo Starr of Lafayette, California, David Cuneo of Corte Madera and Brian Cuneo of Truckee, his sister Doris Maslach of El Cerrito, nine grandchildren and three great-grandchildren. A memorial celebration for friends and family will be held on Saturday, January 23, at 11:00 AM at the Marin Country Club, 500 Country Club Drive, Novato, California.
Published by San Francisco Chronicle on Jan. 19, 2010.
To plant trees in memory, please visit the Sympathy Store.
MEMORIAL EVENTS
To offer your sympathy during this difficult time, you can now have memorial trees planted in a National Forest in memory of your loved one.
MAKE A DONATION
MEMORIES & CONDOLENCES
13 Entries
To the Cuneo Family,
It was an honor to have known Gordon and have been his mailman for over forty years. I will miss his wonderful smile. He was a true gentleman.
Tom O'Doul
January 28, 2010
I am sorry for your lost, Mike Sessi
January 24, 2010
Ann, Carrie, Susie,Dave and Brian,
We send our heart felt sympathies to you all. We love you
all and always think of Gordon and Ann as our second
parents.
Love Always, Bill & Barb Verran
January 22, 2010
The Asiano family would like to offer our deepest and most heartfelt sympathy to our old friends the Cuneo's upon hearing of the passing of Mr. Cuneo. Our families go so far back with one another that growing up and living on Golden Hinde Blvd. is almost synonomous with the Cuneo family.
The classic memories growing up with Dave, Mrs. Cuneo, Carrie, Bill, Sue and Brian are so special to me. And then there are the Mr. Cuneo remembrances. His athleticism on the school yard basketball courts and local golf courses were only out weighed by his presence as an occasionl doubles partner on the tennis court. Usually he and I would team up against Dave and the other buddies..more often than not we would come away the winners... and the bragging rights would follow.
He tall stature,strong presence and quick wit will be sorely missed. I also know in speaking with Dave over the years how proud he was of his old man. I'll miss you Mr. Cuneo. Rest In Peace. You were one of a kind.

Tom Asiano and the Asiano family.
Tom Asiano
January 20, 2010
To Gordon's Family: I have known Gordon since I was a child having lived next door to one another in North Beach. Gordon was not only a wonderful, wholesome child, but he turned into be a lovely wonderful respecful man who was truly loved by all. I was so sorry to hear of his passing. Ann-my deepest sypmathy. My daughter Tina took swimming lessons at your school around 40 years ago. My prayers are with all of you. I will forever keep Gordon in my prayers. Very truly yours, Angela Bellanti Canepa
Angela Canepa
January 20, 2010
Dear Cuneo family:

We send our condolences to you all. We are so sorry to hear of Gordon's passing.
Although we never had the pleasure of meeting Gordon (or Ann) in-person, we heard such fond stories about him from our dear mother (Legnitto family). When we were young, we were introduced to the beloved and beautiful murals at Coit Tower which were painted by Gordon's father Rinaldo Cuneo. They remained a family pride throughout the years.
We send our thoughts and prayers,
with deepest sympathies,
Monica Monaghan-Milstein & family
Monica Monaghan-Milstein
January 19, 2010
Ann, Carrie, Susie, Dave and Brian - I am so sorry to hear of Mr. Cuneo's passing. My whole family sends their thoughts and prayers. Katie Lee and Family.
January 19, 2010
Ann - Val and I are sorry we will be out of town when the memorial for Gordon takes place. He was such a gentleman. He sold me a 300D that I drove forever! My heart goes out to you and your family on the passing of a great man.
Dick Matthews
January 19, 2010
Ann and all the Cuneo Family, We are so sorry for your loss. Gordon will be forever remembered. Our thoughts and prayers are with you all.
Betty, Miles and Michael Roan and family
January 19, 2010
Dear Ann, Marie and I extend our deepest condolence for the loss of Gordon. He was a wonderful man, full of love for his family and a trully wonderful member of Il Cenacolo. He will be missed.
Ron and Marie Derenzi
January 19, 2010
Ann and the Cuneo family: Our sincerest and deepest sympathy. Gordon was a treasured part of the European Motors family and we have the fondest memories of our time with him there. We wish you peace and comfort knowing that Gordon was loved by so many. Yoko Furukawa, San Francisco, Olga Chekene, San Francisco and Gayle Grace, Oakland.
Gayle Grace
January 19, 2010
Dear Ann, Carrie, Susie, Dave, and Brian,
You are all in our hearts. We have wonderful memories of Gordon's sense of humor, his love and deep respect for Ann, and his tireless work for ACSC.
Much love,
Julianne, Lois, and Chris
Julianne Henry
January 18, 2010
Dear Cuneo Family,

You are all in my thoughts and prayers. What a wonderful man Gordon was...I have so many fond memories of him from working at ACSC over many years.