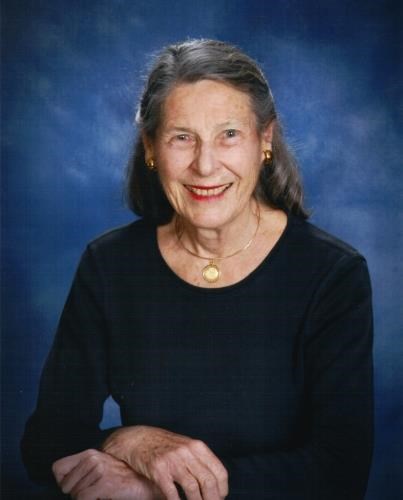 BORN
1935
DIED
2021
FUNERAL HOME
Crosby-N. Gray & Co. - FD-96
2 Park Road
Burlingame, CA
Grace Buzzell Kittredge
May 24, 1935 - Aug. 2, 2021
Grace Buzzell Kittredge passed away peacefully on August 2, 2021 at the age of 86 surrounded by her family. She was the loving mother of Suzanne (Kevin) and Perry (Pravina); the devoted "Gran" to her five grandchildren, Nick, Will, Prithika, Pearson, and Paxton; and the beloved wife of Michael, who passed away in 1978. Also preceding her in death were her parents, Matthew and Grace Buzzell, and her brother, Matt Buzzell, Jr.

Grace spent the first 40 years of her life in San Francisco where she was born, attended school, and enjoyed life in her favorite city. She graduated from George Washington High School, later attending every class reunion, and then earned her bachelor's degree from San Francisco State University. She received her teaching credential and taught kindergarten in the San Francisco Unified School District.

Grace met her husband, Mike, when they were teaching together. After starting their family, Grace moved to the Peninsula in 1975. She lived in the communities of Hillsborough, Burlingame, and San Mateo. During this time, Grace dedicated herself to making a home and raising her children. Grace's membership and participation in the First Presbyterian Church of Burlingame was a meaningful part of her life during this period. As a young widow, she valued the New Beginnings group for the widowed and divorced and the youth programs for her children. In later years, she was a faithful member of Women Together.

Education was an integral theme in Grace's life. In addition to teaching kindergarten for the SFUSD, she spent a year in Germany in the 1960s teaching the children of U.S. military personnel. After she became a young widow in 1978, she took over the administration of Kittredge School, the private elementary school started by her husband and his mother.

Grace had a love of travel, sparked by a trip to Europe when she was in her twenties. She traveled many times with her children to Hawaii, which held a special place in her heart. Other memorable trips included China in the 1980s, Africa, Alaska, Israel, Australia, New Zealand, and the Galapagos Islands.

Above all, Grace loved and enjoyed her family. It was important to her that her children and grandchildren receive excellent educations, be able to create nurturing homes for their families, and live good lives. Throughout her life, she generously encouraged and supported them in these endeavors.

Family and friends are invited to a service for Grace on Wednesday, August 11th at 10 am at Crosby-N. Gray & Co. Funeral Home, 2 Park Road, Burlingame, CA 94010, which will be followed by interment at Cypress Lawn and a reception hosted by Grace's family at the Olympic Club Lakeside Clubhouse, 599 Skyline Blvd., San Francisco, CA 94132 (masks required; no denim). In lieu of flowers, the family requests donations to the Alzheimer's Association at www.alz.org.

Published by San Francisco Chronicle from Aug. 9 to Aug. 10, 2021.
To plant trees in memory, please visit the Sympathy Store.
MEMORIAL EVENTS
Aug
11
Service
10:00a.m.
Crosby-N. Gray & Co. - FD-96
2 Park Road, Burlingame, CA
Aug
11
Interment
11:30a.m.
Cypress Lawn Memorial Park
1370 El Camino Real, Colma, CA
Funeral services provided by:
Crosby-N. Gray & Co. - FD-96
MAKE A DONATION
Please consider a donation as requested by the family.
MEMORIES & CONDOLENCES
Sponsored by Crosby-N. Gray & Co. - FD-96.
2 Entries
Thanks for the lovely write-up about your dear mom. She was a very special part of First Presbyterian over the years! I'm sorry I was out of town and couldn't officiate at her memorial service. Blessings to you, Perry and Suzanne, and your families.
Anne Swanson
Friend
August 18, 2021
Perry and Suzanne, your mom was hilarious, smart and gorgeous. She always showed concern and genuine interest for me in my teaching journey. She loved that I, as she met your dad, meant my husband teaching. Perry, it's been decades but I hope you are still in education despite these challenging times. I am so sorry for your family's loss.
Kim Darling Loisel
Friend
August 10, 2021
Showing 1 - 2 of 2 results