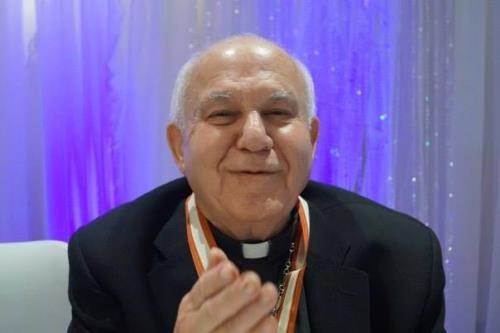 BORN
1931
DIED
2021
FUNERAL HOME
Duggan's Serra Mortuary
500 Westlake Avenue
Daly City, CA
Gregory Ofiesh
The Very Reverend Father
The Very Reverend Father Gregory Ofiesh, born Raymond Ofiesh, passed away surrounded by his family at his Millbrae home on August 11, 2021, two days before his 90th birthday. Fr. Gregory was born on August 13th, 1931 in New Kensington, PA to the late Khouyria Emily Ofiesh and the Very Reverend Father Nicholas Ofiesh, of St. George Antiochian Orthodox Church. The 10thof 13 children, upon his graduation from New Kensington High School, he earned a Certificate in Business and Accounting from New Kensington Commercial College. He then attended Duquesne University where he received a BA in Philosophy with a minor in Latin and Greek. He then studied Theology at Holy Cross Theological Seminary in Brookline, MA and ultimately received his BA in Theology from St. Vladimir's Orthodox Theological Seminary in New York, NY. In 1958 he received a MA degree in Religious Education with a minor in Pastoral Psychology. At the University of Pittsburgh he studied Psychology and Child Development, and held teaching credentials in History and Political Science.

Father Gregory met his beloved wife Mary Jane (Saleet) from Natrona Heights, PA at his father's church in New Kensington, PA. They were married in February, 1959 and he was ordained an Orthodox Christian Priest in the Antiochian Archdiocese of North America in March, 1959. From 1959-1964 he was pastor of St. Elijah Orthodox Church in Oklahoma City, OK and from 1964 until 2000 he was pastor of St. Nicholas Orthodox Church in San Francisco, CA where he remained Pastor Emeritus. Father Gregory was active in the Bay Area at many levels including prison ministry, immigration, criminal justice and the social and educational needs of those less fortunate than most. Over the years he worked with key figures on issues related to Arab American Immigration and Anti-Discrimination, the Middle East conflict and the rights of all children and youth, including working with Pope Paul VI, Presidents Eisenhower, Johnson and Bush and local Mayors, George Christopher, George Moscone, Jack Shelley, Joe Allioto and Art Agnos. A tireless advocate of children in the juvenile justice system, he founded six residential group homes for children who were wards of the court, St. Nicholas Youth Homes.Upon retirement at St. Nicholas he was honored to assist on the alter with his friend and brother in Christ, Fr. Stephen Kyriacou at Annunciation Greek Orthodox Cathedral in San Francisco, whose parishioners he loved and enjoyed getting to know.

Personally, Father Gregory loved to read history, politics and philosophy and enjoyed swimming as often as possible. He was often seen at his children's businesses in San Mateo (Nick's Deli) and South San Francisco (Raymond's Sourdough Bakery Corporation) laughing and socializing with the local community. He loved San Francisco with all his heart and was proud of his community. His last five years and passing was graced with the love and care of Pela Manukainiu, Soko Tau, FatanBarranti and Dr. Paul Fitzgerald of UCSF for which the family will be eternally grateful. Fr. Gregory is survived by his wife Khouyria Mary Jane Ofiesh of Millbrae, CA, his children, Nicholas Ofiesh, Nicole Ofiesh, Raymond Ofiesh and Michael Ofiesh, his granddaughter Mary Jane Peters, and his sisters Madeline Kayafas of Clearwater, FL and Minerva Matthews of New Kensington, PA. He is preceded in death by his parents, The Very Reverend Father Nicholas Ofiesh and Khouryia Emily Ofiesh and his siblings, Gladys Beter, Dr. Gabriel Ofiesh, George Ofiesh, Albert Ofiesh, Nadia Ward, Dr. Catherine Orner, Virginia Ofiesh, Elayne Ofiesh, Neal Ofiesh and Edward Ofiesh.

Published by San Francisco Chronicle from Aug. 13 to Aug. 15, 2021.
To plant trees in memory, please visit the Sympathy Store.
MEMORIAL EVENTS
Aug
18
Vigil
6:00p.m.
PA
Aug
19
Liturgy
9:00a.m.
St. George Orthodox Church
New Kensington, PA
Aug
19
Funeral service
11:30a.m.
St. George Orthodox Church
New Kensington, PA
Funeral services provided by:
Duggan's Serra Mortuary
MAKE A DONATION
MEMORIES & CONDOLENCES
Sponsored by Duggan's Serra Mortuary.
5 Entries
May your memory be eternal
Margaret burgess
August 19, 2021
We will always remember our dearest Fr. Gregory. He left so many beautiful memories. Our heartfelt love forever. God rest his soul.
Rose Habib and Family
August 17, 2021
Your kind words and prayers in a time of need will always be remembered. Rest In Peace, Father
Dennis McLaughlin
August 17, 2021
I have known Fr. Gregory since his student days at St. Vladimir Seminary. Little did I know that a few years later we would become related through his marriage to Mary Jane Saleet and my marriage to her first cousin Hannah Mitry. Through the many years that I have known him, I have found him to be kind, have a deep love for people, and have dedication to helping others. It was a unique experience to have known him.
Bob Homsey
August 15, 2021
Father may you rest in peace was an honor to have known you
Laura Lewis
August 13, 2021
Showing 1 - 5 of 5 results