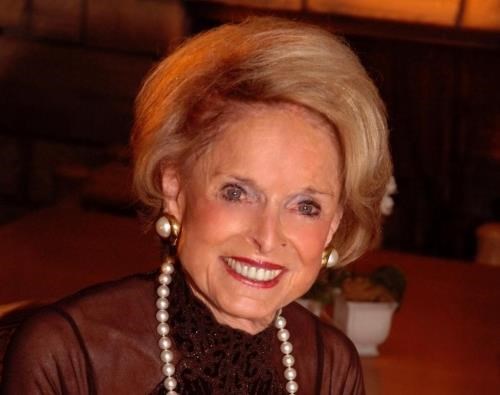 The light of San Francisco dimmed a bit on September 9th when Harriet Meyer Quarré passed away peacefully at her home at the age of 89. The youngest child of Wilson and Mabel (Mimi) Meyer, Harriet is predeceased by her brothers, George Wilson Meyer, who died serving his country in 1945, and Jeffery Wilson Meyer, who died in 2006 after a life devoted to music, the natural sciences and managing the family firm, Wilson George Meyer & Co., and sister-in-law, Janet Busse Meyer (deceased 2016). A sixth generation Californian and San Francisco native, Harriet inherited a love for the city, an enthusiasm for philanthropy, and a love of life and friends.

She attended San Francisco's Katherine Delmar Burke School, where she collected lifelong friends, and Scripps College, where she studied with famed artist Millard Sheets, deepening an interest in the arts she acquired from her parents. In 1949, Harriet married another San Francisco native, Charles Mohun Quarré (deceased 2004) and moved to Bakersfield, CA to pursue his career in the cattle business. There she raised four children (Catherine, Wilson, Simone and Marianne) and lived a life filled with volunteerism and adventure. She participated in founding Bakersfield's Junior League and Melrose School and led the children of Stockdale in horseback adventures, river floating and skiing trips to Yosemite.

Returning to San Francisco in 1974, she took up her father's passionate support of the San Francisco Opera, serving on the Opera Board for over three decades, chairing the Spring Opera program, founding the Medallion Society, and bringing an enthusiasm and charm that made her, according to the Nob Hill Gazette, "probably the only person able to convince Placido Domingo to ride a horse in a parade." She brought similar enthusiasm and lifelong devotion to the World Affairs Council, International Host Committee, The Hoover Institution, and The Society of California Pioneers. She was also a longtime member of the California Tennis Club, Francisca Club, and San Francisco Junior League.

A cowgirl at heart, Harriet loved horses and even more, her "horse people," joining them in globe-spanning rides with the Cabalgata Riders, trail rides in Woodside with the Shack Riders, and on ranches throughout California with the Los Viajeros Riding Club and Las Estrellas Riders. She won her first equestrian medals as a child at the Menlo Circus Club, where she continued to ride throughout her life. She won her last equestrian medals driving carriage horses last year at age 88.

She was as comfortable and happy in the company of working cowboys and Argentine gauchos as the stars of the opera or San Francisco civic leaders. Harriet's style, intelligence, humor, and graciousness to people of all lifestyles was her hallmark. Harriet's inclusive personality brought many fascinating people together, enriching all who knew her.

Services scheduled on Thursday, October 20, 2016 at Grace Cathedral at 2PM. In lieu of flowers, gifts in Harriet Meyer Quarré's memory should be made to:

Published by San Francisco Chronicle from Sep. 15 to Sep. 19, 2016.
To plant trees in memory, please visit the Sympathy Store.
MEMORIAL EVENTS
Oct
20
Memorial Gathering
3:30p.m. - 5:30p.m.
The Francisca Club
595 Sutter Street,, San Francisco, CA
Oct
20
Celebration of Life
2:00p.m.
Grace Cathedral
1100 California Street,, San Francisco, CA
MAKE A DONATION
MEMORIES & CONDOLENCES
10 Entries
Harriet always had a positive outlook no matter what was happening to her physically. She was a joy and a delight to know. She always made me laugh with her no nonsense view of life. A style icon and a truly classy woman. I miss you Harriet. Thank you for the pleasure of knowing you.
Deborah Pannier
November 10, 2016
Gary and I knew Harriet for only a short time as an equestrian and wonderful hostess at her home. She would come down on Friday evenings and Sunday mornings to ride in our team penning events at the Mounted Patrol, bringing her beloved Bogie from the Circus Club. Always dressed to the 9s in wonderful outfits! She would bring the best "goodies" from maybe a previous dinner party, white wine, deviled eggs, tea sandwiches, to share with the other riders. And sometimes she'd ask Bill Jabs to ride Bogie to get him settled before her first ride.
One Friday evening she told us she wouldn't be able to come on Sunday because she was having a party that Saturday night. Gary, as was his humorous way (he thought!), said "Well, how come we're not invited?" Laughter... so about 3 weeks later we're invited to Harriet's home for dinner! Noel Moody, Frank Foti, a wonderful man who raised and showed Morgans were there, John, Harriet's friend, and a few others enjoyed a delightful evening with Harriet. Something we'll cherish in our memories.

The lights truly have dimmed for everyone Harriet touched. May she rest in peace in God's green acres.
Gary and Ann Kirby
October 20, 2016
Cannot imagine San Francisco cultural and social lives without Hariet.
October 17, 2016
I'm so sorry for your loss. May you find comfort in prayer, knowing that God loves and cares for you. (1 Pet. 5:7).

Sincerely,
Sue
sue massey
October 15, 2016
Harriet had 3 qualities that rarely are in combination: High style, a love of music and culture AND a down to earth attitude (Maybe it was her love of horses that bred that???). So sad to see her depart, but, as anyone who knew her would feel, knowing her was "A great ride", like her love of the various saddle trips all around CA. May she RIP.
John Johnston
October 5, 2016
What a smooth performance: in life as in death you ebbed and flowed gracefully. You bewitched us all with your grace and good humor, glittering and dazzling for good measure: our shining star. We all said we wanted to be like Harriet, but who is our beacon now ? There is a big void where you used to be and no-one to step into those elegant boots.

Dear Harriet, perhaps we will one day meet up on the Great Divide, who knows ?

Ellie Ferrari and all your friends who loved you.
Ellie Ferrari
September 28, 2016
Love leaves a memory no one can steal; earth has no sorrow that Heaven cannot heal. The Quarre Family have my deepest sympathy.
Vicki Hicks
September 22, 2016
Keep your heels down & your eyes up, Cowgirl! Fond memories, Thank you.
Nan Kreeger
September 17, 2016
A kind a charming woman, so passionately devoted to her horses. Always such a hoot to speak with on the phone. Will remember you fondly, Harriet. RIP.
Robert Puccinelli
September 17, 2016
My deepest sympathy for your loss. May the hearer of prayer grant comfort and peace at this time of grief.
September 16, 2016
Showing 1 - 10 of 10 results