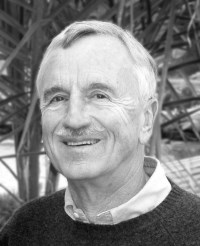 Henry R. Hilgard died unexpectedly from cardiac arrest at Dominican Hospital in Santa Cruz, California. He had lived a rich and active life for 76 years. He was among the first group of biology department faculty at the University of California, Santa Cruz, arriving in Santa Cruz with his wife, Galen and their three young daughters in 1967.

A gifted teacher, Henry received "The Distinguished Teaching Award" at UCSC in the 1990's. He loved synthesizing complex information and presenting his knowledge in a unique and clear way. He deeply enjoyed sharing ideas with colleagues, friends, and family whether the topic related to history, science, medicine, numismatics, or life. Known for his upbeat and engaging style, he could picture and analyze serious subjects, and make people laugh. As Henry's friend, Sheridan Downey wrote, "for me his counsel, insight and common sense were the gold standard, as they were for his wife, daughters and grandchildren."

Fascinated by the study of immunology, Henry carried out research in this field for many years, and kept abreast of new immunological findings until the day he died. Henry received an "Established Investigatorship of the American Heart Association," among other grants. His immunology and human biology courses were among the most popular classes in biology at UCSC, and he played a key role in the introduction of several "non-major" biology courses at the university, such as "Cardiovascular Disease and Health," and "AIDS: Perspectives on an Epidemic." Henry enjoyed serving on the Premedical Advisory Committee at UCSC, and he had great admiration for his students, many of whom went on to become physicians, biologists and science writers. He served as chair of Biology at UCSC from 1989 - 1992, becoming emeritus in 1994.

Henry co-authored the book, "The Biology of People" with Sam Singer (published by W.H. Freeman and Company, San Francisco, in 1978.)

Born and raised in Palo Alto, California, Henry was the son of Josephine Rohrs Hilgard and Ernest R. Hilgard, professors at Stanford University. Henry received his undergraduate degree at Harvard University, his M.D. at Stanford University, and having developed a strong interest in research and teaching, he subsequently earned a PhD in the field of microbiology at University of Minnesota. An exciting predoctoral stint was pivotal in Henry's science career when he worked with Nobel Prize winner Sir Frank Macfarlane Burnet in Melbourne, Australia. Galen and their baby daughter, Julia, accompanied him; and the whole family stayed in many wonderful cities over the arc of Henry's career.

Between 1968 and 1970, Henry served as Lieutenant Commander in the US Navy, working as a scientist in Bethesda, Maryland, and in San Francisco, California.

Henry's passions included the natural sciences, numismatics, walking with friends, and taking adventurous trips with Galen. He also enjoyed working outdoors, sports, reading, music, dance and theater. He was a fan of the 49ers and SF Giants. His great joy was talking and visiting with his daughters and their husbands, and playing with his six grandchildren.

Henry is survived by his wife of 53 years, Galen Howard Hilgard, by his daughters and their husbands, Julia Hilgard Ritter and John Ritter of Ligonier, PA, Galen Rohrs (Hilgard) Roll and Gunnar Roll of Santa Cruz, and Adaline Josephine Hilgard and Kyle Noone, of San Francisco, and by his grandchildren, Madaline and Clayton Ritter, Turner and Adaline Roll, and Josephine and Kellen Noone. He is also survived by his sister, Elizabeth Jecker and her husband, Jery Jecker, of San Luis Obispo, and their two grown children; and by many beloved cousins and friends.

A celebration of Henry's life will be held Saturday July 6th at 2:00 pm, at the First Congregational Church at 900 High Street, Santa Cruz, California.

A contribution in Henry's memory may be made to the American Heart Association, to The Nature Conservancy, to Shakespeare Santa Cruz, or to a charitable organization of one's choice.
Published by San Francisco Chronicle from May 17 to May 19, 2013.
To plant trees in memory, please visit the Sympathy Store.
MEMORIAL EVENTS
To offer your sympathy during this difficult time, you can now have memorial trees planted in a National Forest in memory of your loved one.
MAKE A DONATION
MEMORIES & CONDOLENCES
Sponsored by anonymous.
16 Entries
I just read today of Henry's passing, more than a year after he passed away. A few years ago, I'd contacted Henry just to say hi - he'd been my college advisor and biology mentor when I was an undergraduate at UC Santa Cruz from '72 - '76. I went on to earn a Ph.D. and have spent a lifetime as a scientist - largely because of his kind guidance. He was a most wonderful and generous, and happy man. What a terrific person he was. Whenever I would stand before a crowd to deliver a lecture or talk, I would always, throughout my life, remember how Henry would have delivered a lecture - he was truly my inspiration. Thank you Henry - and Galen, his wonderful wife, for your kind guidance to me when I was an undergrad. Loved you both!

Richard Mitchell
Richard Mitchell
November 9, 2014
I just heard the news of Henry's passing and wanted to add my remembrances of him. He is largely responsible for my becoming a physician and his support, and example of good humor and kindness has stayed with me all these years. I consider myself very fortunate to have known him and want to express my tremendous thanks to him and his family who were all so important to me many years ago. All my thoughts to Galen, Julia, Galen and Addie. I can't say enough how much of a difference you all made in my life. Henry defined the paradigm for a father, teacher, and friend. I will miss him greatly.
Jeff Swisher
October 28, 2013
A kind always encouraging and helpful person. "thats curious" would be his response to a rude or wrongheaded encounter. He kept his opinions private until asked, when shared his thoughts were well thought out and carefully expressed. Just a positive person and a pleasure to be around.
chris mccawley
June 4, 2013
Much love to Galen and to all the family he loved and appreciated so much. He had such joy.
Eleanor Kent
May 28, 2013
Always a gentleman. He will be missed by all the numismatists that had the privilege to have made his acquaintance.
Julian Leidman
May 27, 2013
I will miss Henry and the interesting coins he showed me at coin shows. My condolences to the family.
Eugene Bruder
May 26, 2013
One of my favorite colleagues who was always full of like. A great loss

Frank Talamantes
May 23, 2013
Heidi McGough
May 23, 2013
My condolences to the family. Henry was central to what made UC Santa Cruz so unique in the mid 1970's and he helped many students launch medical careers and careers of service.

He will be greatly missed.
Ciel Benedetto
May 23, 2013
Dear ones, Thank you for such a lovely obituary. I love you so. Alice Stephens
Alice Stephens
May 21, 2013
Joyce Anderson
May 20, 2013
I worked for Natural Sciences at UCSC for over 30 years, and I remember Henry with great fondness. He always had a smile and was easy to talk with. He was one of my favorite people in the Biology Department. I am so sorry to hear of his passing, much too soon, and my deepest condolences are extended to his wife and family.
Dorothy Hollinger
May 19, 2013
Hey Henry, You left before the game was over. Remember the laffs and good times we had at Stanford ?
You are one of the people I remember the most during during med school and I wish you the best.
Next time don't quit so early.
Your old friend, Bill Anspach
William Anspach
May 19, 2013
What sad news. My condolences to Henry's entire family. I was looking forward to seeing him at our 55th Harvard reunion next week. I have such fond memories of our years living in Dunster House. A very good man who did good things has left us far too early.
Duane Wadsworth
May 19, 2013
Henry was one of the most warm and caring human beings I have ever met. I am a better man for having known him and really learning how a man can be a combination of both strong and gentile in one form. My friends and I were dearly miss his counsel and knowledge. My heart ad best wishes to Galen and the entire Hilgard clan. His life truly is one worth celebrating.
Charles Link
May 18, 2013
Dear Galen and Henry's Family,

I'm writing to express my deep condolences about Henry's passing. Henry was my colleague at Kresge College from 1973-1989. He was a deeply intelligent, straightforward, fair-minded, and gentle person. He was one of my favorite colleagues at UCSC throughout my 37 years of teaching there. A light in the universe has definitely gone out with Henry's passing.