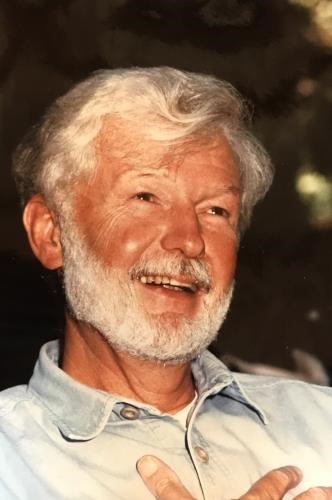 John B. "Ian" Mackinlay Jr. passed away from complications of pneumonia on December 22, 2017, at Lake Tahoe, surrounded by loving family. Ian was born in San Francisco in 1926 to Jack and Ruth Mackinlay. Ian served in the Navy on the Battleship Iowa (BB61) from 1944 to 1946 and studied Architecture at the University of California at Berkeley. In 1951, he married Katherine "Cricket" Strong in Paris, France. Their first 3 children were born in Nuremberg, Germany, where he was Chief Engineer at the European Exchange "PX" System from 1951 to 1957. Ian returned to California in 1957 where he lectured in Architecture at Berkeley from 1957 to 1960. Two more children were born in Berkeley. In 1959 he founded Ian Mackinlay and Associates in Orinda which became Mackinlay Winnacker McNeil (MWM) with offices in Oakland, Hawaii, Guam and Saudi Arabia. His distinguished career in architecture includes becoming a Fellow of the American Institute of Architects (FAIA) in 1975 and receiving over 50 awards for design. He was the Honorary Council for the Republic of Nauru for 5 years. In 1980 Ian married Carol Felich, and in 1990 he left MWM to found Ian Mackinlay Architecture (IMA) in San Francisco, which specialized in Forensic Architecture and Snow & Cold design and investigation. He testified or consulted in more than 450 forensic cases. For many decades Ian was an active member of the Bohemian Club. He loved tennis, hiking, fishing and skiing, and after selling IMA in 2007 he retired to Lake Tahoe, CA. He is survived by his wife Carol, his children Jock (Polle), Katherine Craig (Ted), Bruce (Cameran), Clif (Carolyn) and Robert (Mimi), 7 grandchildren and 1 great granddaughter as well as his step-children Sheldon Felich (Tamara), Greg Felich (Dee Dee) and Dana Friedland (David) and step-grandchildren.
A Celebration of Life will be held on Sunday March 18th 2018 at the Alumni House, Berkeley, CA from 2-5 pm.