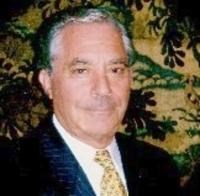 Ivor "Scotty" Morris was a extraordinary, caring man who genuinely touched the lives of many. He always started each morning with a neighborhood walk accompanied by his favorite companion, his little dog Brodie. On his walk, it was his greatest delight to meet and greet his many friends, frequently adding a new friend along the way. Scotty always made time for his friends whether it be for a chat, a word of encouragement, advice or help. Nothing made him happier than to be of help to a friend.

Ivor "Scotty" met the love of his life, Frances in San Francisco. They enjoyed a happy and bliss filled marriage for over 39 years.

Ivor was born in Inverness, Scotland. He was educated at the Inverness Royal Academy and the Rosenberg College in St. Gallen, Switzerland, where he majored in languages. He immigrated to the United States in 1952. He served his new country in the National Guard and then proudly became a US citizen. Yet, a part of his heart always remained in the Highlands.

As an athlete his skills on the soccer field were legendary. His biggest rival was his brother Raymond "Scotty" Morris. They continued their rivalry from childhood right up until last year. Scotty also excelled at table tennis and gin rummy. He won many championships.

Ever the handyman, he thought he could fix anything, often helping his friends and neighbors.

Scotty is survived by his loving wife and soul mate Frances, his brother, photojournalist Ray Scotty Morris of San Mateo, CA, and Kenneth Morris of London, England. His brother, David Morris and sister, Doris Morris Robinson predeceased him. He also leaves behind many loving nieces and nephews and in laws.

Friends are invited to a celebration of Ivor's life at a date to be announced.

In lieu of flowers, a donation may be sent in Ivor Morris' name to:

Published by San Francisco Chronicle from Nov. 5 to Nov. 7, 2013.
To plant trees in memory, please visit the Sympathy Store.
MEMORIAL EVENTS
To offer your sympathy during this difficult time, you can now have memorial trees planted in a National Forest in memory of your loved one.
MAKE A DONATION
MEMORIES & CONDOLENCES
7 Entries

I was heartbroken to hear about Scotty. We worked together in the awning industry for over 30 years. I considered him a great friend. We had interesting conversations. He was delight and I was blessed to know him. You are in my prayers.

Angela
Angela Tasker
November 12, 2013
Hi Frances,
I was so sad to hear of Ivor's death. What a wonderful person he was. My whole family is grieving still for him and you. My dad has taken this very hard. I send you my strength in this very difficult time.
Sophie Breall and family
November 11, 2013
Frances, I was so sorry to hear about Scotty. He was truly a wonderful man. He always brightened my day when he would come into my dental office. He always had a kind word and smile on his face when I would run into him on my lunch hour in Burlingame. Burlingame has truly lost one of their best residents. You are in my thoughts and prayers.
Donnita McDevitt
November 9, 2013
Our hearts are heavy with sadness for the loss of Scotty, He was a wonderful friend as well as neighbor. We truly hope he knew how deeply he touched all of us who knew him. He was a gift to us and his passing is a huge loss to our neighborhood and community. Our thoughts are with Frances and Scotty's family. He was loved and is missed by many.
Sheila and Ron Santero
Sheila Santero
November 8, 2013
Our deepest condolences.

Bob and Yvonne Miller
November 7, 2013
Scotty was a friend for more than 30 years who always had a good joke and infectious laugh. I miss him and will never forget his kindness to all.

Josh Turow
November 7, 2013
To Scotty's Family: We met Scotty recently on a trip to Burlingame during a walk. We felt like we had known him for years. What a wonderful man! We are deeply sorry for your lost.