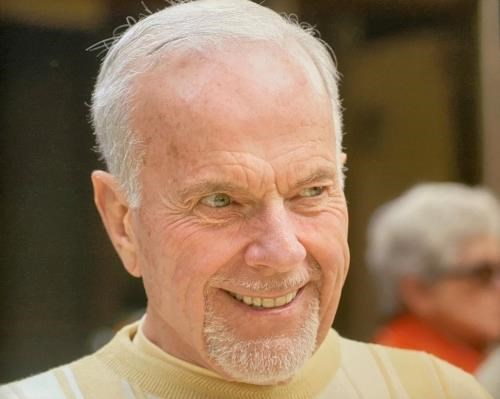 Jim was born on March 15th, 1931 in Owosso, Michigan. He was an exemplary student, graduating first in his class in high school and at the University of Michigan business school. After college, he joined Air Force ROTC, working as a photo interpreter in Japan. When he returned home from the service, his preference was to get a finance job in New York, but circumstances determined that he stay to help run the family trucking business.

In 1958 he became head of Douglas Trucking upon the death of his father. He married Jean Ann Howell on November 22nd. They soon had three children: James III who is known as Brook, Cynthia who passed away in 2002, and Kevin. After merging the company with a larger company, Jim and Jean moved the family to Grand Rapids to run Blue Arrow-Douglas. He sold this company in 1970.

Jim and Jean moved the family to San Francisco in the summer of 1977. Jim was an avid reader of history and a restless businessman. He had new success founding a cellular telephone company serving rural areas in the late 1980s called Douglas Telecommunications. Jim was a member of the Pacific-Union Club and a benefactor of the San Francisco Museum of Modern Art.

Jim is survived by his wife Jean, Brook and his wife Mikie, Kevin and his wife Michelle, and numerous grandchildren. The family will arrange a memorial at a later date.
Published by San Francisco Chronicle from Mar. 12 to Mar. 14, 2021.
To plant trees in memory, please visit the Sympathy Store.
MEMORIAL EVENTS
To offer your sympathy during this difficult time, you can now have memorial trees planted in a National Forest in memory of your loved one.
MAKE A DONATION
MEMORIES & CONDOLENCES
1 Entry
With deepest sympathy of Mr. Douglas. I met him once as a youth in Harbor Springs. I knew Kevin from school. Mr. Douglas truly had a fascination for modern art and architecture. My prayers to Mrs. Jean, Kevin, and Brook. May you cherish your memories and love of James. With sympathy, Randall Brown, Canton, Mi (formerly from Harbor Springs).
Randall Brown
Other
September 18, 2021
Showing 1 - 1 of 1 results