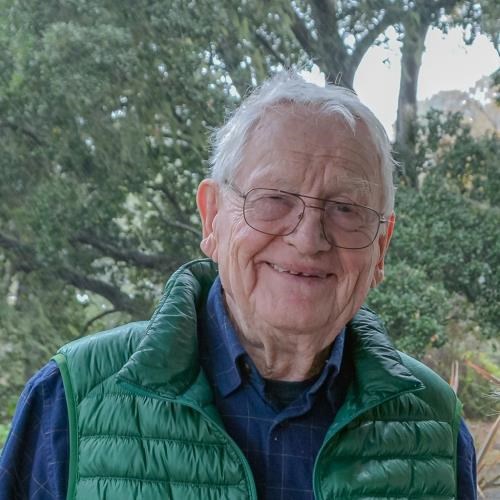 BORN
1932
DIED
2021
James Edward Monson
June 20, 1932 - January 1, 2021
On January 1st, 2021, Jim Monson passed quietly and peacefully at home in Point Reyes, surrounded by his three children and Julie, his wife of 65 years. He led a full life, of teaching, research, caring for his family and volunteering in the communities he lived in.

Born in Oakland, California in 1932, Jim's family moved frequently. His father, Col. George Monson, a Marine, was often transferred because of WWII, from coast to coast, and even to Saipan. Jim attended New Mexico Military Institute, and then Stanford University where he majored in Electrical Engineering, getting his MS degree in 1955.

In 1954, he married Julie Conzelman, also a Stanford student. His first job was with Bell Telephone Labs in Murray Hill, New Jersey. Deciding to get his PhD, he returned to Palo Alto, and was able to continue his studies and research while working part-time at Hewlett Packard. In 1961, Jim decided to teach and began his academic career at Harvey Mudd College in Claremont in Southern California. Because this small college of Engineering and Science had begun only a few years earlier, Jim and his few colleagues created an innovative curriculum in engineering, with components of the humanities. He remained at Harvey Mudd for 35 years and loved it.

Early in his career at Harvey Mudd, Jim began working with colleagues in industry on the challenges of the evolving technology in magnetic recording. He solved problems and invented solutions, working with engineers from around the world, who worked with Siemans, Mitsubishi, and other international corporations. His travels included annual international conferences (International Magnetics Conference of the Institute of Electronics and Electrical Engineers) and led to numerous connections and friendships, especially in East and West Europe, and Japan. He used his sabbaticals, every 7 years, to teach or do research in Dublin, Montenegro (twice), Japan (twice) and Paris, learning languages along the way.

In 1968, the family discovered Point Reyes, and returned to an A-frame at the top of Vision Road every summer for 20 years. When he and Julie decided to retire, this was where they wanted to live. It was an auspicious choice for both, as they became involved in the community, made many friends, and explored this special corner of Northern California, both the natural beauty of the coastal area and the cultural treasures of San Francisco. An avid birder, Jim has been watching birds for decades and always developed special friendships with others, often retired friends, especially throughout West Marin.

Jim served on the board of Coastal Health Alliance for six years, 2 terms as president; then on the board of West Marin Senior Services, also for six years; and was then appointed to serve on Marin County's Commission on Aging. Again, Jim developed many friendships with his working colleagues. He was always highly respected for his calm, clear thinking, his tolerance and thoughtful manner in handling complex issues.

Because Jim missed his associations with students, he volunteered as a tutor in math and physics at Tomales High School for ten years. His Wednesdays were spent on campus, in the classroom and with after-school tutoring.

Last March, 2020, Jim and his wife, Julie, were honored by the West Marin community for their many local volunteer contributions at the annual Dance Palace Awards Banquet, receiving recognition from state and local elected officials and community leaders.

In the 1960s, the family began regular visits to a spectacular section of the Mojave Desert near Yucca Valley that belonged to Julie's family since 1940. In 1978, they were able to acquire ownership and began a series of improvements to make it more comfortable for frequent family visits. This desert hide-a-way became a family favorite for holiday gatherings.

Jim was an exceptional father to his three children, always supportive, generous, tolerant and kind. He and his wife, Julie, had a long, loving relationship that changed and grew over their years together. He is survived by his wife, Julie, and his three children: John (Susie Helfrey), Jamie Monson and Jennifer Monson; and 4 grandchildren: James Monson, Elizabeth Monson and Eddie Monson, and Jenny Monson-Miller.

Contributions in his honor may be made to the Jim Monson Scholarship in Engineering and Science, c/o Inverness Garden Club, igcscholarships.org.

Published by San Francisco Chronicle from Jan. 20 to Jan. 23, 2021.
To plant trees in memory, please visit the Sympathy Store.
MEMORIAL EVENTS
To offer your sympathy during this difficult time, you can now have memorial trees planted in a National Forest in memory of your loved one.
MAKE A DONATION
MEMORIES & CONDOLENCES
7 Entries
Hearing this news has definitely brought sadness to my heart. I graduated from Tomales High School in 2019 and throughout my time there, I was able to create many wonderful memories of Mr. Monson. I will always remember offering him to sit with me since my desk had an extra chair. Every Wednesday he was there in my math class ready to help and always greeted me with a warm smile. There are not enough words to express the impact that Mr. Monson had. My condolences to his family.
Daysee Magana
Student
January 29, 2021
I was also in Jim's first class at HMC in 1961. He became a life long friend and mentor. As a teacher he was a hard taskmaster (will anyone ever forget he was a stickler for getting partial fractions perfect when doing Laplace Transforms?). He also helped me publish my Junior lab project although he was not the professor in charge. His support was critical to develop my self confidence. My love and condolences to Julie and his family. Michael Wilson '63
Michael Wilson
Student
January 27, 2021
I am among the group of 10 or so students that made up the first class at Harvey Mudd that Jim taught after he joined the faculty in 1961. In my senior year he agreed to let me join him in a one-on-one seminar where we worked on circuits that eventually led to a paper. One of the most influential professors in my life. The obit does not mention it, but I arranged for Jim to receive a Wine Diploma from the California Wine Advisory board, and he was the first person to inspire in me a love of wine.
Michael W Blasgen
Student
January 26, 2021
Jim Monson was a total gentleman. I had the pleasure of crossing paths with him in a number of arenas. We were fellow book chapter authors for Denis Mee and Eric Daniel. I represented IBM at Jim’s engineering clinic of Harvey Mudd, guiding some of his students in research projects. And, of course, I enjoyed participating in his Lake Arrowhead Magnetic Recording workshops. We shared Stanford ties, though many years separated He will be missed but we will have many good memories.
Tom Arnoldussen
Friend
January 26, 2021
Jim was the organizer of the Lake Arrowhead Interactive Workships on Magnetic Recording, which I was fortunate to attend for many years. He not only organized them, but made numerous technical contributions and was a great friend to all who attended. I always enjoyed seeing Jim at the workshops or at technical conferences on magnetism. I learned a lot from him, not only about magnetics, but about life as well. I am very sorry to learn he has passed away.
Mark Kryder
Acquaintance
January 26, 2021
Condolences on the loss of Professor Monson. He will be missed. Despite my being a Physics major and he an Engineering professor, he was my academic advisor, and always ready with the right knowledge to share. His mentorship and advisement was deeply felt. Every interaction was a pleasure and many owe him much.
Jason Goldberg (HMC'94)
Student
January 23, 2021
I am saddened to hear about the passing of Professor Monson. I was class of '85, and not even in engineering, but he remembered me and was kind to me when I'd visit the campus or see him at a conference. He attended our virtual class reunion and text-chatted for a bit.
Matthew Carey
Student
January 23, 2021
Showing 1 - 7 of 7 results