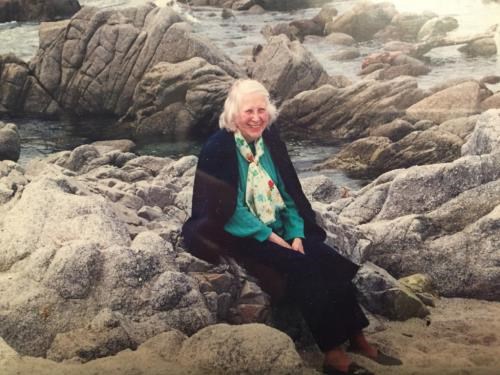 BORN
1920
DIED
2020
Jane Morrison
April 17, 1920 – July 4, 2020
Jane Morrison, with three different careers in her 100 years, the final in politics in San Francisco and California, died at her home in San Francisco on July 4th.
Mrs. Morrison, born April 17, 1920, in Hackberry Flat, near Frederick, Oklahoma, was a 1941 graduate of Oklahoma State University, in Stillwater, and worked first in 1942, as a newspaper editor in Perry, Oklahoma, a career made possible for a woman only because men went to World War II in 1942. She then worked six years as an editor for the Associated Press in Oklahoma City and Kansas City, Missouri.
She moved to the Bay Area in 1949 with her husband Jack Morrison who, as a World War II veteran, could get a master's degree with no cost at Stanford University. Jack later served 10 years as a news reporter for the San Francisco Chronicle. In the 1960s he served eight years as an elected member of the San Francisco Board of Supervisors.
In 1952, Jane began career number two in broadcasting at KNBR-NBC Radio in San Francisco, as manager of public affairs programming, editorialist and trainer of interns. For 8 years she conducted broadcasting classes part-time at San Francisco State University, the University of San Francisco, and City College of San Francisco.
Mrs. Morrison's final career was in politics as a volunteer, when she served as State Women's Chair of the California Democratic Party 1958 to 1964 and was an official delegate to the 1960 and 1964 Democratic National Conventions and campaigned in northern California with Robert and Theodore Kennedy for the 1960 election of their brother, John Kennedy, as President. She also served in leadership positions in the elections of California's U.S. Senators Dianne Feinstein, Barbara Boxer, and Kamala Harris.
Jane served as Chair of the San Francisco Democratic Party from 2002 to 2004, registering record numbers of Democratic voters. She also led various community service organizations, including as President of the City of San Francisco's Human Services Commission, and a leader of the Port of San Francisco's Waterfront Plan Advisory Board. And in the 1990s she was organizer and chair of the Woodland Avenue Feed the Hungry Project, delivering food cooked by volunteers to shelters for the homeless.
Mrs. Morrison spent much of her last years hosting fund-raising events at her home for various charities, and public officials including Presidents Bill Clinton, Barack Obama, Senators Dianne Feinstein, Barbara Boxer, and Kamala Harris, Bay Area Congressional Representatives Nancy Pelosi, Barbara Lee, Jackie Speier, Phil Burton, and Jerry McNerney, Governors Pat Brown and Jerry Brown, Mayors Willie Brown and Art Agnos, and California state legislators Tom Ammiano, John Burton, David Chiu, Mark Leno, and Phil Ting. And she campaigned hard for many members of San Francisco's Board of Supervisors, past and present.
Jane Morrison is survived by niece Camilla Schneider, and nephew Keith Schneider, both of Oregon, and niece Bobbie Louise Daggs of Arizona. Jack Morrison's surviving siblings include Charles Morrison in Washington and Gertie Lowe and Jean Baker in Missouri.
A memorial commemoration of Jane Morrison will be held when conditions are deemed safe and appropriate for gatherings.
Published by San Francisco Chronicle from Jul. 9 to Jul. 12, 2020.
To plant trees in memory, please visit the Sympathy Store.
MEMORIAL EVENTS
To offer your sympathy during this difficult time, you can now have memorial trees planted in a National Forest in memory of your loved one.
MAKE A DONATION
MEMORIES & CONDOLENCES
5 Entries
Dearest Jane will always be remembered as a tough, kind, intelligent, and inspiring woman. As a senior at Mission High School, I recieved a community award and an offer for an internship with KNBR. When I went into my interview, I lied and said I could type really fast. It took me four hours to finish typing one sheet of notes. Jane didn't humiliate me and kick me out of the station, like I expected her to do. Instead, she became my boss at KNBR, training myselt and eventually, my older sister, Mary, to learn every aspect of working in radio and how to serve our community in all the many event sponsored by the station. I learned so much in my six months there before I went to U.C. Berkeley. She was one of the most important mentors in my life and I will always treasure the years of friendship we had after my time at the radio station. Your beautiful legacy lives on in all of us who were fortunate to spend time with you. Thank you, Jane for all that you did for each intern that walked into KNBR.
Diana C. Weng
Student
April 19, 2021
I met Jane on the N-Judah train about 15 years ago, as it rounded the upper outbound corner at 9th Avenue. She was out campaigning to keep her seat on the San Francisco Democratic Party Central Committee. She said a friend had told her she didn't need to campaign, "Everybody knows who you are!" But Jane campaigned anyway, saying, "I'm worried about the people who don't know they know who I am!"

A woman of great humour whose loss is a loss to The City and to the Party, both of which she served so well and for so long.
Micheal McLoughlin
Acquaintance
August 24, 2020
Where does one start in attributes to Jane Morrison. Well, she was truly a very nice person---with resolve, dedication, knowledge, wit, leadership/ mentoring/ organizing skills and more. With decades of political events/ parties at her Woodland Avenue home, often in partnership with nearby neighbor Agar Jaicks, Jane created a hub for the Democratic Party and was a king/ queen-maker for decades of effective leaders. Her late husband Jack Morrison was also a bastion of neighborhood/ progressive causes. As a young lad, I first met the power couple when volunteering on the 1967 Jack Morrison for Mayor campaign---impressed by their genuine sociability. Both had midwestern roots and media backgrounds. Like many, I must have learned a lot from Jane, fondly remembering the SF Tomorrow meetings at her house---for over a decade. Still theres much to do, and Jane Morrison would say do it.
VIDEO: Happy 100th Birthday Jane - Centenarian Extraordinaire!
https://www.youtube.com/watch?v=a9FvX30HTqA
VIDEO: Jane Morrison's 90th birthday
https://www.youtube.com/watch?v=hVfMRAn0N7A
FOUNDSF: The House That Jack Built: A History of San Francisco Tomorrow
http://www.foundsf.org/index.php?title=The_House_That_Jack_Built:_A_History_of_San_Francisco_Tomorrow
Howard Wong
Friend
July 11, 2020
Jane allowed me to host a KNBR/KYUU Public Affairs Show, while I was working for the San José & Oakland Dioceses & San Francisco Archdiocese. When that job grant ended, Jane offered me the opportunity to do Public Affairs, train & supervise interns, make sure KNBR/KYUU was providing Equal Access; plus, I conducted numerous sales marketing surveys. BUT, Even before all this, Jane had me working on numerous political campaign fundraisers & even the National Democratic Convention in San Francisco. Our last fundraiser was for US Senator Kamala Harris! Thanks Jane Morrison, my little sister, who made it to 100 & made a huge difference for women & minorities in broadcasting & Politics!
Rosana Madrigal
Coworker
July 11, 2020
Dear Jane,
I was so very "sadden" to read about your passing!! You did so much for KNBR Radio when I worked there as an Acct. Exec. and then started their
Retail Sales Dept. You were always "dedicated" and I know that my wife, "Ginny" Yamate looked up to you as a person to guide her through her business life.
So with a "heavy heart" I send my deepest condolences to your family and friends!!
Don Yamate
Don Yamate
Coworker
July 9, 2020
Showing 1 - 5 of 5 results