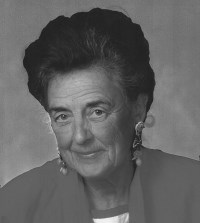 Jane passed away peacefully at the age of 91 at her home in Hillsborough, California, on August 11, 2013.

Born July 31, 1922, to Thelma and Charles Peake in Kansas City, Missouri, Jane spent her youth in Chanute, Kansas, along with her two younger brothers, Charles and Hale. After graduating a Jayhawk from the University of Kansas and a brief stint in Hollywood, she returned to Kansas to marry the love of her life, John "Jack" Starks Wilson, in 1943. Together, following Jack's Navy career, they eventually made their way to the California Bay Area and steadily grew their family with the addition of one son, John, and two daughters, Cathy and Jan.

All who knew Jane could appreciate her relentless drive to entertain family, friends and strangers alike with her Midwest charm and hospitality, quick wit and reflective optimism. She had an uncanny ability to make friends with just about everyone that crossed her path; she was always happy to lend a helping hand, receptive ear or warm embrace.

As an avid golfer, Jane spent the majority of her free time swinging irons at golf courses spanning the greater Bay Area and Pebble Beach, especially the Peninsula Golf and Country Club (PGCC) and Monterey Peninsula Country Club. She was actively involved as a member and captain of the PGCC women's golf team, as well as served as a bright fixture in numerous club shows. One of Jane's most treasured achievements on the golf course was winning the PGCC women's club championship twice. She truly delighted in socializing with her many club friends and leaves a legacy of lighthearted quips, pluck and model sportsmanship out on the back nine.

Though preceded in death by her beloved husband, Jack, Jane and he shared many happy memories building a family and engaging in countless adventures together over the course of their 46-year marriage. Ever the devoted wife, she spent the remainder of her years upholding Jack's memory and living life to the fullest in his honor.

For those who would like to celebrate Jane's life and memory, a memorial service will be held on Wednesday, August 14, at 4:00 PM at the Central Peninsula Church, 1005 Shell Boulevard, Foster City, CA 94404, (650) 349-1132. In lieu of flowers, the family asks that any contributions in her honor be made to San Mateo County Health Foundation.

Published by San Francisco Chronicle from Aug. 12 to Aug. 14, 2013.
To plant trees in memory, please visit the Sympathy Store.
MEMORIAL EVENTS
To offer your sympathy during this difficult time, you can now have memorial trees planted in a National Forest in memory of your loved one.
MAKE A DONATION
MEMORIES & CONDOLENCES
17 Entries
I truly loved and admired Jane so much. She was a true positive force in my life. When I had needed guidance, Jane was "the go to girl." I have never met anyone in my life who enjoyed life more and always always saw the good in people. There will never be anyone with a better sense of humor and a great ability to laugh at herself. I just can't even believe how lucky John, Cathy and Jan were to have Jane as their mother! Jane will now be the most popular person in heaven! Martha Ryan Hillsborough, CA
August 28, 2013
May we all live our lives with such grace....thank you for so many happy years you shared with all of us....I'll miss you my friend...love to your wonderful family....Jim & Geri Nicholas
Jim & Geri Nicholas
August 27, 2013
As a small child your house was an object of wonder, a castle, and you were the queen. I loved visiting my aunt,uncle and cousins. Aunt Jane always made me feel important, grown up, and special. She was much like my father, loved people and spread that love to everyone around her, that was her crown. She was "Crazy Jane" to my dad, and "Auntie Mame" to us. We are blessed to know and love you.
Susan Peake
August 15, 2013
Jane is an inspiration to us all. What a beautiful smile she always had for everyone. You have a wonderful family that will keep on with your traditions.
Gail Marlin
August 15, 2013
I knew Jane while a junior golfer at Peninsula G&CC in the 1970's. She was always very interested in how us juniors were doing with our games. 2 years ago I played there in a US Amateur qualifier, there she was following her grandson on the course. She remembered me, we had a terrific talk. Will always remember her wonderful example and love of life.

John Giffin
Petaluma, CA
August 14, 2013
My dear Aunt Jane.....such a fun and loving person. Many many fun memories of 4th of July and so much more! Go now and reunite with Uncle Jack...enjoy your new life!! Give mom & dad and Uncle Hale a hug for me. xoxoxo
Melissa Gallow
August 14, 2013
we feel so fortunate to have been a friend for many years...thank you, jane, for all the great moments...bless you....
charles & lisa royals
August 13, 2013
Jane was one of my special friends in Pebble Beach. She was truly "one of a kind." We will all miss her visits to
her Pebble Beach home.
Jack Davis
August 13, 2013
Jane was such a special lady and will be missed dearly. She was always such an inspiration!

Nancy Steele
Nancy Steele
August 13, 2013
Beautiful until the day she passed, I will forever miss her gracious and serene dignity.
JJ Rothgery
August 13, 2013
You inspired me and so many others with your loving way and wonderful personality. Growing up on Chelmsford Road was even better knowing
you and your family were right up the street. My love goes out to John, Cathy, Jan and extended family. With sadness and beautiful rich memories of Jane.
David Lees
August 13, 2013

Jane was my cheerleader. She inspired me in golf and in life. While out on the golf course, I find myself asking, "What would Jane do?". Her golf was creative, "Use your driver and punch it out from under the trees. If you can use your putter, do it, even of you are off the green.". Off the course, she was just as wise and spirited. She was the mother many of us never had and the friend that many of us treasured. I will miss her, but I will always hear her encouraging voice while I face challenges in my life and on the golf course. Good bye dear Jane.
Beth Williams
August 13, 2013
Oh, how I admired and loved her. She was a legend. She loved everyone she met. Always opened her home and lifestyle to all. She set the bar high through her faith, generosity, and lack of criticism of anyone or anything. Her glass was always full to the brim. A classy woman, with whom God must have said, "Well done"!
Judy O'Neal
August 13, 2013
Jane was my first golf mentor and like a second mother to me and so many others. I loved her very much. She was the most positive, fun, sweet and loving person I ever knew. Jane will brighten the heavens and the stars. karen lanterman throop
August 13, 2013
I will miss her her smile and spirit. Such a special woman.
Sally Myerson
August 12, 2013
We are thinking about your family during this sad time! Jane will be missed by all of us that knew her! She touched all of our lives with all of her love, of family, friends & life. Livi & Carl Goldstone
Olivia & Carl Goldstone
August 12, 2013
Such a lovely lady. She will be missed.
Ana Cianci
August 12, 2013
Showing 1 - 17 of 17 results