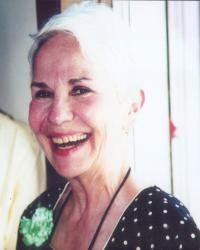 Jeanmarie (Jeannie) MaherJeanmarie (Jeannie) Maher, progressive Democratic Party activist, died in her San Francisco home on July 22, 2014. She was 72. Dear Jeannie suffered from COPD, Chronic Obstructive Pulmonary Disease, while valiantly maintaining her wonderful array of interests with many friends.
Maher was born in Coeur d'Alene, Idaho, the daughter of Richard and Celine Maher, before her family moved to Santa Clara Valley. After graduating from the University of Santa Clara in 1965, she took her first job in the Communications Department of The Asia Foundation in San Francisco. In 1968 she was asked by the National Academy of Sciences to coordinate a conference in Indonesia. She visited nine other Asian countries to learn firsthand about Asia Foundation programs.
Maher then accepted an invitation from Captain Scott Newhall and First Officer Karl Kortum to crew on board the epic last voyage of the side- wheel paddle steamboat, The Eppleton Hall, sailing from Newcastle-upon-Tyne, England, to San Francisco, where it is permanently berthed on display at Fisherman's Wharf. She served on the Board of the National Maritime Museum Association Board of Trustees with Museum co-founder David Nelson.
Maher began her political activism by working with Bill Lockyer on Jess Unruh's gubernatorial campaign against Ronal Reagan. In 1971-72, she served as Executive Director for the Northern California Democratic Party. She worked as fundraiser for McGovern for President and later as Press Secretary for Jim Stewart for Congress (against Pete McCloskey) and then became Campaign Manager for former 49er Bob St. Clair for Senate (v. John Foran). In 1973-74, she was Assistant to California Democratic Party Chair John Burton, and then opened up her own political consulting firm representing, among others, Gray Davis for State Treasurer and Ken Cory for California Controller.
Changing tack, Maher went to work for the attorneys of J. Paul Getty and Howard Hughes, representing Westinghouse, and other large corporations. She was law office manager for major firms in New York, Seattle and San Francisco, including Brobeck, Phleger et al, Graham & James and Bancroft, Avery & McAllister. Jeannie Maher then made a specific decision to move from the corporate world to the public sector and to continue nonprofit volunteerism. Maher served as Chair of the San Francisco ACLU and supported Death Penalty Focus, including demonstrating against executions at the gates of San Quentin. She hosted a current events show on KALW (Public Broadcasting) Radio, a City College television show, interviewing students, public officials, professional athletes and civil rights advocates.
Joining the California Irish Forum, which promoted dialogue for a peaceful solution to the conflict in Northern Ireland, by providing a fair platform for all points of view, Maher served as a Board Member and spokesperson on fact-finding group trips to Ireland, in 1985, 1987 & 2005, with meetings across the political spectrum ranging from Republican Gerry Adams to Loyalist Ian Paisley and Irish Prime Ministers Garret FitzGerald, Charles Haughey and Enda Kenny.
Ms. Maher was a member of the United Irish Cultural Center, Secretary-Treasurer of the Irish Literary & Historical Society, Chair of the Irish American Caucus of the California Democratic Party, President of the Irish American Democratic Club and a member of the Irish Mexican Association.
Maher became a Senior Supervisor in the California Department of Justice of Attorneys General Jerry Brown and Kamala Harris, from which she retired in 2013.
Dear Jeannie was pre-deceased by her brother Tom and is survived by her brother Charles of Coeur d'Alene, niece Jennifer Brooks and nephew Richard Maher. Contributions in her name may be made to Death Penalty Focus as well as St. Anthony Foundation, both in San Francisco.
Profound thanks from family and friends are extended to Pathways Hospice, San Francisco and Excellent Care at Home, Lafayette.
A Celebration of Life will be held Friday, September 5, Noon to 2 PM, at the First Unitarian Universalist Church of San Francisco, 1187 Franklin Street, San Francisco.
Published by San Francisco Chronicle from Aug. 26 to Aug. 31, 2014.
To plant trees in memory, please visit the Sympathy Store.
MEMORIAL EVENTS
To offer your sympathy during this difficult time, you can now have memorial trees planted in a National Forest in memory of your loved one.
MAKE A DONATION
MEMORIES & CONDOLENCES
2 Entries
FOND MEMORIES OF JEANNIE WHEN WE BOTH WORKED FOR RAY JOHNSON AT THE ASIA FOUNDATION. SHE WILL BE MISED.
September 5, 2014
I had the privilege of being Jeanmarie's union representative when she worked for the Department of Justice.