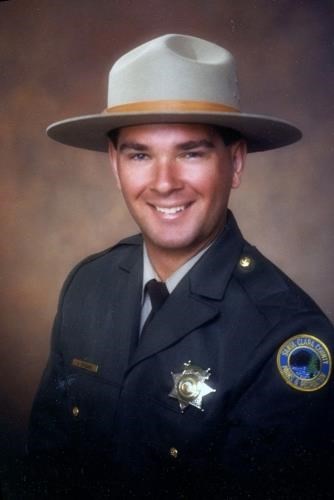 Resident of Foster City, Jeff passed away following complications from a heart attack. At his passing, he was surrounded by his immediate family, extended family, friends and co-workers.

Jeff was born in Palo Alto. He lived for 3 years in Menlo Park before moving to Foster City. He attended primary schools in Foster City and graduated from San Mateo High School in June 1984.

Jeff received his AA in Fine Arts Photography from the College of San Mateo while working part time for the City of San Mateo Park and Recreation Department where he peaked his interest in that field. He continued his education at California State East Bay where he received his BS in Recreational Management and shortly afterward went to work as a Park Ranger in Santa Clara County progressing through the ranks to Captain.

His business card summarized his love of nature with a quote from John Muir: "The clearest way into the universe is through a forest wilderness."

Jeff was preceded in death by his Mother, Charlotte, in 1990. He is survived by his loving wife, Mindy, and devoted children, Megan and Connor, his father, Bob, step-mother, Sue, his step-brother, Dan Dower (Harriet), and step-sister, Coleen Saul (Chris). He is also survived by his in-laws, Bill and Linda Reavely and sister-in-law, Amy Wyman (Brad), and their children, Shane and Sydney.

Friends and family are invited to a Celebration of Life on Sept. 23, 2018 at Beresford Park Recreation Center, 2720 Alameda de las Pulgas in San Mateo from 1 p.m. to 4 p.m. The Santa Clara Co. Ranger Association is planning an event in his memory on Sept. 28, 2018 at Ed Levin Park, Spring Valley Group Area, 3100 Calaveras Road, Milpitas at 1 p.m.

They have also initiated a web page at https://www.caringbridge.org/visit/jeffcossins

Published by San Francisco Chronicle from Sep. 9 to Sep. 12, 2018.
To plant trees in memory, please visit our Sympathy Store.
MEMORIAL EVENTS
Sep
23
Celebration of Life
1:00p.m. - 4:00p.m.
Beresford Park Recreation Center
2720 Alameda de las Pulgas, San Mateo, CA
Sep
28
Memorial Gathering
1:00p.m.
Ed Levin Park, Spring Valley Group Area
3100 Calaveras Road, Milpitas, CA
MAKE A DONATION
MEMORIES & CONDOLENCES
5 Entries
Although some what belated - please accept my deepest sympathies for you loss. My name is Kerri (Cane) Dehoff, and I went to school with Jeff both in Foster City and at San Mateo. Only to come full circle and meet again at Sea Breeze school where we were taking our children! What a great way to catch up with an old friend, when you find out your children are in a school together!

That smile on Jeffs face was still as wonderful as it was all those years ago. I hope he is smiling down on us. God bless you Jeff and family!
May 6, 2019
My sympathies to the family & friends.

I first met Jeff (~2002) at Grant Park when I was a Deputy Sheriff and patrolled that area.

Jeff actually issued me the, then new, Parks-specific padlock key.

More recently, I saw Jeff again at the Field Sports Park shooting range.
Lance Lee
September 27, 2018
I worked with Jeff at Calero/AQ Park back in the summer of 1994.
He was a great guy to work with. I remember he liked to keep his uniform clean, but that didn't get in the way of his ranger duties.
There was once when Jeff and I went out to Almaden Reservoir, which has a no-swimming policy, and he told me to cut a swing rope off a tree at the water's edge. When I balked at doing that, I told him "But Jeff, I used to swing off this rope and swim here myself." So he climbed up the tree and cut it, sparing me the grief.
Good guy, gone way too soon.
Andy Hyslop
September 17, 2018
Very sorry for your loss and grief; may the promise at John 6:40 give you comfort and peace.
September 14, 2018
My condolences to family and friends. May you all find comfort in reading Matthew 5:4 in this time of sorrow.
September 10, 2018
Showing 1 - 5 of 5 results