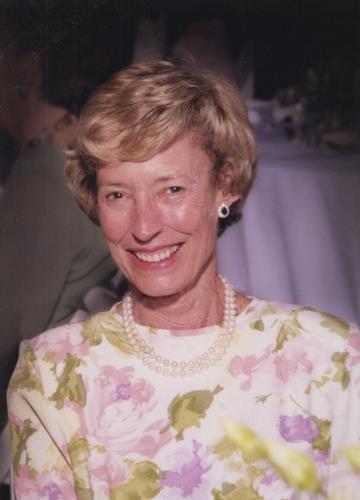 BORN
1936
DIED
2021
Joan Fairbairn Madden
November 20, 1936 – May 18, 2021
Joan Fairbairn Madden, a long-time resident of Ross, California, died peacefully on the morning of May 18, 2021. Joan was born on November 20, 1936 in Grosse Pointe, Michigan, daughter of Mary and Donald Fairbairn. In 1941, the family moved to Ohio and then to Southern California, as her father was in defense production for BF Goodrich during World War II. After the war, the family moved back to Michigan, where Joan attended Birmingham High School and the University of Michigan.

While attending the University of Michigan she met her future husband Richard B. Madden (Dick), who was attending Michigan Law School. They married the year she graduated in 1958 and moved to New York City, where she gave birth to their eldest child, John. The family subsequently moved to Rochester, NY; Bronxville, NY; and finally to Ross, CA in 1971, when Dick became President and Chief Executive Officer of Potlatch Corporation, a Fortune 500 company in the forest products industry.

Joan actively supported children's causes in volunteer and leadership capacities through the San Francisco Junior League and Edgewood Children's Center, where she served on the board for 13 years and as president for two. During that time, the Center modernized the buildings on its campus and broadened its outreach throughout the Bay Area.

In 1994, she became a Dame in the Order of Malta, a lay Catholic order devoted to service of the sick and the poor. She and her husband traveled with the Order on its annual pilgrimage to Lourdes 12 times, accompanying and serving a group of "Malades" on their journey of faith and healing. Later on, she deepened her devotion to the Order by taking vows of Obedience. More recently, Joan volunteered with the St. Vincent DePaul Society of Marin County through St. Anselm's Church in Ross, providing services and support to those in need.

She enjoyed hosting family gatherings at their hilltop home in Ross, as well as entertaining friends for dinners and their annual festive Christmas Eve parties. Joan loved traveling with her husband and children, and took many memorable trips throughout Europe, Asia, and the Middle East. Spending time with her grandchildren in her later years gave her great joy.

Joan was a long-time member of the Francisca Club, the Villa Taverna, and the Lagunitas Country Club. She maintained lifelong friendships and enjoyed playing bridge with friends, reading, and gardening.

Joan was predeceased by Dick, her husband of 57 years, and her brother John Fairbairn.

A private funeral service and burial are planned. In lieu of flowers, donations can be made in her memory to Saint Mary Magdalene Mission Church, P.O. Box 70, Olema, CA 94950.