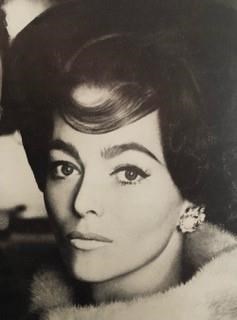 BORN
1930
DIED
2021
Joan Louise Weldon Podell
August 5th, 1930 - February 11th, 2021
With profound sadness, we announce the passing of Joan Louise Weldon Podell, a loving and devoted mother, wife, grandmother and dear friend, on February 11 th , 2021. She passed away peacefully at her home in Fort Lauderdale, FL. A talented and successful opera singer and actress of theatre, film, musicals and television, she was simply known to many as Joanie, whose love for light-hearted pranks and practical jokes spread joy wherever she went.
Born in San Francisco on August 5 th , 1930, Joan was left motherless at six years old and was raised by her grandmother Olio Cornell. Joan made her professional debut at sixteen, with the San Francisco Opera company, the youngest singer under contract. Tireless and hardworking, within a year she made six pictures from 1953-1954 (The System; The Grace Moore Story; The Stranger Wore a Gun; The Command; Riding Shotgun; and Them! (an Academy Award nominee) other movies included Day of the Bad Man, and Home After Dark. As the first performer on the stage at the New York State Theater/ Lincoln Center, she also held leading roles in stage productions such as The Sound of Music, My Fair Lady, The Music Man, Kean, The Merry Widow, Desert Song, Oklahoma, and Carousel. Curious, open minded, determined and always up for anything, her infectious love for life was paired with a firm understanding of what was important– the simplicity of living a life with those you love.
A caring and beloved wife, mother, and grandmother, Joan will be remembered by her husband of 56 years, Dr. David L. Podell Jr., her daughter, Melissa (Jack Weinand) of Paris, France, her grandchildren Sienna, Alexander, and Ella, and stepdaughter Claudia (Frank MacGruer) of Lenox. MA., and family Richard and Carolyn Harcourt, Nancy Bouton, Tara Kadium and Rick Sand. A vibrant and elegant lady, she will be dearly missed by all those who knew this wonderful and extraordinary woman.
MEMORIAL at THE BRICK PRESBYTERIAN CHURCH, LIVESTREAMING, March 13th, 12 o'clock EST
In memory of JOAN PODELL, Donations can be made to the BRICK CHURCH WOMEN'S ASSOCIATION

Published by San Francisco Chronicle from Mar. 3 to Mar. 7, 2021.
To plant trees in memory, please visit the Sympathy Store.
MEMORIAL EVENTS
To offer your sympathy during this difficult time, you can now have memorial trees planted in a National Forest in memory of your loved one.
MAKE A DONATION
MEMORIES & CONDOLENCES
8 Entries
Love seeing her in the films Joan appeared in, during the 1950s. GRIT TV airs several, including one with Guy Madison. Beautiful and elegant woman.
Kevin Barry
November 25, 2021
Our deepest sympathy to Dr David Podell on the loss of his wife Joan.
Caroline Lavelle and Djamel Aliouat
Friend
September 24, 2021
Back in the late 70's when I was a young actor I worked as a houseboy for Joan and the family. She made a big impression on me. She was so kind, gracious, beautiful and supportive of my acting and musical aspirations and even sent me to her voice teacher Ross Barentyne. She was always upbeat and full of energy. A couple of years after I had worked for the Podells I ran into her on the street and she took me out to dinner. Totally spur of the moment. I was in a production of The New Moon at the time and when it was done at City Center encores she invited me to go with her and took me backstage and introduced me to her friend John Reardon. I also have a Christmas ornament she gave me which is a favorite and goes on my tree every year. I had a dream about her last night in which she was giving a party and then was singing after. I woke up feeling that she was communicating with me which is what prompted me to google her and unfortunately found her obituary. She was a great lady and I know she will be missed by her family and all her knew her. I know she's singing again in the spirit world.
Doug Smith
Friend
March 11, 2021
May God bless you and your family in this time of sorrow. Please except my warmest condolences.
Simone Taylor
March 7, 2021
A lovely woman. Joan was a real Classy Lady. She could have been a one of the biggest stars but instead chose real life instead of a “reel” one. I remember she once said she had no regrets. Though we’d not seen each other in many years, she will be forever missed by her NY, Fl and CA friends.
Barrie Milton
Friend
March 4, 2021
A truly beautiful woman, great singer and a fine actress. A great loss.
Terry Betts
March 4, 2021
My first show MUSIC MAN National Co was made inspiring as she was the lead and my husband was her co star. One year on the road ,she brought class ,elegance,and friendship to me as a young performer, when my husband ForrestTucker died ,she called and was very comforting,which I will remember always,Her beauty and talent were unforgetable.
Sheila Tucker
Coworker
March 4, 2021
Sad loss great Lady , great actress .
Charles Baines
Acquaintance
March 3, 2021
Showing 1 - 8 of 8 results