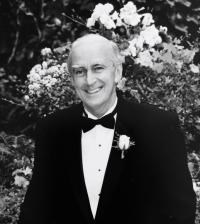 Born in Cleveland, Ohio, died at home in Oakland, California of Multiple System Atrophy (MSA) on March 1, 2015. A resident of the Bay Area for 53 years, he was 75 years old. Jack graduated from Marquette University in 1961 and married his high school and college sweetheart Barbara Boylan. They had three daughters and enjoyed 32 years of marriage and family life until Barbara died in 1994.

Following graduation, Jack was an officer in the US Navy for 4 years, achieving the rank of Lieutenant. He then studied for an MBA at San Francisco State and began working at Coopers & Lybrand, where he was a partner until his retirement in 1999.

Jack married Tish Sprague in 2001 and they enjoyed a great time together with family, friends and wonderful travel. Tish's children and grandchildren adored Jack and will miss him greatly.

Jack was wise, kind, optimistic and enjoyed life to the fullest. He gave generously of his time to several organizations, including many years of service on the boards of the Marcus Foster Institute and the SF-Marin Food Bank. He was an active parishioner at Newman Hall in Berkeley.

He is survived by his wife Tish, daughters Kathleen (Keith) Parker of Piedmont, Karen Campbell of Pacific Grove, Ann (Craig) Thomas of Moraga, grandchildren James Parker, Thomas Parker, Erin Thomas, Brian Thomas and sister Mary Campbell of Columbus, Ohio. He was predeceased by his sister Jane Radigan and brother James Campbell. He is also survived by many beloved nieces and nephews and by Tish's sons Eric, Ethan and Cullen Sprague and their spouses and 7 children.

Friends are invited to a vigil at Chapel of the Chimes in Oakland from 5-7 pm on Thursday, March 5. Funeral mass to be celebrated at St. Albert's Priory in Oakland at 9 am Friday, March 6, followed by a reception and interment at Queen of Heaven Catholic Cemetery in Lafayette. In lieu of flowers, the family requests memorials to the SF-Marin Food Bank, the Brain Support Network or a charity of your choice.

Published by San Francisco Chronicle from Mar. 3 to Mar. 8, 2015.
To plant trees in memory, please visit the Sympathy Store.
MEMORIAL EVENTS
Mar
5
Vigil
5:00p.m. - 7:00p.m.
Chapel of the Chimes
Oakland, CA
Mar
6
Funeral Mass
9:00a.m.
St. Albert's Priory
Oakland, CA
Mar
6
Interment
Queen of Heaven Catholic Cemetery
Lafayette, CA
Funeral services provided by:
Chapel of the Chimes Oakland & Memorial Park
MAKE A DONATION
Please consider a donation as requested by the family.
MEMORIES & CONDOLENCES
2 Entries
Jack was a wonderful Partner and mentor to many of us at Coopers & Lybrand. I am sorry to hear of his passing. I know he will be missed by his family and friends.
Laura Bustamante
March 11, 2015
I want to express my deepest sympathy for your loss. May you find consolation in knowing that God love and sustain you in your time of need.
March 8, 2015
Showing 1 - 2 of 2 results