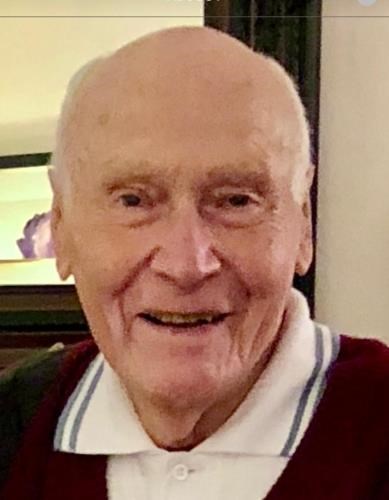 BORN
1927
DIED
2021
FUNERAL HOME
Duggan's Serra Mortuary
500 Westlake Avenue
Daly City, CA
John Joseph Smith
June 4, 1927 – October 9, 2021
John passed away peacefully at his home on October 9, 2021 surrounded by his family. He is survived by his loving wife Peggy, son Patrick, daughter-in-law Kathy, and two granddaughters Siobhan and Fiona, as well as many nieces and nephews. He was preceded in death by his parents Patrick and Elizabeth; his 5 siblings: Tommy, Pappy, Matt, Kevin and Kathleen; and many close friends.
John was born and raised on a farm in County Cavan, Ireland and immigrated to the United States in 1948. He started his life in the US working on a farm run by Catholic nuns in New Jersey. During the Korean War, he served in the Army with distinction on the front lines, was wounded, and received the Purple Heart. He always believed his Catholic faith helped him survive. After the war, John eventually made his way to San Francisco where he settled and made his life. He joined his uncle in running a tavern on the bustling SF Waterfront where he encountered many colorful characters.
It is in SF that he met his loving wife, Peggy, of 61 years and raised his family. Over the years he enjoyed following the Giants and 49ers as well as fishing trips from San Francisco all the way to Alaska. But most of all he enjoyed being around family, especially his granddaughters.
He always had a twinkle in his eye and a light heart.
Private services were held. If desired, any donations can be made to the Disabled American Veterans organization.

Published by San Francisco Chronicle from Oct. 13 to Oct. 24, 2021.
To plant trees in memory, please visit the Sympathy Store.
MEMORIAL EVENTS
To offer your sympathy during this difficult time, you can now have memorial trees planted in a National Forest in memory of your loved one.
Funeral services provided by:
Duggan's Serra Mortuary
MAKE A DONATION
Please consider a donation as requested by the family.
MEMORIES & CONDOLENCES
Sponsored by Duggan's Serra Mortuary.
8 Entries
RIP John Condolences to Peggy Pat,Kathy,Siobhan and Fiona
Peter & Trish Quirke
October 23, 2021
Sorry Peggy for your great loss
Margaret and Thomas Kennedy
October 21, 2021
Sorry to hear of John´s passing. He was such a good friend to my parents. I am sure they will have some great parties up there!
Bernadette (Greene) Wozniak
October 16, 2021
Our deepest sympathies to Peggy, Pat, Kathy, Siobhan & Fiona. We are all so saddened by the passing of John. He was always so welcoming, kind & a true gentleman. He was one of those great warriors. We all have such lovely memories of John and will cherish them forever. My he rest in peace. Our thoughts & prayers are with you all in this tough time xx
Kevin, Maureen & Claire Whelehan
October 15, 2021
please accept my sincere sympathy - always a smile for me and a hug, wonderful man and a lovely family. know that my love and prayers are with you.
kaaren alvarado
October 14, 2021
Sorry for your loss.
John and Mary Mckeon
Family
October 14, 2021
Dear Peggy, Patrick, Kathy, Siobhan, and Fiona, Greg and I are so sorry to hear about John's passing. We have so many fond memories of John at Grandma and Grandpa Farley's house and of course as our neighbors on 27th Ave. We will always be so grateful to John for his kindness helping our mom out in her later years. He will be missed by all his Farley cousins!
Cece Bechelli
Family
October 14, 2021
Patrick, So very sorry to hear of John´s passing. I always loved meeting him and having a chat. May he RIP. Breeda
Breeda Kenneally
October 13, 2021
Showing 1 - 8 of 8 results