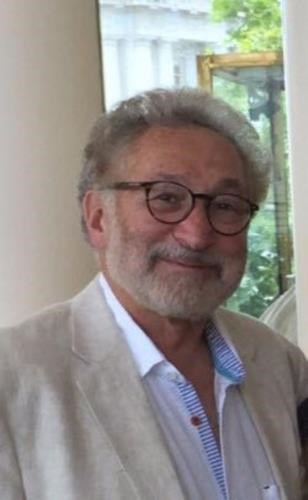 Josef Cooper passed away peacefully on November 25, 2018, surrounded by family and close friends, after a very short battle with aggressive pancreatic cancer. Joe was the loving and beloved husband of Tracy Kirkham; father of David Cooper, Maile Cooper Christensen, Gillian Cooper, Sydney Cooper and Greer Cooper; father-in-law of Marisa Cooper and Jon Christensen; and doting grandfather of Kai Cooper, Samantha Christensen and Trey Christensen. He is also survived by his sister, Eleanor Lewis of Dayton, Ohio, nephew Hank Blumenthal, nieces Amy Blumenthal and Nancy McManus, five great-nieces and nephews, and many cousins with whom he had close and loving relationships. Joe was a prominent attorney with a national reputation, specializing in complex business and class action litigation. At the time of his death he, along with his wife, were senior partners at Cooper & Kirkham, PC.

Joe was born in New York City, the second child and only son of Ralph Cooper and Gertrude Robinson Cooper. He was raised in Richmond, Virginia and Cincinnati, Ohio. After attending Walnut Hills High School, he spent a year studying engineering at the University of Cincinnati. He then transferred to Oberlin College, a decision that transformed his life. Joe became active in student government at Oberlin, where he, along with several other student leaders including Paul Potter and Rennie Davis, began questioning whether American students could and should play a role in public life and policy beyond the traditional aspects of student government. During that time, Joe took a student trip to Cuba where a chance encounter – for him and a small group of students – led to a lengthy discussion with Fidel Castro and Che Guevara. Back at Oberlin, Joe, along with Potter and Davis, were instrumental in the formation of a student political party called the Progressive Student League. As part of this group, Joe traveled to the University of Michigan to meet with activist Tom Hayden and other student leaders from around the country. Shortly thereafter, Oberlin's Progressive Student League merged with other student groups to form Students for a Democratic Society (SDS), a key player in the student-led counter culture and anti-war movement of the late '60s and early '70s.

After graduating from Oberlin College, where he met his first wife, Carol Donley, the mother of his oldest two children, Joe attended the University of Chicago Law School and received his J.D. in 1964. Phil Neal, then the Dean of the Law School, offered him a job as a staff attorney for the Coordinating Committee for Multiple Litigation of the United States Courts, provided he agree to shave off his beard. Although he lost his beard, he gained valuable experience in an area of law that he would pursue the rest of his life. As staff attorney for the Committee, Joe worked alongside a group of federal judges designated by the Chief Justice to study the relatively new problem of multiple antitrust and consumer protection cases against the same defendants being filed in different district courts around the country. During this time, Joe participated in drafting the federal legislation that provided for all such cases to be brought together before a single judge for pre-trial proceedings, as well as the first edition of the Manual for Complex Litigation. In 1966, the Committee assigned him to serve as a Special Assistant to the Honorable Martin Pence of the District of Hawaii, who was presiding over the first pre-trial proceedings conducted under the newly enacted statute. Joe and Martin Pence formed a deep bond that lasted until the judge's death. Joe was a founder and an Advisory Committee member of the Judge Martin Pence Fellowship Fund, established at the judge's alma mater, the University of California, Berkeley, School of Law, to identify under-served students from Hawaii and provide them with access to the law school.

After several years in private practice in Chicago, Joe moved to San Francisco in 1973 to form an antitrust and class action practice with Francis O. Scarpulla. Although that firm dissolved in 1979, Joe and Fran enjoyed a life-long friendship. In 1991, Joe formed his current firm, Cooper & Kirkham, with his second wife, Tracy. Joe was listed in The Best Lawyers in America for more than 30 years. He is the past chairman of the Private Litigation Committee of the A.B.A.'s Antitrust Section, and as such, testified before the Senate Judiciary Committee on proposed antitrust legislation. He represented scores of individuals, governmental entities and corporations in class action lawsuits against defendants such as Microsoft, De Beers, LG and Samsung that returned billions of dollars in recovery to consumers and businesses throughout the United States and Canada. His clients have included Safeway, Inc., the Oakland Tribune, and the states of Nevada, Arizona and Oregon (Public Employees Pension Fund), among others.

Along with the law, Joe was passionate about education, believing that a progressive, social justice oriented education was critical to raising responsible citizens who would care for themselves, other people and the environment. In addition to his work on the Pence Fund, Joe endowed a scholarship in his mother's name that provides the opportunity for students who cannot afford college to attend Oberlin. Along with Tracy, Joe was a founder and principal benefactor of Children's Day School, an independent preschool and elementary school in San Francisco, and a great supporter of the Drew School, a progressive independent high school in the city.

Despite leading such an active professional and philanthropic life, Joe valued family and friends above all, always finding time to do the things he enjoyed most such as skiing at Kirkwood and going to concerts and shows. He had a sly and sharp wit that he shared easily, whether he was with a grandchild, a young adult or a contemporary. He was happiest when sitting at a large table sharing a meal and animated conversation with family and friends. His season ski pass, purchased just before his diagnosis, will go unused, but will serve as a reminder that Joe always felt one should live life to the fullest.

If you would like to honor Joe, please make a donation in his name to Children's Day School, the Drew School, the Pence Fund, Oberlin College or a charity of your choice. A celebration of Joe's life will be held on January 17, 2019, at 1pm at San Francisco's Temple Emanu-El. For more information, please email [email protected]

Published by San Francisco Chronicle from Dec. 12 to Dec. 18, 2018.
To plant trees in memory, please visit the Sympathy Store.
MEMORIAL EVENTS
Jan
17
Celebration of Life
1:00p.m.
San Francisco's Temple Emanu-El
CA
MAKE A DONATION
Please consider a donation as requested by the family.
MEMORIES & CONDOLENCES
3 Entries
Tracy - I was shocked and saddened to hear this news about Joe. It was a joy and privilege to know him. CDS has been so important to our family and we have Joe (and you) to thank for that. We are thinking of you and the girls.
From Karen Kennard, and Peter and Miranda Phaal
Karen Kennard
December 18, 2018
Tracy and family, very sorry for your loss.
Carole Levenson
December 16, 2018
My condolences to the Cooper family. May the peace from God comfort you during this difficult time.
December 12, 2018
Showing 1 - 3 of 3 results