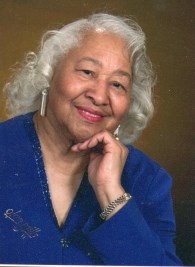 Born in Cheraw, South Carolina to Dr. Caston and Louise Butler Lynch, Kathryn was the first of two children. At the age of three her mother moved Kathryn and her brother, Caston, to her family in Waycross, Georgia after the death of her father.

Kathryn attended the public schools of Waycross, Ga. where she excelled academically especially in science, music, and foreign language. She graduated from Center High School and enrolled in Fisk University in Nashville, Tennessee where she majored in zoology and minored in chemistry. It was at Fisk where she met and married Alphonso Campbell.

She and Al settled in his hometown, St. Petersburg, Florida where she began a career as a medical technologist. She soon decided to become an educator which gave the added benefit of having the same vacation time as Al, who was a high school science and mathematics teacher and football coach. Eventually, with six children they relocated to California where Kathryn was employed as a teacher in the Jefferson Elementary School District in Daly City; retiring in 1998 as a reading specialist.

Kathryn loved sports, especially the Forty-niners and the Giants. She loved music in all its various genres, particularly spirituals, gospel, jazz, classical, and soul. She was an excellent cook and seamstress. She was a faithful member of Third Baptist Church and an active member of Delta Sigma Theta Sorority, Inc.

Published by San Francisco Chronicle from Apr. 6 to Apr. 7, 2013.
To plant trees in memory, please visit the Sympathy Store.
MEMORIAL EVENTS
To offer your sympathy during this difficult time, you can now have memorial trees planted in a National Forest in memory of your loved one.
MAKE A DONATION
MEMORIES & CONDOLENCES
26 Entries
To our Beloved Family, As we approach the 7th Anniversary of our Beloved Mother, Kathryn, let us reflect upon the teaching of her values, her great wisdom and understanding of how she would assist us in our daily life.
I will trust and not be afraid, for the Lord is my strength and my song. God is my strength and my power. He makes my way perfect.
Bountiful blessing and keep the memory alive in your heart.
DeNeal Cunningham
Friend
March 31, 2020
We loved her dearly but God loved her best, so now its time for her to rest. To Al and family; you will always be in my prayer. Sharing in your loss. Bonitta
Bonitta Campbell
April 23, 2013
Campbell Family,
I'm so sorry to hear of the passing of your mother. Know that our hearts and prayers are with you all in this hard time. Remember to keep God first in your hearts. Knowing that she is with him acting as your personal angel, watching over and guiding your steps. She's still paving the road for the journey you still have to travel. She's just gone ahead to continuing the work she always did here on earth. Loving and watching over all of you all, with open arms and her warm smile.
Our Love To You All
Tracy Baker and The Baker Family
April 15, 2013
To Kathy and Family, May God continue to bless and keep you and your family. Your Mom, Kathryn was a special mother. She was always there for you and your sisters and your Dad. She will be sadly missed.
DeNeal Cunningham
April 14, 2013
Kathy my prayers to you and your family. Your beautiful Mom is in Heaven and with you every step of the way. Thank you for being there when my mom went to Glory. Memories are so precious and always in your Heart Love Gwen & Autumn
Gwendolyn Washington
April 12, 2013
Words cannot express my sadness when I was told of Kathy`s transition. After recollecting thoughts of this beautiful co-worker and friend, I settled down to remember her such.
Dee McKenney
April 11, 2013
I remember Mrs. Campbell when my daughter, Caitlin (who went to the prom with her grandson, Charles 3x) would take their before-prom pictures in her living room. And every time, we would say to each other, "Here we go again." My condolences to the Campbell and Grant Family. May God continue to bless her. She's with my father (who passed 2 months ago) up in heaven watching the Giants game. God sure gave us a piece of heaven through this beautiful lady.
April 10, 2013
I worked with Kathy for several years.She was a very kind gentle loving person and was always encouraging our black kids to excel, especially in reading. So sorry to hear about her passing but I am confident that her legacy will forever live on, not only in the hearts of her family but with all the students she touched
Maxine Riley
Maxine Riley
April 9, 2013
My beautiful and sweet mom away from home. I am so thankful that I saw you at our Dear Old Gold and Blue recently. Thank you for extending your warm and gentle spirit to me and Gina and treating us like your own daughters. Thank you Campbell Family for sharing Mom with us. With a very heavy heart, sending love, prayers and blessings.

~Erin
Erin Toole Williams
April 8, 2013
Ill always remenber you and love you.
DeLores Lewis
April 8, 2013
Kathryn: My heart is so sad, but I know you are in the loving arms of GOD! I will pray as you transition to Omega Omega Chapter of Delta Sigma Theta Sorority.
Deepest Love,
Cousin and Soror Barbara
Barbara Lester
April 8, 2013
Dear Cambpell Family:
Our thoughts are with you at this time of sorrow. The passing of the metriarch took us by surprise but God knows why now. Remember this, she is at peace; no more pain. She was a beauty and truly elegant. We will sorely miss her smile and kindness. Rest in peace neighbor till we meet to path no more.

The Ezekwos,
South San Francisco, California.
April 8, 2013
My prayers and heart go to the entire family. Mrs Campbell was truly a sweet women. She will be missed greatly
Tenaya L Cannon
April 8, 2013
Kathryn,you have left us much too soon, but since you had to go, we are sending our prayers and the Irish Blessing with you: "May the roads rise gently to meet you and may the wind be always at your back; may the sun shine warmly upon your face and may the rains fall softly upon your fields; and until we meet again, may God hold you in the palm of his hands". Sayonara!

Tom & Koko Campbell
Tom & Koko Campbell
April 8, 2013
Sending prayers to the entire Campbell family. Love you dear Kathy, "Forever on the Altar,"
Damara Lynn Greene
April 8, 2013
Missing you already. Knowing that Heavens' gate has open wide to receive you. All my love and condolence to the family. Kat, I love you!
Renee Brown
April 8, 2013
Our hearts and prayers ??are with the family. May GOD bless and keep you in HIS perfect peace. May GOD's Love Strength, Courage and HIS Greatest Blessings in JESUS be yours forever. Stay Strong and know that GOD will take care of you?Walk by Faith?
Dr. Russell & Dierdre (Downing) Jackson
April 8, 2013
Aunt Kat, you will truely be missed, I love you very much. RIP, and I'll see you soon.
Gayle Lewis-Barton
April 8, 2013
To the Campbell Family:May it help to know that others care and share in your loss.God's blessings be with you always.
VIOLA MANNNING
April 7, 2013
Mrs. Campbell and the entire Campbell family has held a special place in my heart for 40 years. I could never forget her natural beauty, or the class, the grace, the love and understanding she shared with so many, including myself. Hide her spirit in your heart, it will guide you from here. I will continue to pray for your peace and understanding.
Ronald Hamilton
April 7, 2013
To The Family,
You are in our heart and our prayers.There are no words that can truly express what Roger and I feel. Your Mom has and will always hold a special place in our hearts. She meant so very much to us. She was like our second mother. We wilmiss her. Her beautiful smile will forever be etched in our memories of her. We love you and will be prayaing for you through this most difficult time.
Roger & Tina
Roger & Tina Winrow
April 7, 2013
TO THE HOMEGOING FOR AUNTIE,NO MORE PAIN,YOU R HOME NOW WITH OUR FATHER. SEE YOU WHEN I GET THERE. TO MY CALIFORNIA FAMILY, NO MORE CRYIN,NO MORE WORRYIN, SHE IS FEELIN GREAT NOW.
TERESSA DENNISON-MCCLENDON
April 7, 2013
As a former student at Serramonte High School, who of us did not know Mrs. Campbell? Mr. Campbell, you were there with such kind words upon my Mothers passing for me at age 16, today I extend the same kindness to you and your family. Prayers for you at this time of loss. She is not really gone for we all cherish her in our hearts.
Rebecca Cruz
April 7, 2013
Dearest Kathy,
May the peace of the Lord be with you as you mourn the loss of your beloved Mother and our sweet Soror. I pray that faith and love will close the hole left in your heart by such a loss. While it may be difficult to imagine right now, nothing is impossible with God. I am inspired by the apparent love your parents had for each other and know that the love of his life is now heaven's newest angel. My God give you peace and comfort as you grieve. Celebrate her life and remember God is good all the time. My love to you and your devoted family. She will surely be missed.
Terri Thompson
April 6, 2013
There are no words to describe how blessed we have been and continue to be by your life, legacy and family.
The Conners
April 6, 2013
sorry for your lost we had many fun years playing in that yard on 20th ave . Tell skip ,kenny al, and kathy my thought with them too wesley sheffield#
wesley sheffield
April 6, 2013
Showing 1 - 26 of 26 results