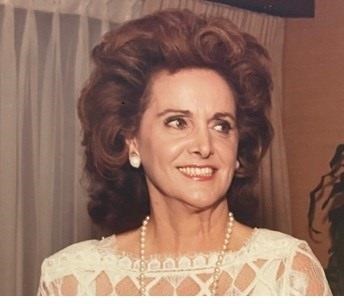 BORN
1925
DIED
2021
FUNERAL HOME
Crosby-N. Gray & Co. - FD-96
2 Park Road
Burlingame, CA
Lola Bertolucci Fox
October 2, 1925 – January 27, 2021
Lillian "Lola" Bertolucci Fox passed away peacefully of natural causes at home in San Jose on Wednesday January 27 at the age of 95. She was born in San Francisco in 1925 to Joseph and Tisbe Bertolucci (AKA Mama Bertolucci), and lived most of her life in San Francisco and the SF Peninsula. Lola was pre-deceased by her parents, her sister Irene, her son Dean, her first husband Martin Bogdan, her brother Larry Bertolucci, and husband Charles "Charlie" Fox.

Lola's life was always centered around family and she loved to cook, play tennis, and engage with friends. It was very important for her to provide her sons a Jesuit education (St. Ignatius, Santa Clara University, and Gonzaga University).

Lola's parents purchased the Liberty Hotel and Bar in South San Francisco in 1928 where workers from the shipyards were fed and boarded. Later Joe's Blue Room and Bar was built onto the existing building. In 1962, Lola and her brother Larry were enticed into the business by their parents, the restaurant was rebuilt, elegantly designed in Florentine décor, and the name was changed to Bertolucci's Restaurant. Over the years, Bertolucci's became a magnet to celebrities from the sports world and Hollywood, in addition to entertainers, Italian opera singers, Governors, Senators, and members of Congress. Over five generations of San Francisco and Northern Peninsula families and businesses often celebrated their special occasions at Bertolucci's. Lola and Larry owned and ran the business until their retirement and its eventual sale in 2005.

In 1985, Lola married Charlie Fox, who spent over 50 years in professional baseball and is best known by local Bay Area fans as the Manager of the San Francisco Giants from 1970 to 1974, earning Charlie the National League Manager of the Year award in 1971 after guiding the San Francisco Giants to a National League West Title. Charlie later became General Manager for the Montreal Expos and then worked with the Chicago Cubs, The New York Yankees and the Houston Astros. For many years, Lola and Charlie enjoyed traveling and being involved in Major League Baseball. Charlie eventually developed Alzheimer's and passed away in 2004.

The family wishes to thank Malivahn "Mali" Khamiseng, Lola's loving health caregiver and friend, who made it possible for Lola to stay at home.

Lola is survived by her three sons: Dr. Mark Bogdan (and his wife Marina), Dennis Bogdan, and Gary Bogdan Bertolucci (and his wife Kelly), as well as step-son Michael Fox (and his wife Mary); Grandkids: Dr. Ryan Bogdan (and his wife Arpana), Bridget Fox, Jenna Brehmer Compain (and her husband Adam), and Marissa Brehmer, as well as her great grandchild Maya Bogdan. In addition, she is survived by many cousins including Robert Guastucci (his children & her Godchildren: Laura, Dana, Jennifer, Kris, Adam and Jason) as well as many nieces and nephews including: Marcia Melnikoff (husband Fred, daughters Melissa and Cristina (husband Zack, children Lauren and Brendan), David Kaffun (his wife Patrice) and their families.

Due to the current COVID19 Pandemic the service will be held virtually, not in-person. A Celebration of Life will be scheduled at a later date. The virtual service will be held Thursday February 25 at 1:00 pm. If you would like to attend the virtual service and / or offer a few kind words or memories during, please send an email to [email protected] with your name, relationship to Lola, email address and phone number, and we will send you a Zoom invite with information and instructions, and also keep you updated once the Celebration of Life can be scheduled.

Published by San Francisco Chronicle from Feb. 10 to Feb. 14, 2021.
To plant trees in memory, please visit the Sympathy Store.
MEMORIAL EVENTS
To offer your sympathy during this difficult time, you can now have memorial trees planted in a National Forest in memory of your loved one.
Funeral services provided by:
Crosby-N. Gray & Co. - FD-96
MAKE A DONATION
Please consider a donation as requested by the family.
MEMORIES & CONDOLENCES
Sponsored by Crosby-N. Gray & Co. - FD-96.
0 Entries
Be the first to post a memory or condolences.