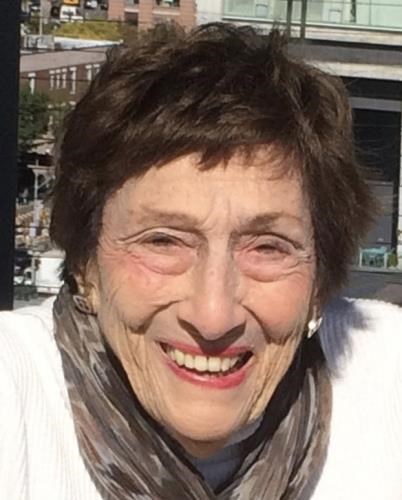 Family and friends of Lorraine Ruth Honig are sad to announce her passing on January 13, 2019. Lorraine was a remarkable and unique individual; a woman of exceptional strength, courage and sensitivity, who was deeply devoted to her family and friends, as well as to progressive causes that sought to build a more just and equitable world.

Lorraine was born in San Francisco on February 26, 1924 to parents Julius and Dorothea Harband. She grew up in San Francisco and the Peninsula, and graduated from Stanford University. She then moved to New York where she completed a Masters Degree in Social Work at Columbia University. While living in New York, she met her future husband, Victor Honig, on a blind date to participate in the 1948 May Day March to support the Progressive Party's presidential candidate, Henry Wallace. That was the beginning of their long life of activism together. After working as a social worker in New York for several years, Lorraine moved with Victor back to San Francisco, which was their home for the rest of their lives.

Lorraine raised two daughters, Emily and Lisa Honig. She went on to work as a social worker at Woodrow Wilson High School, where she found great satisfaction in working with the students, most of whose backgrounds were very different from her own. After retirement, Lorraine and her husband continued their involvement in activism and commitment to community organizations, contributing their efforts to grassroots social change both locally and nationally. They also shared a passion for travel, art, and music. They were avid hikers and particularly loved Yosemite and Pt. Reyes National Seashore, where Lorraine also loved to birdwatch and see the wildflowers every spring.

Lorraine was known by all of her friends and family as a gracious, empathetic, smart, engaged, and most notably, vibrant woman. She was both emotionally and intellectually intelligent. Throughout her life, Lorraine was engaged in a multitude of activities that bettered the lives of others and furthered her own intellectual and emotional development. She served on the Board of Coleman Advocates for Children, the Interdisciplinary Committee on Aging at USF, and was active in the Older Women's League, whose director described her as having "tireless energy, razor sharp instincts, and a willingness to persevere for whatever cause she championed." For many years, she attended the Fromm Institute, taking classes ranging from music to literature to politics.

She was a life-long participant in protest movements for issues including civil rights, nuclear testing, the war in Vietnam, and the Israeli occupation of Palestine. Even in her 90's, she organized political presentations at the San Francisco Towers, where she lived, and belonged to a reading group, a poetry group, several committees, and a group of residents who called themselves "the left-leaning ladies." In a quiet but determined way, she engaged in efforts to improve conditions for the Towers' staff.
She was a strong, independent woman who knew what she liked, regularly attending performances at the SF Symphony, SF Jazz, Berkeley Repertory Theater, the Magic Theater, SF Playhouse and several other community theater and cultural groups – even if it meant attending alone. Her circle of friends included people of all ages; she particularly enjoyed the company of and conversation with younger people, who satisfied her endless curiosity about issues facing different generations., from the political to the personal. While she was politically savvy, she was eternally optimistic, often commenting that one never knows what can happen to cause a change.

Lorraine was a quintessential role model for what it means to live life fully and age gracefully. She made a mark on everyone whose path she crossed, and she will be deeply missed by all who knew her.

She is survived by her two daughters, Emily and Lisa Honig, her daughter-in law Dale Schroedel, and her two grandchildren, Jesse Honig and Isabel Honig Schroedel. Contributions in her memory can be made to the Center for Investigative Reporting (CIR) or the Marin Agricultural Land Trust (MALT).

Published by San Francisco Chronicle from Feb. 15 to Feb. 17, 2019.
To plant trees in memory, please visit the Sympathy Store.
MEMORIAL EVENTS
To offer your sympathy during this difficult time, you can now have memorial trees planted in a National Forest in memory of your loved one.
MAKE A DONATION
MEMORIES & CONDOLENCES
3 Entries
As a young man from Pt. Reyes I worked for your parents at their property in the Inverness hills. I would clean the roof, gutters and decks of tree debris as well as cutting the brush back on the driveway. I looked forward to seeing your parents when they were at the house. Your mom and I would have conversations about many varying topics.She was a wonderful women and I have fond memories of those days.
I am sorry for your loss.
Mike Velloza
February 21, 2019
Condolences to the family. '
- Jody and Anita Harband, Beitar Illit, Israel
February 17, 2019
Wonderful cousin, wonderful life-story.
Martin Harband
February 16, 2019
Showing 1 - 3 of 3 results