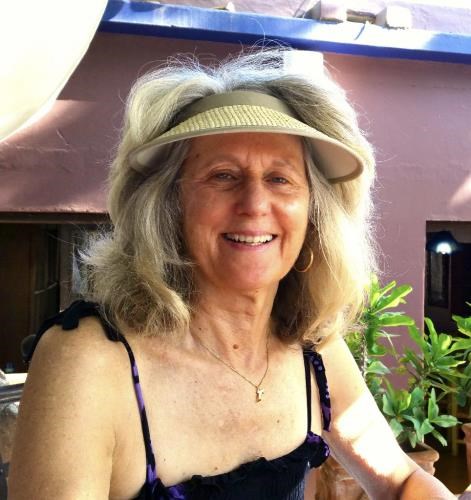 BORN
1950
DIED
2020
Lynda C. Vurek-Martyn
Dec 24, 1950 - Oct 30, 2020
On October 30, 2020, Lynda Vurek-Martyn passed away after a difficult 3 month-long battle with cancer. The suddenness of her passing shocked her family and friends. But in honor of her memory, we can take solace in the fact that Lynda lived every moment of her life with a passionate intensity that allowed her to deeply touch so many in her time on earth.
Lynda was born December 24, 1950, to Ken and Rhoda Martyn in Palo Alto, California. She is survived by her husband Jerry Vurek-Martyn; son Del (Liz) Bahner; step-son Matthew (Peggy); sister Rhonda Martyn (Joe Novello); brothers, Ken Martyn (Kendra) and Rick Martyn (Julie); and nieces Calla, Helena, Audra, and Abby and nephews Brandon, Geremy, and Tino.

Lynda's important educational achievements at UC Santa Barbara and University of San Francisco Law School led her to several early career professional successes. Her friends and family, however, will remember Lynda's most for her advocacy of social and environmental causes; commitment to keep her close women friends together for support and companionship; and her life-long quest to understand and access the spiritual connection and energy surrounding all of us.

Lynda's early success as a lawyer demonstrated her willingness to take on big corporations. In 1988, the Bohner & Martyn legal team, represented an under resourced environmental non-profit Amigos de Bolsa Chica. Lynda contended that a 1973 deal between the two primary landowners of the wetlands, Signal Oil and the state of California, was illegal. Through her tireless efforts she was able to overturn an agreement that gave developers hundreds of acres in the deal that, combined with other land the company owned, would have created a $1-billion residential development and marina on the critical wetland preserve.

In spite of her success with law, Lynda searched for something more in her life than being an attorney litigating legal solutions. She gravitated at first to mediation/arbitration before dedicating the final decades of her life to spiritual healing. She found a path for expressing her passion and gift through Jin Shin Jyutsu and established a thriving practice as a certified healer and practitioner.

The alchemy of her interest in law, women's rights, and spirituality led her to take on several causes. In 2008, Lynda helped start The Second Sunday Spiritual Group in San Francisco. Over the years, she has been instrumental in ensuring the group's spiritual practice and sustainability. In 2011, Lynda marshaled the resources of her woman's spiritual group to contribute to ChildFund International to create a sponsorship for Maria, a four-year old girl living in Bolivia. Their years of contributions helped ensure Maria had what she needed to grow up healthy, educated, skilled and safe. In 2015, Lynda and Del traveled to Bolivia to meet her. Lynda regularly corresponded with Maria and visitors at Lynda's house could see pictures of Maria alongside pictures of other members of Lynda's family.

Lynda relished spending time in her beloved redwood groves in Purisima Creek Redwood Open Space Preserve. Traveling with Jerry to exotic locations around the world. Spending time with Del and wife Liz. Joining friends for wine tasting at Sequoia Grove Winery. Attending the San Francisco Ballet, San Francisco Symphony and Oakland Symphony with Jerry and her many friends. Participating in her long-running book club with dynamic and playful explorations of political, historical, classical, and inspirational books and novels. Organizing a small group of like-minded women who met regularly for companionship and support.

Her family and close friends know Lynda for her force of personality, humor, spirituality, passion, fierceness of conviction, and courage.

Due to the considerations for COVID 19, the family has arranged for a small private outdoor funeral service. In lieu of flowers, the family would appreciate donations be sent to Save The Redwoods League.

Published by San Francisco Chronicle from Nov. 29 to Dec. 6, 2020.
To plant trees in memory, please visit the Sympathy Store.
MEMORIAL EVENTS
To offer your sympathy during this difficult time, you can now have memorial trees planted in a National Forest in memory of your loved one.
MAKE A DONATION
MEMORIES & CONDOLENCES
2 Entries
Was such a kind neighbor...I lived right next to her at 590...will truly be missed
Zachary Nascimento
Neighbor
April 10, 2021
I was one of her roommates at UCSB and always marveled at how fully she enjoyed everything and yet could dive deep into her studies with equal vigor. It is good to know that she continued to live a very full life as enthusiastically, smartly and heartfelt as when I knew her and more. My condolences to her family and friends with lots of love, from Ann
Ann Enkoji
Classmate
December 20, 2020
Showing 1 - 2 of 2 results