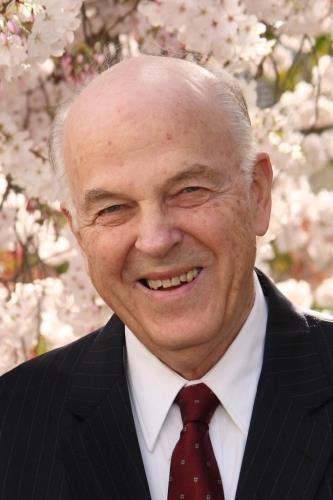 BORN
1932
DIED
2021
FUNERAL HOME
Crippen & Flynn Funeral Chapels
400 Woodside Road
Redwood City, CA
Malcolm Hardy Dudley
September 11, 1932 - February 10, 2021
Malcolm Hardy Dudley, former Mayor of Atherton, businessman, naval captain and musician, died peacefully on February 10, at home in Atherton with Cosette Dudley, his wife of 67 years, and his two daughters, Lynette Stebing and Virginia Rock. He will be remembered for his love of family and extended circle of friends, his generosity, kindness, and engaging character. Malcolm greeted people with a warm smile, friendly handshake and an enthusiastic story. He always took great interest in helping people, and believed in fairness and opportunity for all. Malcolm's charismatic, thoughtful, trustworthy and caring personality drew people to him.

Malcolm was born in Santa Cruz, California in 1932, the son of Allen Mason Dudley and Gladys Alda (Hardy) Dudley. The family, including his sister Carol, moved to Sacramento in 1942, after the start of WWII. Malcolm attended Sacramento City College from 1950 - 1952 and University of California, Davis from 1952 – 1954. As two young college students, Cosette and Malcolm married in 1954. They initially earned a living from Malcolm's popular dance band, which played frequently in the Sacramento area. After his graduation from UC Davis, he was commissioned as an Ensign in the U.S. Navy and was assigned to the USS Florikan (ASR-9), a submarine rescue vessel, where he served from 1954 - 1956 as navigator, operations officer and communications officer. After completion of his duty, he was offered the opportunity to serve in the U.S. Naval Command Staff in London, England, where he spent the next three years with Cosette and daughter, Lynette. Malcolm served as a communications officer for the U.S. Naval Command Europe from 1958 to 1961. During that time Malcolm also did graduate study evenings in international monetary economics at the London School of Economics. Malcolm continued as a member of the naval reserve, for a combined total of 32 years. He held several commanding officer positions, retiring as a naval captain in 1982.
On returning to the U.S. in 1961, the family moved to Atherton, where Cosette and Malcolm have remained since. Malcolm entered the investment business with Dean Witter & Co. in 1962, and continued to work as a financial advisor until his retirement in 2017. In addition to his career in the investment business, he had an interest in local politics. In 1976 he ran for the Atherton City Council, on which he served 24 years, six as the mayor. He was elected to several regional bodies during that time, and he is credited for numerous transportation projects, helping lead the town in areas of finance, environment and culture.

In his spare time, he had a love for boating and jazz music. He relished being out on Lake Tahoe in his ski boat during the annual summer family vacation at Camp Richardson, as well as taking many voyages in their 70-foot motor vessel, MV Lisa Marie, which was moored at the San Francisco Marina Yacht Harbor. During summers he regularly took the Lisa Marie up the coast, inviting family and friends to cruise the San Juan and Canadian Gulf Islands and Desolation Sound. His interest in music started as a teenager playing the saxophone, an enjoyment which lasted his lifetime. Soon after moving to Atherton, Malcolm joined the Unicorns swing band and continued to play with them until this year. He encouraged and supported the musical efforts of those around him.
A family celebration of his life will take place at East Lawn Memorial Park, Sacramento, where his ashes will be interred. A memorial will be arranged at a later date to honor a life well lived, at Saint Mark's Episcopal Church, Palo Alto.
Malcolm is survived by his wife, Cosette, two daughters, Lynette Stebing and Virginia Rock, four grandchildren, Chris Van Kirk, Thomas Van Kirk, Charlie Rock and Sierra Rock, three great grandchildren, and sister, Carol Foster.

Published by San Francisco Chronicle from Feb. 26 to Feb. 28, 2021.
To plant trees in memory, please visit the Sympathy Store.
MEMORIAL EVENTS
To offer your sympathy during this difficult time, you can now have memorial trees planted in a National Forest in memory of your loved one.
Funeral services provided by:
Crippen & Flynn Funeral Chapels
MAKE A DONATION
MEMORIES & CONDOLENCES
Sponsored by Crippen & Flynn Funeral Chapels.
3 Entries
Mal was a great friend. I played alto sax in his band in the 1950´s, the Sacramento area. Dances, Chanel 40 TV, Memorial Auditorium and much more. My condolences to the family. Richard Gould
Richard Gould
Friend
September 12, 2021
Wow, what an amazing gentleman and long-time friend he has been. Bill and Jeanne Kunz
JEANNE & BILL KUNZ
Friend
March 5, 2021
Malcolm was the greatest, kindest, most generous and brilliant yet modest person I have ever known. My life was blessed thanks to his having been a friend and professional advisor to me for the past 35 years. I am grateful to have had this wonderful person in my life. I will miss Malcolm in so many ways, but I will remain appreciative of the many benefits of a humanitarian nature I witnessed him to have bestowed upon people and specifically life's lessons he unselfishly taught me. Thank you Malcolm, for all you did in making me a better person in life.
Tom Ruja
Friend
February 27, 2021
Showing 1 - 3 of 3 results