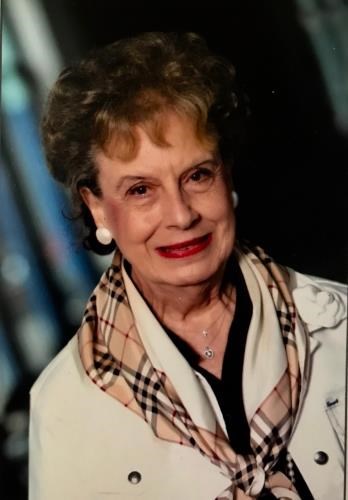 BORN
1923
DIED
2021
Margaret (Peggy) Delsol
12- 21-1923 to 10-11-2021
With heavy hearts, we announce the passing of our beloved Auntie Peggy.
Margaret "Peggy" Borges Delsol, a San Francisco Bay Area native passed away peacefully with her family by her side on October 11, 2021 at the age of 97.
Born Margaret Lucele Ferrera Borges on December 21, 1923 in Oakland, Calif. to father, Joseph Ferrera Borges of the Azore Islands in Portugal and mother Lucele Vietro of Italy.
Peggy grew up in San Leandro, Calif. as the eldest sister of three siblings. Isabella " Elizabeth" Borges, (nearly 4 years younger) and Joseph "Joe Jr." Borges Jr. (nearly five years her junior).
After graduating from the College of the Holy Names in Oakland, Peggy began teaching elementary school in 1945. Shortly thereafter, she married Jack Walton and had their only child. Mark Stephan Walton. Eventually their marriage ended in divorce. Several years later, Peggy married Emile John Delsol and resided in Piedmont, Calif. for many years until his death in 1993.
After moving to Rossmoor in Walnut Creek, Calif., Peggy immersed herself into activity. Joining several social clubs ( her favorite, Rossmoor Antique Club), traveling, volunteering at St. Annes Church and making many friends.
Talented in interior decorating, with a spectacular eye to detail and deep knowledge of antiques, Peggy's homes in Rossmoor, Piedmont and Carmel were decorated with professional flair.
Peggy reveled in family, friendship, learning and simple pleasures through her entire life. "Everything in Moderation" was her motto and she steadfastly lived by it. A devout Catholic, Peggy accredited her unwavering faith to see her through life's ups and downs.
Graceful and elegant, always beautifully dressed, Peggy was a woman of immeasurable style. She will be remembered for her intelligence, stellar memory, warmth and kindness.
The loss within the Borges, Delsol, Reich and Bellomo families will forever be felt. We would like give our deepest Thanks and Gratitude to Helen and Richard Doldol for the excellent care they provided in Peggy's final years.
As per Peggy's request, she was cremated and entombed beside her late husband Emile John at St. Mary's Cemetery in Oakland, Calif. A Memorial Mass will be held in her honor and will take place at St. Annes Church in Walnut Creek (Rossmoor) Calif. on Saturday, January 15, 2022 at 11am.
May you rest with the Angels, Beloved.
Published by San Francisco Chronicle from Dec. 6 to Dec. 12, 2021.
To plant trees in memory, please visit the Sympathy Store.
MEMORIAL EVENTS
Jan
15
Memorial Mass
11:00a.m.
St. Annes Church
Walnut Creek, CA
MAKE A DONATION
MEMORIES & CONDOLENCES
0 Entries
Be the first to post a memory or condolences.