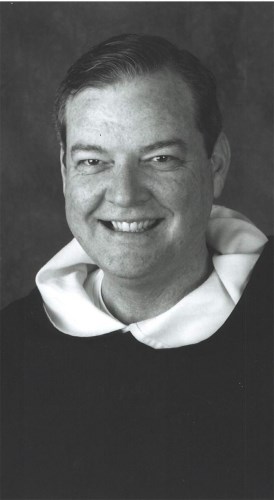 BORN
1949
DIED
2016
Fr. Michael Thomas Morris, O.P.(66) of Berkeley, California, passed away July 15, 2016. He was born October 19, 1949 in Santa Monica, California to Charles and Betty (Kuykendall) Morris. Father Michael received his BFA from the University of Southern California in 1971 and entered the Order of Friars Preachers for the Western Dominican Province that same year. He was ordained a priest April 23, 1977. Father Michael was awarded his MA in Art History from the University of California, Berkeley in 1981. He studied at the Courtauld Institute of Art, London, in 1982 and he earned his PhD in Art History from UCB in 1986. In 1991 his highly acclaimed biography "Madam Valentino: The Many Lives of Natacha Rambova" was published by Abbeville Press. Since 1998 his widely-read articles on religious art and iconography have been published by Magnificat. He taught at the Dominican School of Philosophy and Theology, Berkeley, and served as Director of the Santa Fe Institute, Berkeley, until his death. Father Morris is survived by his sister Patricia (Paul) Chamberlain; and by his brother Timothy (Victoria Chavez) Morris and his nieces and nephew: Kathryn Chamberlain; and Andrew, Claire, and Emily Morris. Funeral services for Father Michael will be as follows: Viewing (Thursday, July 21, 6:30 pm), Vigil Service (7:30 pm), and Funeral Mass (Friday, July 22, 10 am), all at St. Albert's Priory, 5890 Birch Court, Oakland, CA. Burial immediately follows the Funeral Mass at the Dominican Cemetery, Benicia, CA, with reception at St. Dominic's Church, Benicia, CA. Donations to support and develop Father Morris's projects may be made to the "Father Michael Morris Memorial Fund" at Western Dominican Province, 5877 Birch Court, Oakland, CA 94618 Or you may visit operation.org/frmichaelmemorial to donate securely online.
Published by San Francisco Chronicle from Jul. 19 to Jul. 22, 2016.
To plant trees in memory, please visit the Sympathy Store.
MEMORIAL EVENTS
Jul
21
Viewing
6:30p.m.
St. Albert's Priory
5890 Birch Court, Oakland, CA
Jul
21
Vigil
7:30p.m.
St. Albert's Priory
5890 Birch Court, Oakland, CA
Jul
22
Funeral Mass
10:00a.m.
St. Albert's Priory
5890 Birch Court, Oakland, CA
Jul
22
Burial
Dominican Cemetery
Benicia, CA
MAKE A DONATION
MEMORIES & CONDOLENCES
29 Entries
Enjoy your Angel Wings! You served the Lord well. You will be missed. ♡♡
Sandy Irvine
September 5, 2016
Your service to the faith will not be forgotten. I will miss your explanations of these great masterpieces each month. May your soul rest in peace with Jesus.
John Seiler
August 29, 2016
I so enjoyed his illumination on the beautiful sacred art in each issue and I really admired his writing. He impressed me as an erudite and refined man. I will miss him. May he now be in the house of our Father.
Kathleen Sullivan Fresne
August 29, 2016
May you rest in peace. God Bless you Father.
Deborah Carr
August 27, 2016
Fulton Clark
August 25, 2016
So sad to hear about Fr. Michael's passing. I have been a subscriber to the Magnificat for several years. Upon receiving a new copy I always looked for the new artwork & read his wonderful commentary.Sharing his wonderful art history with us tells us so much about him. I most certainly will miss this. Praying for him & his loved ones. I will forward to reading his new book.Thank you for letting us get to know a little about him.

Susie Lucero
Hayward, California
August 24, 2016
Thank you Fr. Michael.........
Ed and Beverly Kramer
August 24, 2016
I LOVED THE COMMENTARIES HE MADE ABOUT SACRED ART, HE SURE WAS A VERY OUTSTANDING SCHOLAR AND RELIGIOUS INDIVIDUAL AND HIS KNOWLEDGE OPEN A NEW DOOR TO INCREASE MY FAITH. I CAN'T WAIT TO READ HIS BOOK SOMETHING THAT I WILL TREASURE FOR YEARS TO COME. MY SINCERE CONDOLENCES TO HIS FAMILY AND MAY HE REST IN PEACE FACING OUR LORD JESUS CHRIST.

MIREYA GUTIERREZ
FRESH MEADOWS,NEW YORK
August 24, 2016
I have greatly enjoyed Fr. Michael's writings in Magnificat every month and will miss them. I will remember him in my prayers.
Patricia Burr
August 24, 2016
Always enjoyed his art commentary ! This was an important part of the monthly spiritual content
I will miss his work and look to owning his book
Mary ARIENS
Mary Ariens
August 24, 2016
Mary Brinckerhoff
August 24, 2016
May you rest in peace in the love of Jesus and the blessed Virgin Mary. Paradise rejoices with your presence!
Consuelo Bex
August 24, 2016
ALTHO I DIDN'T KNOW FR. MORRIS, OR HAVEN'T READ ANY OF HIS WRITINGS, HE SOUNDS LIKE A WONDERFULLY SPIRITUAL AND LEARNED MAN, DEVOTED TO JESUS' MOTHER MARY. I'M SURE HE IS NOW WITH JESUS AND MARY, ENJOYING HIS REWARD FOR ALL OF HIS WORK HERE ON EARTH!!!!
August 24, 2016
Never having personally known Father Michael I felt his presence while reading his very scholarly but mostly spiritually enlightening art history commentaries in the Magnificat. This wonderful smiling countenance of his (on the picture to my left as I write)is so reassuring of his goodness and joy. I will certainly miss his contributions to the Magnificat. Perhaps one could consider publishing his commentaries along with the work of art?

May you rest in peace. Be assured of our prayers as we ask yours dear Fahter.
Mary Wilhelmy
August 24, 2016
I love everything about Magnificat, but the first thing I do when I receive the latest issue in the mail is to check out what another magnificent artwork is featured in the back and to read Fr. Morris' commentary. It was always entertaining and informative. Boy, I'm gonna miss him a lot. Rest in peace, dear Father.
Jess
August 24, 2016
Please accept my sincere condolences to the Morris Family and his brother Dominicans. As a Vincentian serving in the Republic of Panama, I know many people of both the English and Spanish language communities had the privilege of reading Fr. Morris' articles in MAGNIFICAT - which allowed us all a motivation for prayer.In grateful appreciation to God for the gifts given your brother and generous ministry, may the Lord permit him the fullnes of joy in His Kingdom.John Carney, C.M.
John Carney
August 24, 2016
A good job wel done thank you. Prayers. GodBless
August 24, 2016
I am so very heart struck of this news of Fr. Morris' passing. Over the years, I have been truly, in every sense of the word, moved in my heart and in my soul, by his tremendous contribution to my daily reading of Magnificat. Honestly, I can't even part with the my little books for a few years, because they are that rich to me. Art, Music, language (Truth) and Beauty are each a powerful expression to connect with the Divine. I've been so grateful for Fr. Morris' work! I look forward to being immersed in his final book and I will be praising God for rising up such a fine man to bless so many people while he lived on this earth. He helped me to be a better person. I'm sorry his time here was so suddenly over. My deepest condolences.
Sylvia Stratford
August 24, 2016
I find God in the Magnificat art works with the best discussion by Father Michael of the meanings. He was great at identifying the subtle nuances . We were all given a gift in his vocation. Noreen Smith
Noreen Smith
August 24, 2016
I will miss his kindness and great speeches!
Esteban Domingo
August 10, 2016
I had the pleasure of meeting Fr. Michael on several occasions and each time was a delight. While our discussions involved our mutual interest in Natacha Rambova and Rudolph Valentino, we also discussed spirituality, films, art and even gossip. He was an erudite man, a man with great humor and a terrific writer. His biography of Natacha Rambova will remain a standard, a high bar of scholarship. I'm terribly sad to learn of his untimely passing.
Donna Hill
July 27, 2016
A gifted spirit who left us too soon. I was just talking with him last Sunday and I was ribbing him about Season 6 of Game of Thrones. I slipped and mentioned the epic battle scenes of Episode 9 and Father Michael Morris immediately zoned in that the character was not dead. Realizing my faux pas - I admitted that I shouldn't have spoilers - he was upbeat as usual and stayed positive through the end. I have cried so much it's like a leaking faucet. I've relived our last conversation over and over again - there is something that he has employed me to do - a promise that I need to fulfill. Godspeed, beloved friend and cherished mentor.

Till we meet again,
M. E. Onglatco
July 24, 2016
It saddens me to hear of the death of Fr. Michael Morris. I have fond memories of him especially during the initial phase of St. Dominic's/San Francisco seismic rehabilitation project. He was my special guide to understanding the treasure trove of sacred art in the church.

May he rest in peace.

Antoinette Doyle
San Rafael, CA
July 21, 2016
Fr. Michael has left us much too soon. His cheerfully generous disposition, as well as his unique contributions to art and religion, will be sorely missed.
Bartholomew de la Torre, O.P.
July 20, 2016
Sweet potatoe pie wil always remind me of Father Michael's smile at receiving one baked by Alex. Not only will I miss his homilies but also his joyful presence.
Sharon Ceasar, OPL
July 20, 2016
May he live in peace!

Fr. Karl Gierse OP, Germany
Fr. Karl Gierse OP
July 20, 2016
Father Michael, it was an absolute blessing to have befriended you in the last year of your life. Your friendship was a constant source of inspiration to me. We always had so much to discuss, and I look forward to continuing our conversations in Heaven. You are a true patron of the artists. May the Face of Grace embrace you always. As you told me, "Onward and upward!"
Michael Walker
July 19, 2016
I will always remember being in your class on the History of the Dominican
Order. Father Brian Krumholz, O.P., who is now himself a professor at D.S.P.T., was one of my classmates in that class.
Joyce Calagos, O.P.L.
July 19, 2016
Will surely miss you Fr. Morris. You were a great teacher and friend at the GTU. May you rest in peace.