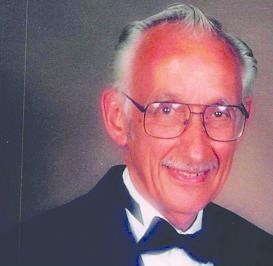 Michael Joseph Tomars (December 19, 1920 – March 3, 2020)
At the age of 99, Michael Joseph Tomars passed away peacefully at his home in Portola Valley on the morning of March 3, 2020 after living with a severe heart condition for several years. He was the second child born to Joseph Tomars and Aurore Tomars of Duluth, MN. Michael attended and/or graduated from Emerson Grade School, Jefferson Junior High School and Duluth Central Senior High School. He received a B.S. in Education from Minnesota State Teachers College in 1943, and B.A. in Accounting from LaSalle University in 1962. He married Gloria Fontana in 1960 after a blissful courtship of four months. Their only child, Michael Jr. was born in 1964. The Tomars family resided at the Fontana homestead in Colma until Gloria, Michael, and Michael Jr. relocated to Saratoga, CA, in 1973. The family ultimately settled at their current residence in Portola Valley, CA, in 1984.

As a child, Michael survived a serious bout with polio and was diagnosed with a severe cardiovascular issue, early challenges that strengthened his resolve and shaped his future. Michael's childhood began as the hardships of the Great Depression unfolded. On weekends, he shined shoes earning sometimes up to ten cents, which he used to purchase large bags of pastries and movie tickets to the Lake Theatre, a venue that screened his favorite cowboy pictures. As the nation's financial fallout worsened, his parents eventually lost everything. He oftentimes recounted breadlines that extended for city blocks. To assist his parents, Michael sold evening newspapers, efforts that helped put food on the table nightly. For every three newspapers he sold, Michael earned two cents. During senior high school, he worked in a grocery store earning a daily salary of two dollars. In 1939, he began his college studies at Minnesota State Teachers College and majored in speech and drama with minors in English and history. During this time, Michael became very active in his college's theatrical productions and held lead roles in many plays, including Victoria Regina and Vicky. He had a featured role in Historic Site Ahead, a popular weekly radio series on CBS affiliate KDAL. A potential move to Chicago for a career in radio was upended by the recent introduction of television.

At the age of eighteen, Michael took the U.S. Civil Service Examination for the position of U.S. Postal Clerk. Four years later, Michael received notice from the Postal Service to report for a physical examination. Despite being rejected by the U.S military for preexisting health conditions, the newer examination identified no medical conditions, and Michael began his 33-year career with the U.S. Government. On his first day, he lifted mail sacks weighing fifty pounds containing letters bound for soldiers engaged in military campaigns across Europe and Asia. One year later, Michael transferred to the San Francisco Post Office on 7th Street. During a subsequent annual physical, Michael learned that he had a serious heart condition and would not live beyond fifty. Given these challenges, Michael turned to religion and sought the advice of Reverend Thomas Merten, who suggested that he consider entering a monastery to determine if he could live the austere life of a monk. In April 1953, Michael boarded a train to visit Our Lady of the Holy Trinity, an abbey based in Huntsville, Utah. By the time the train reached Reno, Nevada, Michael concluded that he would confront his challenging medical issues and returned to San Francisco. After multiple medical tests, it was determined that an excessive amount of thyroxin created Michael's rapid heartbeat, which was ultimately corrected by the partial removal of his thyroid gland and corrective supplementation. With this problem solved, Michael developed new hobbies, including ballroom dancing and hiking. In his spare time, he served as the dance instructor for the Evening Social Club at Saint Boniface Church in San Francisco.

Over the ensuing years, Michael found long-term success in two careers. Prior to his retirement from the U.S. Government, he had ascended to General Manager, Systems and Programming Division, U.S Postal Service, a position within two promotional steps of possibly becoming one of the Assistant Postmaster Generals. In 1954, the Postal Service modernized and consolidated all payroll and accounting functions by establishing computer operations in five regional data centers that processed all accounting information for all post offices. In his capacity as General Manager, Michael held the number two position for the Western Region, a position he attained through a series of seven promotions that included Unit Payroll Supervisor (GS7), Branch Chief of Regional Payroll Operations (GS12), and Senior Computer Systems Analyst Programming Division (GS16). During his tenure, Michael moved his family to Washington D.C. for six months to head a project to computerize a manual operation for tracking postal revenues and expenses by class of mail service. At the end of his postal career, Michael was recommended for the Executive Director vacancy at the Midwest Region, but declined to pursue the opportunity since he did not want to distance his wife, a native San Franciscan, from her much beloved family in Colma, CA.

For his second career, Michael joined Catholic Charities of Santa Clara County in 1978 as its Director of Administration. Shortly thereafter, he was promoted to Chief Financial Officer, a position he held until his retirement in 1994. During his tenure, Michael negotiated successfully to acquire an acre of land for one dollar, on which the Eastside Senior Center resides, as well as successfully obtained a grant from the Cowell Foundation to ensure its construction. He also applied skills from his prior positions to establish a computer system within the agency. During his final years, he spearheaded the study for purchase of the agency's new headquarters on Zanker Road in Milpitas. For his final accomplishment, Michael partnered with a Stanford MBA group and venture capital interests to develop an income generating business to support the agency's mission.

During their marriage, Michael and his wife traveled extensively throughout the world, oftentimes accompanied by his brother-in-law, Elio Fontana and sister-in-law, Louise. He also enjoyed many voyages with his family to exotic destinations in the South Pacific. In 2009, Gloria peacefully passed away after staging a courageous battle with breast cancer for over three years. Throughout her diagnosis, numerous treatments, and days in the hospital, Michael provided the unrelenting love and affection that so defined their relationship. In his spare time, Michael enjoyed attending musical theatre and opera, and observing his son's unceasing obsessions with swimming and musical composition.

Despite advanced age and certain limitations, my dad served as an inspiration to younger members of his local community by highlighting life's positive attributes. He enjoyed the constant companionship of his son through the last day of his life. In his final years, my dad, or Mr. T as he became known within closer circles, often commented on how wonderful it was to be surrounded by so many younger friends who admired and loved him greatly. He truly appreciated the constant support of his son and care provider team, an undying effort that allowed him to remain in his home. My dad was also thankful for the personal attention rendered by his medical team at Stanford Senior Care. His charm and warmth will be sadly missed by family and friends. My dad will be remembered as an individual who triumphed in the wake of adversity, inspired others to seek out the positive aspects of life, and placed family ahead of personal gain or monetary reward. He is survived by Michael Jr.; his much beloved son; nephew, Mark Fontana; niece, Valerie Anderson; three grandnieces; and one grandnephew. He is also survived by cousins located in the United States, Canada and Italy. A chapel service will be held at 11:30 a.m. on Monday, March 16, 2020 at The Italian Cemetery, 540 F St, Colma, CA to be followed by entombment in the Fontana family chapel at the Italian Cemetery. A reception with refreshments will follow at 3:30 p.m. at The Ranch House, Portola Valley Ranch where attendees are encouraged to share their memories of my dad. In lieu of flowers, the family requests that contributions in the name of Michael Tomars be made to the American Heart Association or to the charity of their choice.

To plant trees in memory, please visit our Sympathy Store.
Published by San Francisco Chronicle from Mar. 12 to Mar. 14, 2020.
MEMORIAL EVENTS
Mar
16
Service
11:30a.m.
The Italian Cemetery
540 F St, Colma, CA
Mar
16
Entombment
Fontana family chapel
Italian Cemetery, CA
MAKE A DONATION
Please consider a donation as requested by the family.
MEMORIES & CONDOLENCES
1 Entry
May your memories of the wonderful times you shared with your loved one comfort you and your family, today and always.
American Heart Association
March 13, 2020
Showing 1 - 1 of 1 results