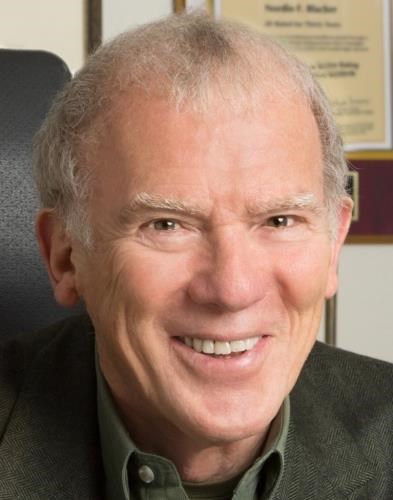 BORN
1937
DIED
2021
Nordin F. Blacker
June 8, 1937 - May 9, 2021
Nordin Blacker, of San Francisco, 83, passed away on May 9, 2021, from complications of Parkinson disease.
Nordin Francis Blacker was born in 1937 in Omaha, Nebraska to Harry and Sonya Blacker, who had come to the US as teenage refugees from what is now Belarus and Ukraine. The family moved to California after World War II following stints in Philadelphia and New York City. Nordin attended five grammar schools, three junior highs and one high school—Los Angeles High School, where he met his wife Donna. After high school, the two started college at the University of California at Los Angeles, and got married their sophomore year. Nordin transferred to an accelerated law program at the University of Southern California, where he obtained an undergraduate degree in 1961 and a law degree in 1963. After law school, he clerked for Judge Leon T. David of the Los Angeles County Superior Court.
In 1964, Nordin and his family moved to the Bay Area, and he took a job at the Santa Clara County Counsel's office, where he focused on social services and health care, and developed his life-long interest in legal issues for children and families. In 1969, he went into private general practice in San Jose, gradually specializing in family law—a good fit for his compassionate, grounded, and non-confrontational nature. He taught constitutional law at Lincoln University from 1965 to 1973 and at the University of Santa Clara in 1973, and served as president of the Santa Clara County Bar Association in 1980. While practicing in San Jose, he was also appointed as a part-time Federal magistrate, at the time—in 1971—the youngest-ever appointment to the Federal bench. He served in that position until he moved to San Francisco in 1986 to establish a new boutique family law practice. Nordin's Jackson Square practice was consistently viewed as one of the best in the city, discretely handling high profile custody, divorce, and adoption cases for families in San Francisco and around the Bay Area until his retirement in 2018.
Nordin was widely regarded as a lion of the family law bar, a top-flight litigator and an early adopter of mediation. He joined the American Association of Matrimonial Lawyers in 1977 and served as president of the Northern California Chapter and chairman of the National Council of Presidents in 1987. In 1981, once formal certification in family law was available, he became a Certified Family Law Specialist. He had a particular interest in child custody and adoption matters, and in 1980 took a contested adoption case to the U.S. Supreme Court. Throughout his career, he mentored many young lawyers as summer clerks, associates and junior colleagues, including his son David Blacker, also a certified family law specialist. He participated in dozens of continuing legal education panels on family law; was co-author or consultant on multiple family law textbooks and practice guides; and taught family law and trial advocacy at law schools throughout the Bay Area, including Stanford, Hastings, and the University of San Francisco.
Nordin saw his position as one of privilege and felt an obligation to pay it forward. He volunteered his time with the Santa Clara and San Francisco Bar Associations' pro bono projects. He served as pro tem judge, settlement master, and Federal Early Neutral Evaluation mediator. He served on the board of directors of the Association of Family and Conciliation Courts and of Legal Aid, and on the advisory boards of Suicide and Crisis Service, Adult Protective Services, and others.
Nordin was a devoted and beloved husband, father, and grandfather, and was a cherished friend to many. He was an avid reader of history, a gourmand, a jazz enthusiast, a green thumb, and a political junkie. He was also known for his sense of humor, with a perfect Jewish joke for any occasion. Nordin will be remembered as a consummate gentleman, generous with his time, wise, warm, and kind. He will be missed beyond measure.
He leaves behind his wife of 65 years, Donna, their children Deborah and David, Deborah's partner David Brown, David's wife Rani Spudich, and four grandchildren: Nathan Richardson, Lida Richardson, Anjali Blacker, and Alexander Blacker.
If desired, friends may make memorial contributions to The Michael J. Fox Foundation, the Sierra Club, or the American Civil Liberties Union

Published by San Francisco Chronicle from May 19 to May 23, 2021.
To plant trees in memory, please visit the Sympathy Store.
MEMORIAL EVENTS
To offer your sympathy during this difficult time, you can now have memorial trees planted in a National Forest in memory of your loved one.
MAKE A DONATION
Please consider a donation as requested by the family.
MEMORIES & CONDOLENCES
0 Entries
Be the first to post a memory or condolences.