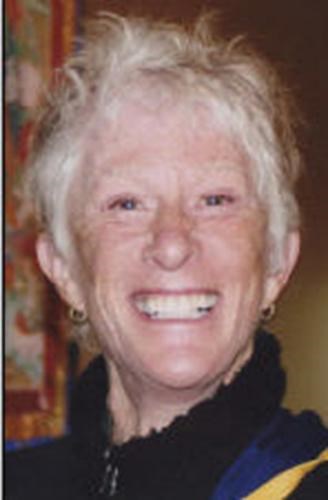 Our darling Pamela Krasney died peacefully at home in Sausalito, California - unexpectedly, suddenly and far, far too soon - on the evening of June 9, 2015, of heart failure, concluding a brave and sustained battle with AL Amyloidosis, a rare, incurable disease of the blood plasma. A Buddhist Sukhavati ceremony was performed for her on June 13, at Fernwood Cemetery in Mill Valley, California, and her ashes will be distributed by her family in places that she loved or that held importance for her.

Pamela was an extraordinary woman, abounding in compassion, courage, humor, integrity, intelligence, wisdom and beauty. It was our good fortune to have her in our midst for more than 71 years. Born in Detroit, Michigan in 1943, she moved with her family to Northern California in 1951 and graduated from Santa Catalina School for Girls in 1961. Pamela was an innovative, catalytic and deeply authentic social activist for more than half a century, starting with her participation in the Free Speech Movement at the University of California, Berkeley, where she was an art history major in the mid-nineteen-sixties.

She had an uncanny ability to bring together people and things in unexpected juxtapositions that no one else would have imagined, but that once she made the association, felt inevitable. She had boldness, prescience and a quiet unselfconscious bravery that put her on the front lines of social change, whether making an early commitment to battle violence against women, caring for those afflicted by the HIV/AIDS scourge, or campaigning to end the Death Penalty and reform the racist American criminal justice system. In these public endeavors, Pamela made important contributions - often away from what was accepted as the center - by contributing her credibility, service and resources to what she believed needed to become the center, working while the world caught up.

It was in her personal life that Pamela was her most magnificent. She had an amazing and steadfast gift for friendship, sparked it instantly, shared it widely and lit up the world around her. The Dalai Lama once said that he had never met a stranger; the same was true of Pamela. She had more best friends than anyone, and she was exactly the same with everyone. She was born into privilege, but hardly ever invoked it, except to park wherever she pleased, no matter the signage or curb color, and to drive without regard for speed limits and painted lines. This was consistent with her general disregard for boundaries.

After Berkeley, Pamela moved to the Haight-Ashbury neighborhood of San Francisco and became involved with the Diggers and the San Francisco Mime Troupe. Following her relocation to New Mexico, which she always loved, Pamela became a devoted Tibetan Buddhist practitioner in 1974 and lived for the next decade in Boulder, Colorado, where she was a student of Chogyam Trungpa, and worked for and attended Naropa University, earning an MA in Contemplative Psychology in 1983, while also employed at a women's shelter. Pamela was a key member of Naropa's Board from its inception in 1984, much of that time serving as the Development Chair.

She returned to California to marry in 1984 and became active in the HIV/ AIDS community, initially as a caregiver and eventually as the Chair of the Marin AIDS Project. Starting in 1998, when she befriended and began to work with Jarvis Masters, a wrongfully-convicted Death Row inmate at San Quentin State Prison, Pamela was a fervent advocate for criminal justice reform. She served for many years on the board of Death Penalty Focus, was active in Human Rights Watch and was a director of the Prison Mindfulness Institute. She was a founding member of the Advisory Board of Dalai Lama Fellows, a global initiative to support mindful, compassionate and ethical social innovators: people like Pamela. Her Buddhist teacher at the time of her death was Anam Thubten of Dharmatu.

Pamela's husband of 31 years, Marty Krasney of Sausalito, California, said that theirs was a marriage made in heaven, which neither of them believed in. Pamela Krasney's other surviving relatives include daughter Samantha Sanderson (Charles Cammack IV) of Oakland, California, son Parker Krasney (Allison McCullough) of Brooklyn, New York; two grandsons, Walker Cammack and Hudson Cammack of Oakland; and her mother, Mary Webber Parker of Bloomfield, Connecticut.

It isn't right, it isn't fair, that Pamela is no longer alive, that we will never again hear her buoyant, contagious laughter; see her gorgeous hair or her wonderful smile; or be in the presence of her vitality, inspirational humanity, ferocity, wisdom and grace. All that we can do now is try to be more like her.

Gifts in Pamela's memory can be made to Dalai Lama Fellows (http://www.dalailamafellows.org), Naropa University (http://naropa.edu) or the Prison Mindfulness Institute (www.prisonmindfulness.org).

Published by San Francisco Chronicle from Jul. 29 to Aug. 2, 2015.
To plant trees in memory, please visit the Sympathy Store.
MEMORIAL EVENTS
To offer your sympathy during this difficult time, you can now have memorial trees planted in a National Forest in memory of your loved one.
MAKE A DONATION
MEMORIES & CONDOLENCES
9 Entries
The world needs trailblazers like Pam. She forged ahead and fiercely followed her beliefs to improve human injustices. She was a dear friend starting in high school.She fills my heart in remembering her and the full meaningful life she lived. I miss my very dynamic, compassionate and kind friend and her contagious laugh!
I send love to her family and friends,
Kathy Foy ❤
Kathy Foy
Friend
July 23, 2020
Though I did not know Pam beyond meeting her once, I was inspired by her bright spirit and her truly remarkable work in the world over the years. Marty, please know my heart is very much with you and the rest of your family at this poignant time.
Elise Miller
August 17, 2015
It is shocking to hear that Pamela is no more. I guess, I am fortunate to know her, speak to her, and learn from her on two occasions. She was so lively and always helpful. My condolence to Marty Krasney and other immediate family members.
Prabhakar Jayaprakash
August 17, 2015
I am so sorry to hear this sad news. My thoughts are with you, Marty, and with your family.
Betty Sue Flowers
August 17, 2015
I am so glad to have learned more about all the wonderful things that Pamela did. She is truly an inspiration and I feel very lucky to have known her. My deepest condolences to the entire Krasney family.
Serra Butler Simbeck
August 9, 2015
Wishing the very best to the Krasney family. Deseando lo mejor.
Jose Gonzalez
August 3, 2015
Pam was a leader in all that she did and excelled in the role whether it was president of the student body at Santa Catalina, a leader in the Free Speech Movement, setting up programs to feed the hungry, advocate for positive change for human rights, prison reform only to name a few. Pam's extreme generosity and kindness gave hope to those who were struggling. She was a devoted wife, dedicated mother and grandmother. She was a loyal and treasured friend to many. Her spirit is with all whose lives she touched. Pam and her ebullient personality is greatly missed. My love and support is extended to her family.
Kathy Foy
August 3, 2015
As we did not know Pamela, we can only marvel at her wonderful spirit and personality, and her extraordinarily meaningful life.

We are very sorry for your loss.