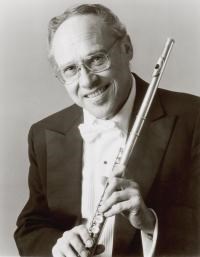 FUNERAL HOME
Duggan's Serra Mortuary
500 Westlake Avenue
Daly City, CA
Paul E. RenziPassed away on December 16, 2014 with family by his side. Beloved husband of 49 years to Roberta; loving father of Paul, Michael, Teresa, Laurinda, Matthew and Carla; grandfather of 7 and great grandfather of 1.

Preceded in death by his first wife of 16 years, Muriel Demers, his older brother Renzo and nephew Allen Umber Renzi. He is also survived by his younger brother, John, (Betty), four nieces and their children.

Paul was born in New York City on February 25, 1926 into a long line of classical musicians, dating back to Italy. He started his professional career at the age of 17, after attending Julliard and Queen's College. Paul performed as principle flautist, alongside his father, oboist, Paolo in Arturo Toscanini's NBC Symphony, as well as the Symphony of the Air. He was the principle flautist in the San Francisco Symphony for over 50 years, and a professor of music at San Francisco State University.

Besides his love of music, Paul was an avid reader and a fan of opera and baseball-playing catch until he was eighty, with his buddy, Herb.

A Memorial Service will be held on Tuesday January 6th at 7pm at Duggan's Serra Mortuary, 500 Westlake Ave, Daly City. Friends and colleagues are welcome to come and share stories of Paul.

In lieu of flowers donations may be made to The American Diabetes Association or The San Francisco Boys and Girls Club.

Published by San Francisco Chronicle from Jan. 2 to Jan. 4, 2015.
MEMORIAL EVENTS
Funeral services provided by:
Duggan's Serra Mortuary
MAKE A DONATION
MEMORIES & CONDOLENCES
4 Entries
My thoughts and prayers are with you in your time of grief. May your memories bring you comfort.
January 5, 2015
Rest in peace my dear brother. As were were growing up, I remember the hours you spent dedicated to practice and perfecting your play. Those hours sure paid off because your music brought joy to everyone who heard you. Your playing was brilliant! Your loving brother, John
John and Betty Renzi
January 5, 2015
Laurinda and family,
Friends who love you surround you...
Johnny,renee,Vince,Erica sollini
January 3, 2015
May your hearts and minds be filled with wonderful memories of joyful and loving times together as you celebrate a blessed life well lived.
Andrea Renzi Harvey
January 3, 2015
Showing 1 - 4 of 4 results