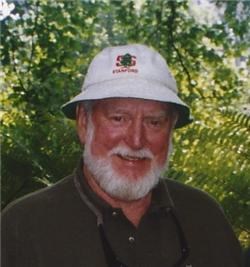 BORN
1926
DIED
2012
FUNERAL HOME
Spangler Mortuaries Los Altos Chapel
399 S. San Antonio
Los Altos, CA
Peter James Duignan Jr. distinguished scholar, competitive athlete, loving husband and father of six died peacefully November 17 at The Forum in Cupertino. Surrounding him in a sea of love at his bedside were Frances, his beloved wife of 63 years, and many of his children and grandchildren. He was 86.

Born August 6, 1926 to Peter James and Delia, he was the first born and only son. Raised in San Francisco's Mission district, he and his three sisters Pat, Joan, and Frances were raised with the hard working Irish of the city. His father was a 25-year veteran of the Fire Department. Peter went to St James with many of the Catholic boys of the Mission. He proudly spoke of being part of the St. James Mafia and always referred to himself as working class throughout his life.

Peter was graduated with honors from the University of San Francisco in 1951. He then headed south to The Farm with his wife Frances and first of many children to pursue his MA and PhD in history from Stanford University. He never left.

1957-1959 Peter was awarded a Ford Foundation Grant to study Native Policy in Africa. He used the grant to take the family, including his wife and four children at the time, to Rhodesia (now Zimbabwe) to research and study what would be his life's work, the study of Colonial Sub Saharan Africa.

Peter's academic talents led to many top awards. These included a Rockefeller Foundation International Fellowship (1963-64), A Guggenheim Fellowship (1973-74), and then a three-year grant from the National Endowment for the Humanities (1973-75). These were followed by fellowships at Jesus College at Cambridge, St. Antony's College at Oxford and the Institute of Advanced Study at Princeton.

Over the course of 50 years Peter built a stellar academic career at Stanford and Hoover Institution. In 1959 he was named curator of the African Collection at Hoover and Director of its African Studies program from 1965 onward. In 1966 he was appointed Curator of Africana of the entire University and built a collection of African letters and documents that still rank among the top five African research archives in the country.

In 1968, at age 42, he was named to the Stella and Ira Lillick Curatorship at Hoover, the first endowed chair in the United States devoted exclusively to the study of Africa. At the time of his appointment, the Director of the Hoover Institute, Dr. Glenn Campbell, said of Peter, "His talent and energy overflow. He is not only a highly productive scholar, but also an acknowledged leader and educator within his profession.''

In 2008, Mike Wilkins and Sheila Duignan honored Peter and Frances through the endowment of a Distinguished Visiting Fellowship at Hoover


A prolific writer, Peter authored, edited or coauthored with his long time partner, Lewis Gann, over forty-five books on Europe, Sub-Saharan Africa, the Middle East, Modern European History, Islam, Hispanics in the United States, Immigration, US Foreign Policy and the European Union.
He wrote and edited them all in longhand, having never mastered the typewriter or computer keyboard.

While he took great pride in his academic career, Peter often said he hoped to be remembered for his athletic prowess. He said winning the Stanford University campus volleyball championship was perhaps the highlight of his Stanford years. He claimed to have served 13 straight aces to drive his team to the campus championship in 1968, but that was before ESPN so no definitive records were kept.

In his later years he was often seen on television, giving spot on glimpses of foreign wars and historic background. He then parlayed his expertise in African and Middle Eastern history to be a lecturer and bon vivant on luxury cruise ships and Safari's to his beloved Africa. Frances was at his side throughout, charming people when the discussion got fiery.

The final trip to Africa came just four years ago. To celebrate Frances' 80th birthday and for Peter to say goodbye to his beloved Africa they took their children and all of their grandchildren on safari. It seared a love of the country for two more generations.

A social creature, Peter is remembered at the Hoover Institute for his spirited arguments, studious habits and a devilish sense of humor. For decades he would join small groups of scholars for tea and biscuits and debate everything from Nelson Mandela's role in the future of South Africa to the latest miscues of the Stanford football team.

Seven years ago Peter and Frances moved from their house and well-tended garden on the Stanford campus to the Forum, a retirement community in Cupertino. They enjoyed many friends and activities there while Peter continued to work at Hoover until physical infirmities prevented him from climbing to his Ivory Tower. His mind remained sharp until the end.

One month ago, he enjoyed his final public appearance at his granddaughter's wedding. He was hailed as our Patriarch, and led the party to a loud and raucous family cheer.
In his last days extended family made a steady parade to his beside to say goodbye to this charming rogue. He will be missed.

Peter is survived by his adored wife, Frances at The Forum, and six children: Kathleen Mary Duignan of Memphis, TN, Patricia Rose Duignan of Richmond, Peter Duignan of Mountain View, Claire Duignan Day of Berkeley, Rosie Duignan of Berkeley and Sheila Duignan, also of Berkeley. In addition he has ten grandchildren and a large number of nephews and nieces, all of whom feel the loss.
A 4 p.m. memorial service to celebrate Peter's life is planned for Tuesday, January 15, 2013 at Memorial Church on the Stanford campus.
Family and Friends are invited to gather at Hoover Institution at 3:45 that day to process to the church.
A reception following the service will be held at the Stanford Faculty Club

Donations in lieu of flowers may be made in Peter's name to Hospice or http://www.aidforafrica.org/girls

Published by San Francisco Chronicle from Nov. 25 to Dec. 2, 2012.
To plant trees in memory, please visit our Sympathy Store.
MEMORIAL EVENTS
To offer your sympathy during this difficult time, you can now have memorial trees planted in a National Forest in memory of your loved one.
Funeral services provided by:
Spangler Mortuaries Los Altos Chapel
MAKE A DONATION
MEMORIES & CONDOLENCES
5 Entries
Miss you every day.
March 1, 2013
Frances and Family,
We grew up together at Stanford Village where Dad and Peter shared school, sports and growing families. A few years ago Peter shared with me Dad's words, "Just keep your head down and go for the finish line." Dad died on Nov. 16th and Peter on Nov. 17th. Dad is waiting for him with a hug on the finish line. With all my love, thoughts and prayers for a beautiful man and his family. Margie Foster
December 2, 2012
RIP Peter, you were so full of life and a lot of fun to be around.
Ron Etheridge, Tucson Az.
December 2, 2012
Reading Peter's obit has brought back so many wonderful memories of growing up on Dolores St & having him as my second big brother. My deepest sympathy to you Frannie & all the family. Eleanor Gerigk
Eleanor Gerigk
December 1, 2012
Dr. Howard N. Brinton and Elizabeth S. Brinton pay tribute to a champion among men. We send our love and best wishes to the family.
Elizabeth Brinton
November 29, 2012
Showing 1 - 5 of 5 results