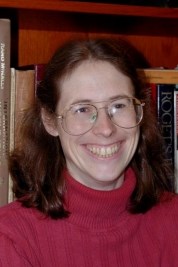 Randi Alexandra Engle
On Oct 26, 2012, Randi Alexandra Engle, 45, of Berkeley, CA died at home with her family after a 2 year battle with pancreatic cancer. A passionate and dedicated mentor, teacher, and researcher, Randi was Associate Professor in Cognition and Development in the Graduate School of Education at UC Berkeley.
Randi was born on May 12, 1967 in Ridgewood, NJ, and grew up there and in Colts Neck, NJ. A 1985 graduate of Marlboro High School, she was class salutatorian and a cross country and track star. She received her bachelor's degree from Dartmouth College in 1990 with a double major in Psychology and Mathematics after taking an extra year to volunteer as a teacher at the East Hill Farm and School in Vermont and on the Navajo Nation in Window Rock, Arizona.
Randi met her husband Thomas Kuhn while at Dartmouth. After becoming engaged, they confirmed their mutual love of the outdoors by hiking for two months on the Appalachian Trial. They married in July 1991 before moving to Stanford.
Randi received her PhD in Symbolic Systems in Education from Stanford University in 2000, welcoming the family's first daughter along the way. She then worked five years as a post-doctoral researcher at the Learning Research and Development Center at the University of
Pittsburgh. During this time, the family welcomed their second daughter and Randi found her spiritual home at the First Unitarian Church in Pittsburgh. There she continued a lifelong love of music as an active member of the family choir.
Randi subsequently joined the faculty in the Graduate School of Education at Berkeley in 2005, and was promoted to tenure in 2011. She was recipient of numerous professional and academic honors and awards, including an NSF CAREER grant, a Hellman Family Fund award, and a dissertation fellowship from the Spencer Foundation. Her studies of classrooms and of how discussions can be structured so that students can apply what they learn outside the classroom (known as "transfer") have changed the field's understanding of what teachers can do to make their lessons more powerful.
Just before her cancer was discovered, Randi introduced her new family to their Norwegian relatives, continuing a lifelong love of travel. Her last trip was just two months ago to Hawaii to enjoy the spectacular scenery and revel in life despite progression of her disease.
She is survived by her
husband, Thomas Kuhn, and their daughters Rebecca Engle and Gwendolyn Kuhn, all of Berkeley, CA; her brother Russell Engle, of Fremont, CA; her mother, Ingrid Eldridge, of Colts Neck, NJ; and her father, William Engle, and step-mother Kathy Engle, both of Dublin, NH. Her beloved step-father, Sheldon
Eldridge, predeceased her by just two months at age 96.
Her love of life, her family, and her work inspired everyone who knew her. Donations in lieu of flowers should be made to the Randi A. Engle Student Innovation Fund care of the Graduate School of Education at UC Berkeley. Memorial services will be held in the Alumni House on the UC Berkeley campus Friday, Nov. 9th at 2:00 PM. A second memorial is scheduled at the First Unitarian Church in Pittsburgh, PA Sunday, Nov 25th at 1:00 PM.

Published by San Francisco Chronicle from Nov. 1 to Nov. 2, 2012.
To plant trees in memory, please visit the Sympathy Store.
MEMORIAL EVENTS
To offer your sympathy during this difficult time, you can now have memorial trees planted in a National Forest in memory of your loved one.
MAKE A DONATION
MEMORIES & CONDOLENCES
4 Entries
Randi, I don't know if you could see what happened today, but it was beautiful....hundreds of people talking to each other, inspired by you, poems and music, tears and laughter, and research posters!
Andrew
November 9, 2012
Sincere condolences to Tom and the family. I am so proud of Randi and all she did on her own behalf as well as for others with this dreadful disease. Randi made such a positive impact on the people around her, as well as her chosen field of study. Though her time with us was short, her contributions were significant. She will be missed by many.
Donna Williams
November 8, 2012
Randi, we miss you. Your intelligent conversation and the way you cared about your family and students were amazing. I loved the way there was always something to add when we were talking on the phone.
Carol Dorf
November 3, 2012
Wishing you peace, sending you love, dear Randi.
Vera
November 2, 2012
Showing 1 - 4 of 4 results