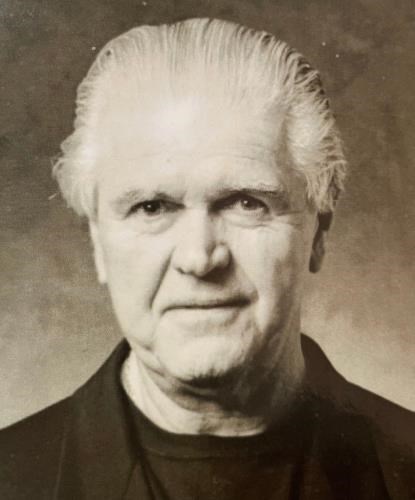 On Monday, April 19, 2021 Raymond (Ray) Leo Dennehy, loving husband, father, grandfather and friend, passed away at the age of 86.

Ray began his teaching career at the University of Santa Clara and was a Professor of Philosophy at the University of San Francisco for 41 years. He was honored with the distinguished title of Professor Emeritus. He had an incredible impact on his students guiding them as young adults. Many students commended Ray for his respect for diverse opinions as he offered thought-provoking conversations.

His areas of teaching and research interest were metaphysics, epistemology, and bioethics. Dennehy was frequently called upon to address contemporary ethical issues by universities and the media. He was invited to the University of California, Berkeley, for 50 consecutive semesters to debate abortion. He wrote and published 6 books, most recently A Philosopher Reflects on the Rosary which was released earlier this year.

Ray was an ardent runner and weightlifter and will be remembered for his storytelling, humor, writing, love for his family and devotion to his faith. Ray once mentioned, "at times we don't even see the plan God has for us, and for me, it's been to fight for life," a mission he would carry out "until I reach room temperature."

Ray was preceded in death by his brother, Patrick, and parents, Joseph & Mary Dennehy.

Donations in Ray's memory may be made to the Life Legal Defense Foundation.

Published by San Francisco Chronicle from Apr. 22 to Apr. 25, 2021.
To plant trees in memory, please visit the Sympathy Store.
MEMORIAL EVENTS
To offer your sympathy during this difficult time, you can now have memorial trees planted in a National Forest in memory of your loved one.
Funeral services provided by:
Duggan's Serra Mortuary
MAKE A DONATION
MEMORIES & CONDOLENCES
Sponsored by Duggan's Serra Mortuary.
8 Entries
I just learned of Ray's death. I have fond memories of being with him at meetings of the American Maritain Association. He had a magnetic personality. Never a dull moment around him. It took me a while to understand how much deeper his soul was, but I have immense respect and admiration for his commitment to the faith and to the defense of life. I pray for comfort for his family in the memories they must surely have of his kindness, his great humor, and his loyalty. RIP, Ray.
John Dunaway
Friend
July 14, 2021
In the early ‘90s, I met a man who was disabled and homeless without family. He was a resident in a hospice run by the Missionaries of Charity, in Washington, D.C. His name was Clete. He was from SF. He had been in business, but soon suffered a mental disorder, lost his job and fell into debt. He went through dark lonely times. Years later he wound up a resident in the Sisters’ home in SF. Eventually he was moved to DC. I told him about my time at USF. He asked, "Did you ever have Ray Dennehy as a teacher?" Clete said he was an undergraduate with Ray at USF. Years later, when Clete was indigent, Ray heard about it and, of course, helped Clete out financially and with encouragement. Clete was still thankful. He was finally in a better (place with the Sisters). Clete died many years ago, and I never mentioned our discussion to Dr. D. or anyone else. But it comes back to me quite fittingly, as I read, Dr. D’s commentary on the Second Joyful Mystery, in his book on the Rosary. I’m also reminded that I once emailed Dr. D. that I was raising five kids as a Catholic school teacher. He emailed back some embarrassing praise, then said: “The happiest time of my life was when I was raising four kids.” ---In Paradisum deducant Angeli (esp. St. Michael).
Thomas Bates
Student
April 27, 2021
Dr Dennehy was, as my sister-in-law Lenna would say: “a warrior in tweed, with a cigar saber.”

He fought the good fight with words. He was entertaining, eloquent, witty, handsome, & his piercing logic could knock anyone off of their horse to see the truth, which was always fun to watch.

The fruits of his dedicated teaching are now echoing into the generations of those he taught, and I can speak for the entire Hockel Clan when I say we are eternally grateful to him.
The world has suffered a great loss today, but it’s time for your heavenly reward, Dr D!
Barbara Hockel Lopez
Student
April 27, 2021
Those who contend philosophy is better left alone until middle age have not known Ray Dennehy as a teacher. How simple, pleasant, and life-changing was his Metaphysics course - for a 20 year old.

"To associate with Orpheus and Musaeus and Hesiod and Homer, how much would any of you give?

And certainly the greatest thing is that I would pass my time examining and searching out among those there - just as I do to those here - who among them is wise, and who supposes he is, but is not."
John Mallory
Student
April 27, 2021
Maryann, very sorry to hear of the passing of your husband. May he Rest In Peace.
Sheila Folan Cronin
Friend
April 25, 2021
No matter the concern or the difference of opinion , he listened. This is a trait we all need especially in these days
Lorraine Douglas
Family
April 24, 2021
For 44 years Ray was a true, compassionate and faithful friend. Above all I shall miss his sense of humor, which made me laugh like no other. "Good and faithful servant, enter into the joy of your Master!" --Fr Simeon Leiva
Fr Simeon Leiva
April 24, 2021
No words can describe Ray’s intelligence, wisdom, humor and the inspiration he provided his students, friends, and many others. His razor like logic combined with the balance of earnestness and humor made him unforgettable. I attended several of his debates at Cal as he defended the life of the unborn and even human life in general. He could debate with grace and reason. I took my sons to hear him. He will be greatly missed by many!
Patrice
Friend
April 23, 2021
Showing 1 - 8 of 8 results