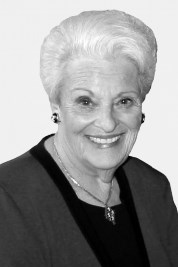 Reba Ginsburg
88, a long-time Piedmont resident, died peacefully on October 6, 2012, following a one week hospitalization for an illness. Reba attended Piedmont High School, Stanford University, and University of California Berkeley. She was married to the late Benjamin Altwarg who died in 1963, and then to the late Morris Ginsburg who died in 2008.
Reba was known as a woman with a deep passionate love of her family, a close bond with her sisters, and a strong relationship with her friends. She was a frequent mahjong player with friends and family. Reba loved going to the movies all her life as well as she was an avid reader who read many books each month. Reba talked daily with her children, her sisters, and often with her grandchildren.
Reba Ginsburg is survived by her daughter, Sharon Gordon (Ted); by her son, Daniel Altwarg (Carol); by grandchildren: Matthew Gordon (Iris), Darcy Altwarg, and Brian Altwarg; by her great-grandchild Madison Gordon; by her sisters: Lois Arnold and Janet Gordon (Murray) and by many nieces, nephews, and cousins.
Reba's father started the long time Oakland business, C.Markus Hardware. Her son, Daniel, and grandson, Brian now run the successor store which is Markus Supply-Ace Hardware near Jack London Square. Reba was a member of Temple Sinai in Oakland since 1952.
Funeral services will be held at noon on October 10, 2012, at the Home of Eternity at the Mountain View Cemetery, 5000 Piedmont Avenue, Oakland. In Reba's memory, donations may be made to Temple Sinai, 2808 Summit St. Oakland, CA 94609; American Lung Association, 424 Pendleton Way Oakland, CA 94621; or your favorite charity.

Published by San Francisco Chronicle from Oct. 8 to Oct. 9, 2012.
To plant trees in memory, please visit the Sympathy Store.
MEMORIAL EVENTS
To offer your sympathy during this difficult time, you can now have memorial trees planted in a National Forest in memory of your loved one.
MAKE A DONATION
Please consider a donation as requested by the family.
MEMORIES & CONDOLENCES
4 Entries
Our sympathies to the entire family...Reba was unique and spirited and will be missed.
Tom and Ginny Sharp
October 9, 2012
Reba was an exttraordinary woman, one whose memory I shall long cherish.
Maurice Engleman
October 9, 2012
My condolences to the family during your time of sorrow. May God comfort you and give you the strength to cope (Psalms 46:1).
October 9, 2012
Please accept my condolences on your loss.
Suzanne Oswald
October 9, 2012
Showing 1 - 4 of 4 results